When he finally removed his eye mask 72 hours later, he was dazzled by the brightness of his surroundings.
By Simona Kitanovska August 15, 2022
Facebook
Twitter
Linkedin
Email 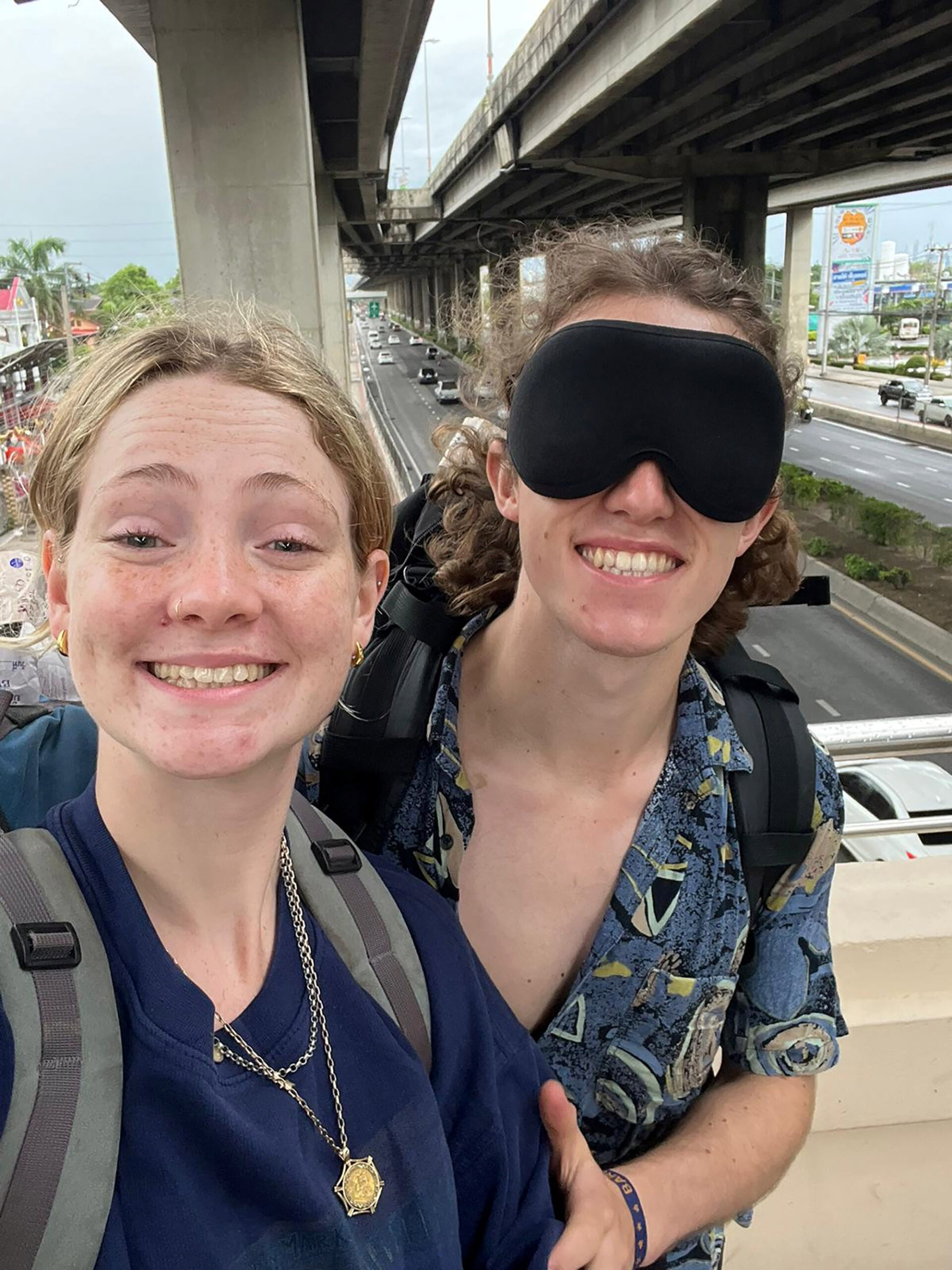 Brave Ed Smith and girlfriend Eimear Pickstone pose in an undated photo. Smith climbed a Thai mountain blindfolded during a three-day challenge to find out what his incredible sister who was born without sight faces every day. (Eimear Pickstone,SWNS/Zenger)

A devoted brother climbed a mountain blindfolded during a three-day challenge to find out what his incredible blind sister faces every day.

Brave Ed Smith, 21, said it was “pretty special” to walk in the footsteps of his blind-from-birth sibling, Harriet Smith, 31, while admitting the hair-raising feat was terrifying at times.

The student set out on the 72-hour adventure with his girlfriend Eimear Pickstone, 21, who helped him traverse rain-drenched hillsides and bustling cities in Thailand last month.

And during their epic voyage, his eyes were covered even when Pickstone accidentally spun their pick-up truck off the road, leaving him scared for his life.

Ed Smith said he had chosen to do the charity stunt in South East Asia – which has so far raised over $4,125 – to challenge himself in a non-English speaking country.

And when he finally took his blindfold off three days later, he said it first felt like he was “on drugs” before he was left with a massive sense of relief.

He said: “It was very weird when I finally took the blindfold off, almost like a hallucination experience. It was like I was on drugs, but after that, I was over the moon.”

“When Eimear ended up crashing the car on the road, it was probably the most terrifying thing that’s happened to me.

“But my sister gave me a lot of strength, knowing what I was doing was just a drop in the ocean of the life she has forged for herself in a world that’s not amenable to people without sight.”

“She was in the forefront of everything I was doing. It was pretty special finding my feet in her world.”

Smith, from the rural village of Moreton Pinkney, Northamptonshire, in the South Midlands of England, in the United Kingdom, started his Challenge on July 11, near the town of Kanchanaburi, on the west of Thailand.

He then went onto the capital Bangkok before taking a sleeper train to the northern city of Chang Mai and climbing the mountain of Doi Suthep on his final day, July 14.

But the Cambridge University philosophy student explained that he had in fact wanted to spend a whole week blindfolded before his girlfriend talked him out of it.

Smith said: “The main reason for doing it abroad is it’s more of a challenge.

“I wanted to push myself as hard as I could, and I was thinking about doing it for a week. But Eimear talked me out of that.”

Pickstone, who had planned the three-month summer holiday with Smith – through Thailand, Laos, and Vietnam – said when he revealed his plan, she thought it was crazy.

She added: “I definitely did not help come up with the idea. I thought he was crazy, so I said, ‘No, three days is enough!’”

The couple spent every day he was blindfolded together, with Smith fully dependant on Pickstone for food, shelter and navigation around the country.

Smith said: “I’m a very independent person, so having to ask Pickstone to help me with every single aspect of my life was pretty tricky a times – from brushing my teeth to shaving.

“It was really, really tough, and I learned how trusting blind people are with those around them.

“Everyone focuses on the climb, but the psychological experience of the three days was really the toughest part of the challenge.”

While driving through a rural area of the country, near Bangkok, Pickstone lost control of a car she’d borrowed from a local friend, and the pair skidded into a ditch.

Pickstone explained: “We were driving along this mountain road, and it just started to rain a lot. The windscreen wipers didn’t’ work and the windscreen was getting very muddy.

“To me, it felt like we were driving along a cliffside. Then we just lost traction and spun 180 degrees.

“In my head, we were falling off the side of a mountain. I did think that was the end for me. But we were just lodged in a ditch.

He added: “That was the single most scary thing that has happened to me in my life.”

Pickstone was rescued by 15 local Thai men, who then helped pull his truck out of the levee, but this was one of several occasions when he believes he was hallucinating.

He said: “My world morphed into a very strange sensory state.

“At first, I was learning the ropes, learning to navigate this usual world. Then the things I was visualizing were pretty vivid.

“I created this visual picture in my head the whole time. I was really living in this strange vivid world to the extent I was almost hallucinating.”

Smith and Pickstone arrived in Chang Mai on their final day, before making the 5,499-foot journey to the top of Doi Suthep in treacherous conditions.

Smith said: “During our ascent of the mountain, it was pretty treacherous. But the sounds of the jungle with the rain was the most sensory stimulating period of the three days.”

And when Smith finally removed his eye mask 72 hours later, he was dazzled by the brightness of his surroundings but thankful he could take everything in once again.

He said: “I was struggling to cope with it for about 20 minutes, but everything was so beautiful eventually.”

Pickstone added: “I was so happy to see his face. It was almost like I’d forgotten it.

“He couldn’t see anything when he first took it off for a while. But it felt really quite emotional. I felt a bit teary.”