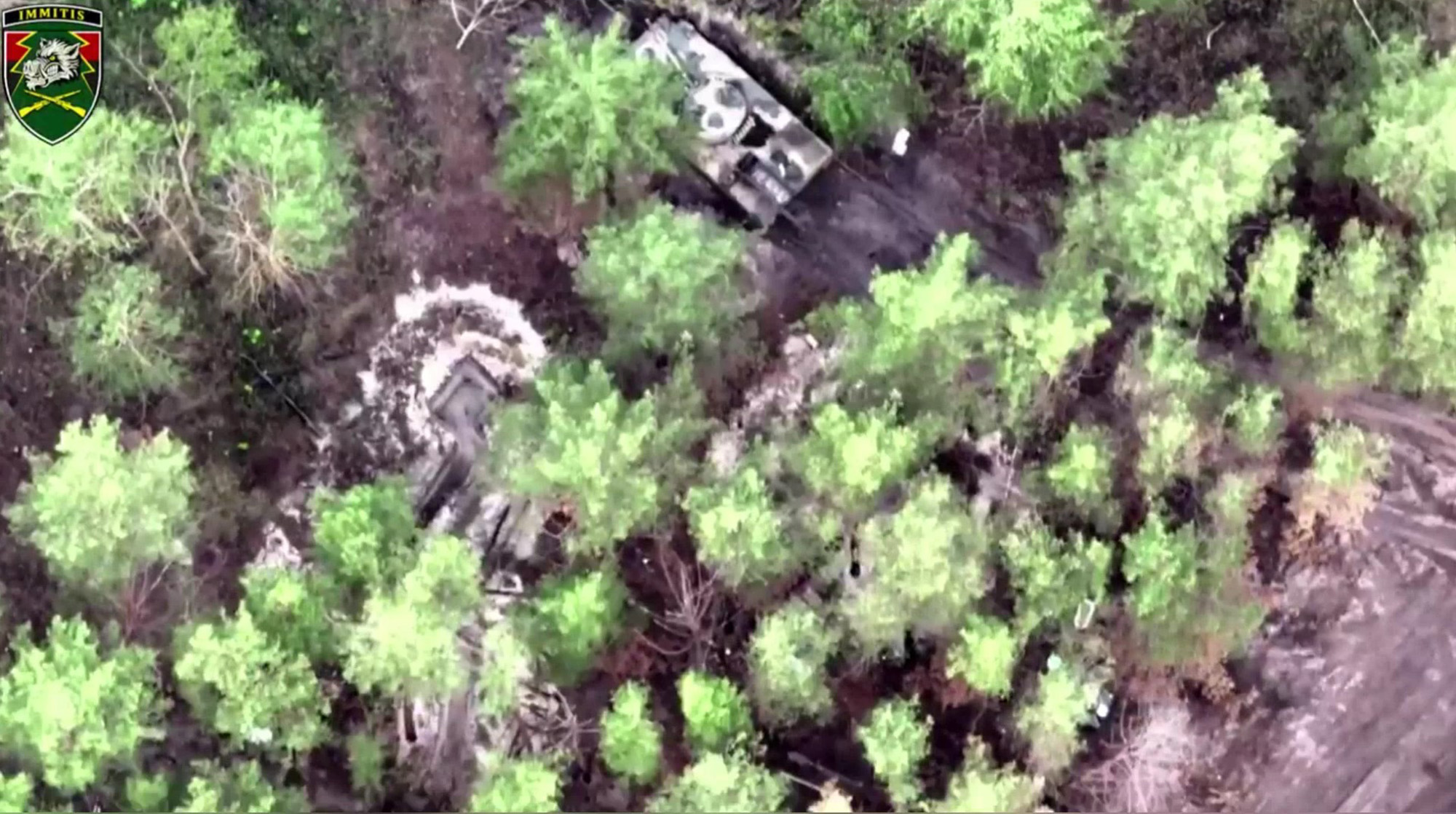 Russian infantry fighting vehicle stands near Russian stronghold hidden among the trees in a forest area of Ukraine in an undated photo. Russian occupiers were detected by aerial reconnaissance of the 71st separate jaeger brigade with help of an unmanned aerial vehicle (UAV).  (@71brigade/Zenger)

These images show how Ukrainian troops found a Russian headquarters hidden in a forest using a drone before laying waste to tanks and armored vehicles that were camouflaged under the canopy.

The footage – caught by a drone from the 71st Separate Hunting Brigade – shows tanks and other armored vehicles camouflaged in the forest in fortified defensive positions somewhere on the Ukrainian front lines. A soldier can be seen walking past one of the vehicles.

Some of the Russian armor can be seen sporting the now infamous ‘Z’ symbol.

The footage then shows the area being hit by Ukrainian ordnance, with the vehicles reportedly destroyed.

Smoke can be seen rising into the air from at least three of the vehicles before the footage ends. The footage reportedly shows at least two Russian BMP-3s. The BMP-3 is a Soviet and Russian infantry fighting vehicle that is not unlike a light tank.

The Ukrainian troops also reportedly destroyed a BTR-80 in the attack, although it is not seen in the footage. Its smoldering remains were visually confirmed after the attack, according to the Ukrainian military.

The BTR-80 is a wheeled amphibious armored personnel carrier that was first developed by the Soviet Union.

The footage was obtained from the 71st Separate Hunting Brigade – also known as the 71st Separate Yeger Brigade – on Thursday, August 11, along with a statement saying: “Rashist armored vehicles are on fire, the enemy platoon stronghold is destroyed, and the orcs are running panicked through the bushes. The drones of the 71st hunting brigade again hunted the prey and aimed our artillery at it.”

‘Rashist’ is a term that is often used by the Ukrainian forces when referring to the Russian invaders. It is a combination of the words ‘Russia’ and ‘fascism’. Ukrainian troops also often refer to the invading Russian forces as “orcs”.

Zenger News contacted the Ukrainian military and the head of the public relations service of the Ground Forces Command of the Armed Forces of Ukraine, Major Fityo Volodymyr, who confirmed that the footage was authentic and that the information was accurate.