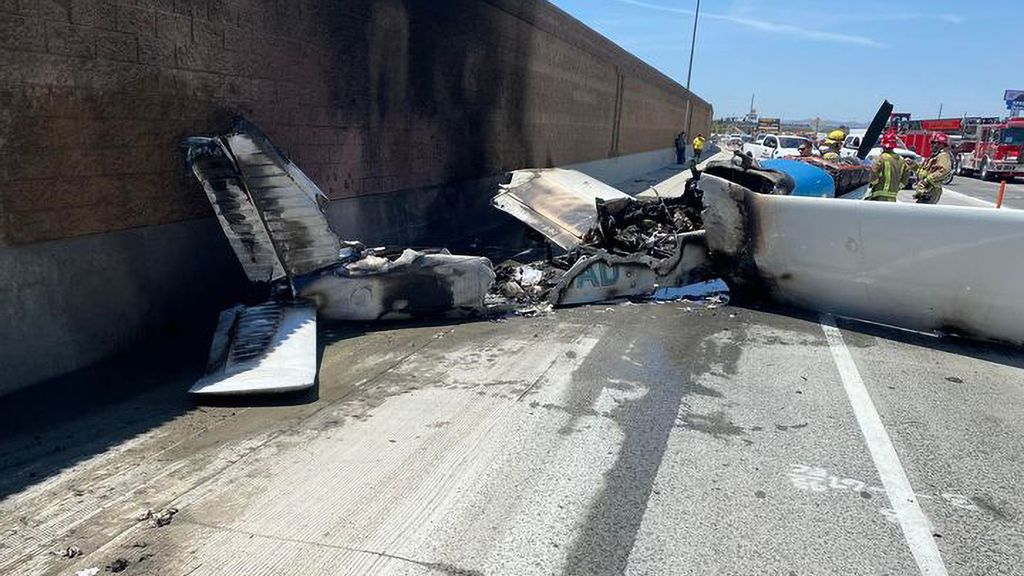 The aftermath of the plane crash that occurred on the 91 Eastbound in Corona, California, on Tue., Aug. 9, 2022. The two occupants were able to safely exit the plane. (Corona Fire Department/Zenger)

Graphic video shows the terrifying moment when firefighters tackle the burning wreckage of an aircraft after it clipped a truck as it crash-landed on a freeway.

Minutes earlier, the plane had collided with a pickup truck as it approached the roadway for its forced landing.

The Piper PA-32-300 made a forced landing on State Route 91 in Corona on August 9, said the Federal Aviation Administration and the California Highway Patrol.

Officials say the pilot of the single-engine plane bound for Corona Municipal Airport from Catalina Island had reported a mechanical fault.

The impact sparked a fire, which ripped through the six-seater aircraft, but its two occupants – a pilot and a passenger – managed to escape unhurt.

The 50-year-old plane had collided with a Toyota Tundra pickup truck as it approached the freeway.

Amazingly, officials said the truck suffered only minor damage and its driver was unharmed.

Firefighters from the Corona Fire Department arrived at the crash site within five minutes and extinguished the flames shortly before 1 p.m.

The plane’s occupants had already managed to free themselves from the wreckage by the time the firemen arrived.

Neither he nor his passenger needed medical assistance.

Reportedly, Cho and his passenger were returning from Catalina Island, which lies just 22 miles off the California coast, where they had enjoyed lunch.

Two eastbound lanes of the freeway were closed to traffic following the accident, bringing cars nearly to a standstill.

The plane was a total loss, and its wreckage was cleared by Tuesday night, August 9.

Zenger News obtained the footage from the Corona Fire Department, which said: “On-scene footage from Corona Engine 3 as they arrived on scene to the plane crash on the 91 Eastbound in Corona.”

The video was recorded through the windshield of a fire truck. It showed the burning airplane and thick smoke rising into the bright California sky. The video then shifts to a firefighter dousing the flames with water.

A photo posted by the fire department showed the aftermath of the incident: the airplane was burned and nearly consumed by the fire, leaving behind the engine compartment and tail.

Facebook user Sheena Steiner Escalante commented on the Facebook page for the Corona Fire Department: “We are lucky to have the best fire department. Thank you guys for all of your hard work!”

The 300-horsepower, fixed landing gear “Cherokee Six” Piper 32-300 was first certified for flight by the Federal Aviation Administration in 1967. It continued in production in several variants until 2007.

The versatile aircraft has been used for decades around the world for private transportation, air taxi services, bush support, and medevacs.