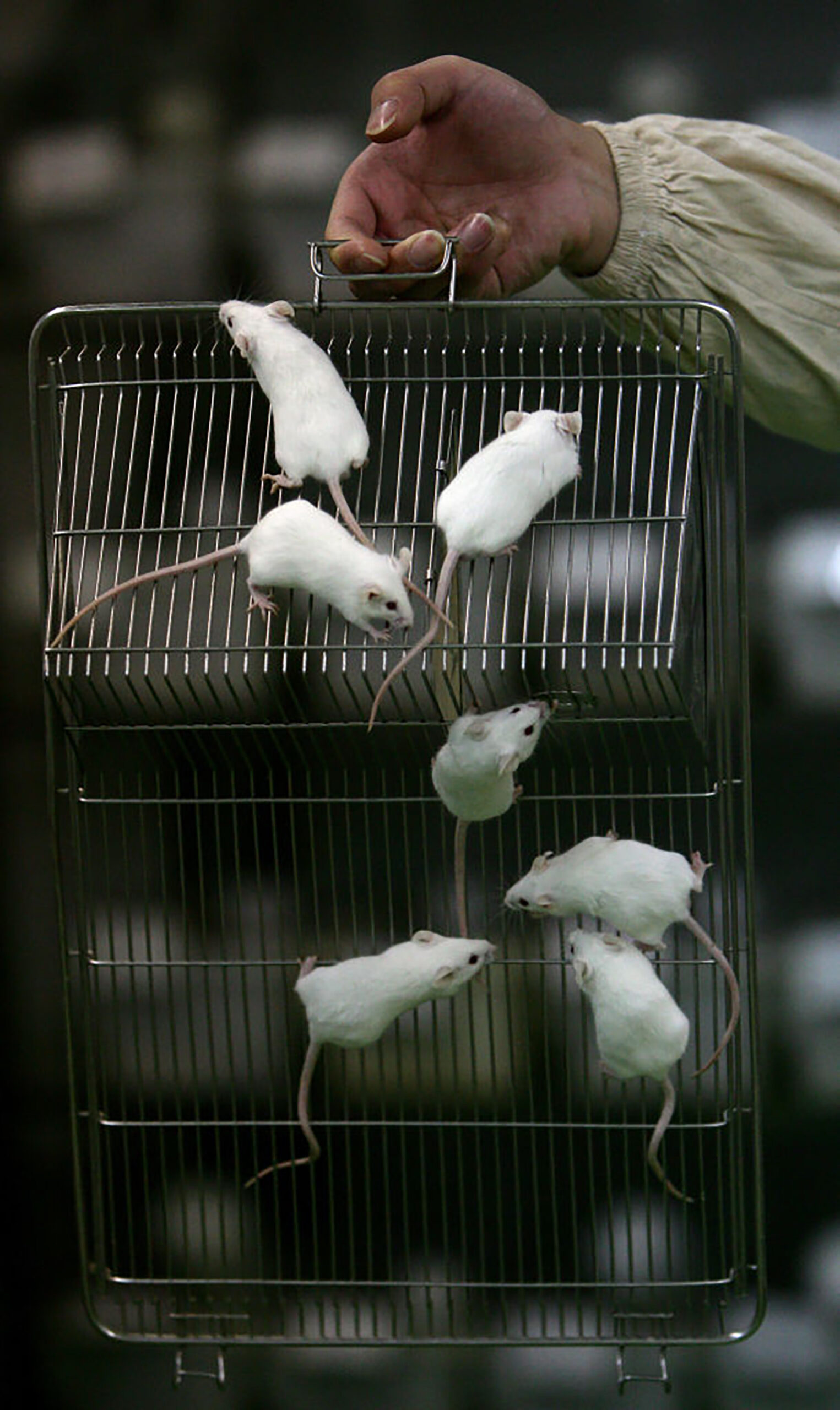 A worker displays white mice at an animal laboratory of a medical school on February 16, 2008 in Chongqing Municipality, China. (Photo by China Photos/Getty Images)

They hope the work could eventually lead to saving endangered species by taking their sperm cells and growing them inside other animals.

In previous research, scientists have used a technique called blastocyst complementation to create rat organs in mice and mutated mouse embryos that can’t produce specific organs by using pluripotent stem cells (PSCs), which can become any other cell in the body.

Senior author of the current study Dr. Ori Bar-Nur of ETH Zurich and colleagues wanted to discover whether it was possible to generate rat sperm inside mice that have a genetic mutation that makes them sterile.

He said: “Our study shows that we can use sterile animals as hosts for the generation of sperm cells from other animal species.

“Aside from a conceptual advancement, this notion can be utilized to produce endangered animal species gametes inside more prevalent animals.

“Other implications may involve an improved method to produce rat transgenic models for biomedical research.”

Publishing their work in the journal Stem Cell Reports, the authors created the mouse-rat chimeras by injecting rat PSCs into mouse embryos.

An essential gene for sperm production was mutated in the mouse blastocysts – a fertilized egg that rapidly produces cells.

The rat stem cells developed together with the mouse cells and created the chimeric animal composed of genes from both species.

Because the mice had a genetic mutation making them sterile, the rat cells were able to colonize the testes and create rat sperm, which could fertilize rat egg cells, although the embryos did not develop normally or lead to live offspring.

Dr. Bar-Nur said: “We were surprised by the relative simplicity by which we could mix the two species to produce viable mouse-rat chimeras.

“These animals, by and large, appeared healthy and developed normally, although they carried both mouse and rat cells in a chimeric animal.

“The second surprise was that indeed all the sperm cells inside the chimeras were of rat origin.

“As such, the mouse host environment, which was sterile due to a genetic mutation, was still able to support efficient sperm cell production from a different animal species.”

Researchers hope the work will speed up production of transgenic rats so they can used in studies of human diseases.

They are also aiming to produce live animals from mouse-rat chimeras and eventually hope to adapt the technique toward saving endangered animals.

Dr. Bar-Nur added: “We will need to improve the technique and demonstrate that rat sperm produced in mice can give rise to adult rats when fertilizing rat eggs.

“To the extent we can procure stem cells from an endangered rodent, which at some point in time may become extinct, we may be able to employ the same method to produce its germ cells via chimera production with mice.

“However, it is important to note that several scientific hurdles will need to be overcome to adapt this technique to other animal species.

“In addition, one still needs to showcase the production of female reproductive cells in female sterile mice, especially if we envision utilizing this technology for species conservation efforts.”