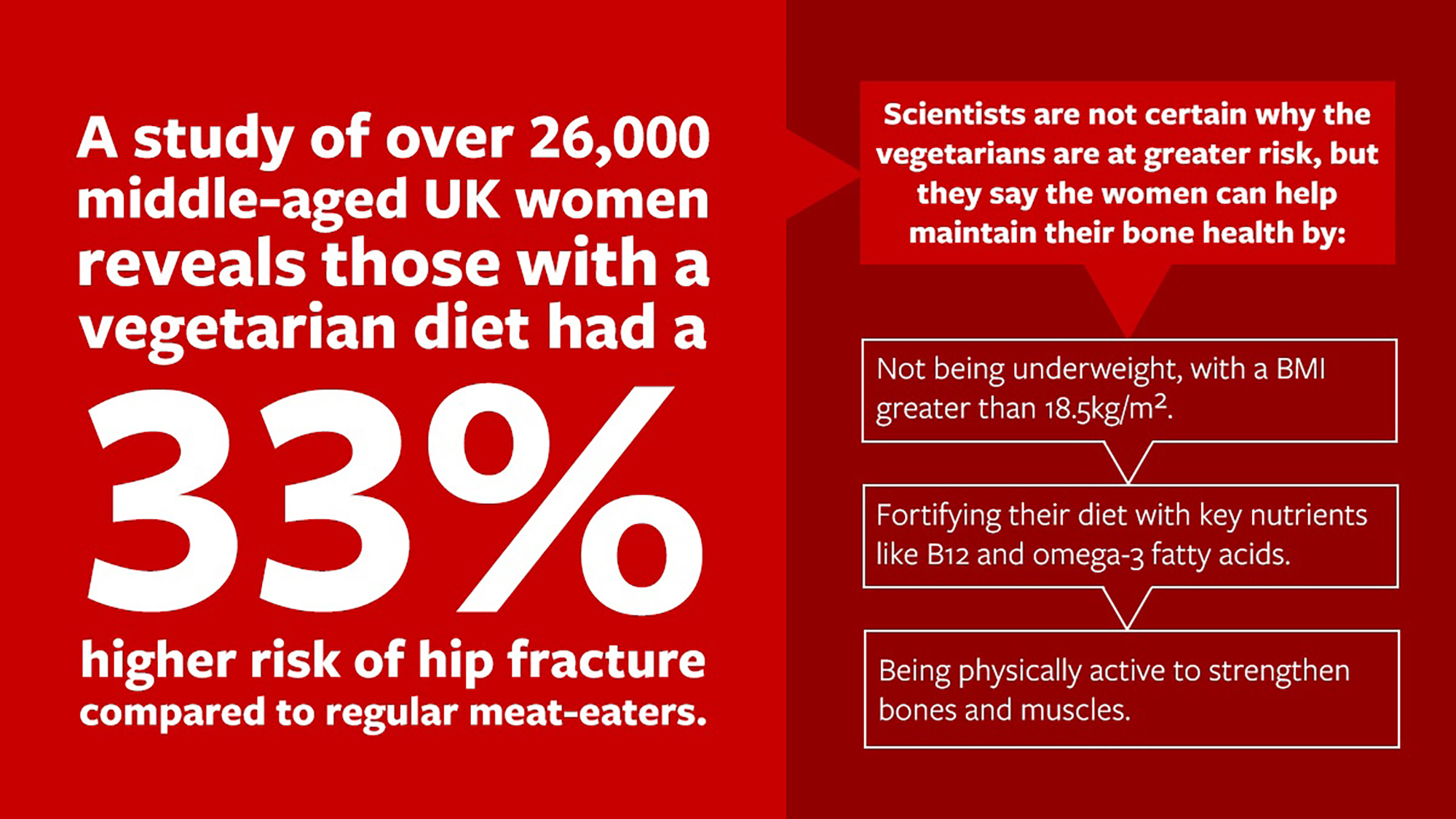 Using hospital records, the study found that vegetarians had a 33 percent higher risk compared to people who ate meat at least five times a week.

Scientists have said the study does not mean vegetarians should start eating meat again and stressed the need for more research into why they face a higher risk.

James Webster, doctoral researcher and lead author of the study, of the University of Leeds, said: “Our study highlights potential concerns regarding risk of hip fracture in women who have a vegetarian diet.

“However, it is not warning people to abandon vegetarian diets. As with any diet, it is important to understand personal circumstances and what nutrients are needed for a balanced, healthy lifestyle.

“Vegetarian diets can vary widely from person to person and can be healthy or unhealthy, just like diets that include animal products.

“However, it is concerning that vegetarian diets often have lower intakes of nutrients that are linked with bone and muscle health.

“These types of nutrients generally are more abundant in meat and other animal products than in plants, such as protein, calcium and other micronutrients.

“Low intake of these nutrients can lead to lower bone mineral density and muscle mass, which can make you more susceptible to hip fracture risk.

“This makes it especially important for further research to better understand factors driving the increased risk in vegetarians, whether it be particular nutrient deficiencies or weight management, so that we can help people to make healthy choices.”

Vegetarian diets have gained popularity in recent years, with a 2021 YouGov survey putting the size of the U.K. vegetarian population at roughly 5-7 percent.

It is often thought of as being healthier and previous studies have shown that a vegetarian diet can reduce the risks of several chronic diseases including diabetes, heart disease and cancer, compared to omnivorous diets.

There is also a growing clamor to reduce meat consumption globally in order to lower carbon emissions and prevent catastrophic climate change.

Understanding the health effects of a vegetarian diet is therefore becoming increasingly important to public health.

Publishing their results in the journal BMC Medicine, the research team investigated the risk of hip fracture in occasional meat-eaters, pescatarians (people who eat fish but not meat) and vegetarians, compared to regular meat-eaters (people who eat meat at least five times a week).

After adjusting for other factors like smoking and age, vegetarians were the only diet group with an elevated risk of hip fracture.

“Plant-based diets have been linked with poor bone health, but there has been a lack of evidence on the links to hip fracture risk.

“This study is an important step in understanding the potential risk plant-based diets could present over the long-term and what can be done to mitigate those risks.”

The research team also found that the average BMI (body mass index) among vegetarians was slightly lower than the average among regular meat-eaters.

Previous research has shown a link between low BMI and a high risk of hip fracture.

Lower BMI can mean people are underweight which can mean poorer bone and muscle health and a higher risk of hip fracture.

Dr. Darren Greenwood, study co-author, added: “This study is just part of the wider picture of diet and healthy bones and muscles in older age.

“Further research is needed to confirm whether there could be similar results in men, to explore the role of body weight, and to identify the reasons for different outcomes in vegetarians and meat-eaters.”

The team used data from the U.K. Women’s Cohort Study, which was set up by the University of Leeds to explore links between diet and chronic disease.

Dietary information was collected using a food frequency questionnaire and was validated using a four-day food diary in a subsample of women.

At the time they were recruited into the study, the women ranged in age from 35 to 69.