The phenomenon has been detected in meteorites that break off from asteroids and occasionally moons and planets.
By Simona Kitanovska August 12, 2022
Facebook
Twitter
Linkedin
Email 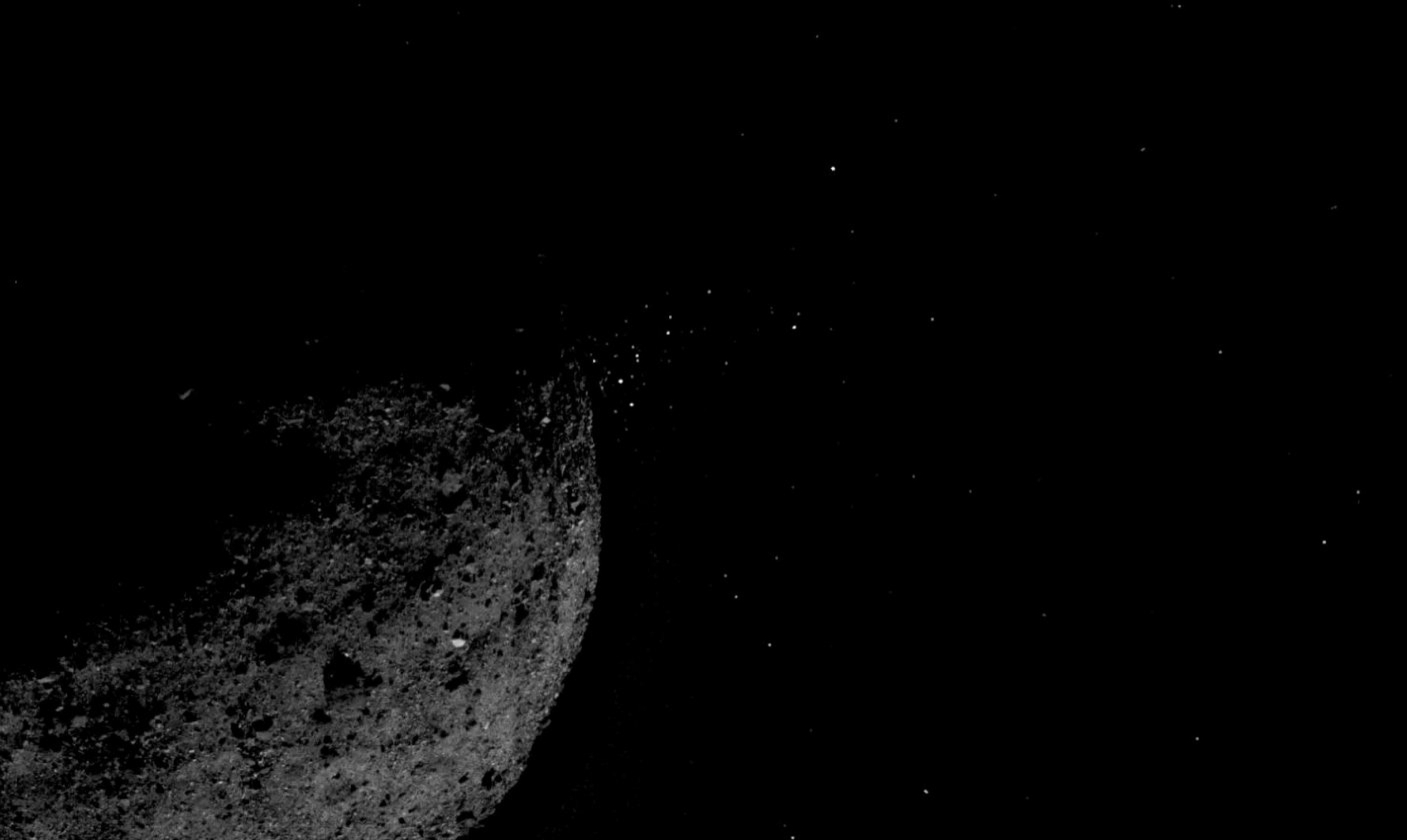 Pebbles ejected off the surface of asteroid Bennu were observed frequently by NASA’s OSIRIS-REx spacecraft. This observation inspired this study. (NASA/Goddard,University of Arizona,SWNS/Zenger News)

Meteorites ‘spit’ pebble-sized rocks into space, flicking fragments of themselves as they hurtle through the cosmos at 160,000 miles an hour.

This bizarre behavior was identified, according to a new study, in the Aguas Zarcas meteorite, which fell to Earth three years ago.

The carbonaceious meteorite is named for a town in Costa Rica where it fell in 2019. It is more than 4.5 billion years old, and features dust from the early Milky Way.

Philipp Heck of Meteoritics at Chicago’s Field Museum and the senior author of the study published in the journal Nature Astronomy said: “We would expect this in other meteorites. People just haven’t looked for it yet.”

In 2019, NASA’s OSIRIS-REx spacecraft sent back images of swarms of marble-sized rocks flying off the asteroid Bennu as it traveled through the solar system.

Now the phenomenon has been detected in meteorites that break off from asteroids and occasionally moons and planets.

Heck said: “It’s fascinating to see something that was just discovered by a space mission on an asteroid millions of miles away from Earth, and find a record from the same geological process in the museum’s meteorite collection.”

The cause is a mystery, but one theory holds that it is ice just under the surface of the meteorites that turns into gas and acts as a propellant.

The Aguas Zarcas meteorite was donated to the museum by private collectors Terry and Gail Boudreaux.

Heck and his student Xin Yang, a co-author of the study, were preparing it for another study when they noticed something strange.

Yang said: “We were trying to isolate very tiny minerals from the meteorite by freezing it with liquid nitrogen and thawing it with warm water, to break it up.

“That works for most meteorites, but this one was kind of weird – we found some compact fragments that wouldn’t break apart.”

Finding bits that won’t disintegrate sometimes happens. Scientists usually just shrug and break out the mortar and pestle to prepare samples for study.

Heck said: “Xin had a very open mind. He said, ‘I’m not going to crush these pebbles to sand, this is interesting.'”

Instead, the researchers devised a plan to figure out what they were – and why they were so strong.

Heck explained: “We did CT [computed tomography] scans to see how the pebbles compared to the other rocks making up the meteorite.

“What was striking is these components were all squished – normally, they’d be spherical – and they all had the same orientation. They were all deformed in the same direction, by one process.”

Something had happened to the pebbles that didn’t happen to the rest of the rock around them.

Yang said: “This was exciting, we were very curious about what it meant.”

By analyzing the OSIRIS-REx findings they put together a hypothesis – supported with physical models.

They showed the asteroid underwent a high-speed collision, and the area of impact got deformed.

That rock eventually broke apart due to the huge temperature differences the asteroid experiences when it rotates. The side facing the sun is more than 300 degrees Fahrenheit warmer.

Heck said: “This constant thermal cycling makes the rock brittle, and it breaks apart into gravel.”

These pebbles are then ejected from the asteroid’s surface, in a process that Heck said is still not understood.

They might be dislodged by smaller impacts other space collisions, or just get released by the thermal stress the asteroid undergoes, but once the pebbles are disturbed, “you don’t need much to eject something – the escape velocity is very low,” said Heck.

A recent study of the Bennu asteroid revealed its surface is loosely bound and behaves like ‘popcorn in a bucket.’

The pebbles then entered a very slow orbit around the asteroid and, eventually, fell back down to its surface further away where there was no deformation.

Then the asteroid underwent another collision, and the loose mixed pebbles on the surface got transformed into a solid rock.

Heck said: “It basically packed everything together, and this loose gravel became a cohesive rock.”

This collision may have dislodged new rock material and sent it into space. That chunk of the asteroid fell later as the Aguas Zarcas meteorite, carrying evidence of the pebble mixing.

This could explain the pebbles present in Aguas Zarcas, making the meteorite the first physical evidence of the geological process observed by the OSIRIS-REx spacecraft on Bennu.

Yang said: “It provides a new way of explaining the way that minerals on the surfaces of asteroids get mixed.”

It has long been assumed that the main way the minerals on the surfaces of asteroids are rearranged is through infrequent, big crashes. “From OSIRIS-REx we know these particle ejection events are much more frequent than these high-velocity impacts, so they probably play a more important role in determining the makeup of asteroids and meteorites,” said Heck.