Two cats living nearby - Luna and Bailey - later had to be put down after becoming sick.
By Simona Kitanovska August 12, 2022
Facebook
Twitter
Linkedin
Email 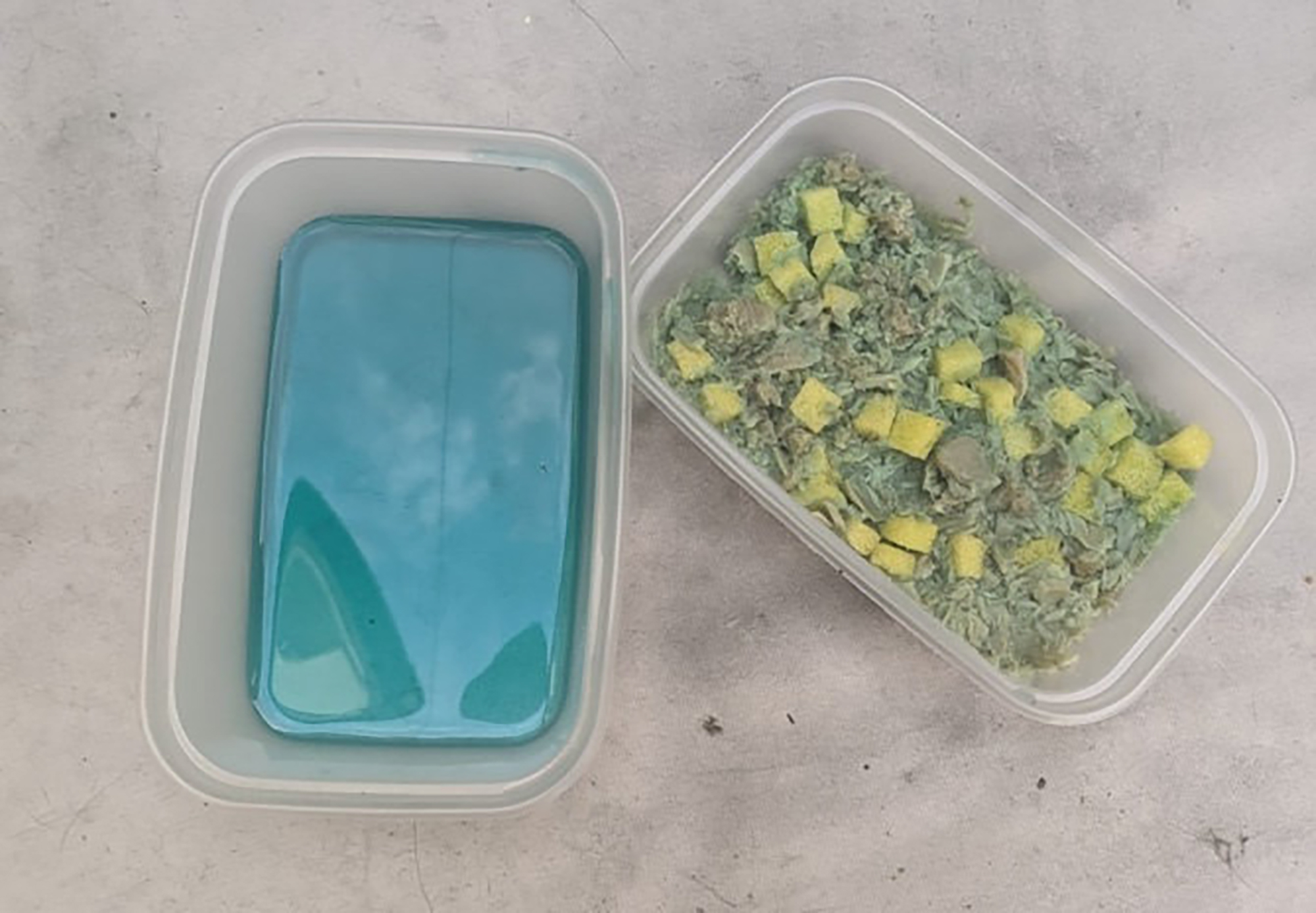 Tub containing the poison in an undated photo. Tristian Paul Pearson left out the poison-filled tubs with the intention of poisoning his neighbors' cats and was sentenced for his crime at Cardiff Crown Court on August 5.(RSPCA,SWNS.COM/Zenger)

A man has admitted feeding poisoned tuna to his neighbors’ cats which both had to be put to sleep – in the first case of its kind referred to a crown court.

The substance is highly poisonous to felines and is contrary to the Animal Welfare Act 2006.

Two cats living nearby – Luna and Bailey – later had to be put down after becoming sick.

Pearson, of Bargoed, Wales, pleaded guilty to an Animal Welfare Act offense and was handed an eight-month suspended prison sentence.

The RSPCA say it’s the first such case to be referred in this way, following the coming into force of the Animal Welfare (Sentencing) Act 2021 last year demonstrating the seriousness of the offense.

The poisonings took place in early September 2021 and the kidney tubules of both cats were consistent with ethylene glycol poisoning.

The cats belonged to a father and daughter who lived in two separate properties near Pearson’s home.

Three young children – aged eight, five and 18 months – lived at the same property as one of the cats.

Bailey’s owner reported that his cat became unwell and appeared weak and wobbly.

An appointment was made for Bailey, a male Persian cat, to see the vets, but he sadly died before that even took place.

Days later Luna, a female domestic shorthair, returned home – to a property backing onto the house where Bailey lived – appearing very wobbly on her back legs.

Her symptoms escalated, and vets found her to also have a high heart rate while her muscles were twitching.

Vet tests confirmed Luna had kidney failure and she was put to sleep on humane grounds.

Following the deaths of the two pets the cat’s owners looked in the rear garden of their neighbor’s property – and spotted two pots.

One contained a bright blue liquid, and the other pot contained a food mix, including meat. These were retrieved, and passed to the RSPCA.

Some of the meat-type substance found in one of the pots was also found in the garden of Luna’s owner.

Tests later confirmed substances found in the pots contained a high concentration of ethylene glycol, one of which appeared to have been mixed with tuna fish – a food attractive to cats.

An expert veterinary witness report concluded that it is “very highly likely that this was the source of ethylene glycol that caused the death of” Luna and Bailey.

The vet statement added that the “effects of ethylene glycol poisoning cause a cat to suffer via the mechanism of dehydration with subsequent headaches, nausea, disorientation, weakness and collapse”.

Pearson was sentenced at Cardiff Crown Court on August 5.

In addition to an eight-month prison sentence, suspended for 18 months, he was ordered to do 150 hours of unpaid work, and disqualified from keeping all animals for a period of five years – a ban which he may not contest for at least four years.

Speaking after the hearing, RSPCA inspector Simon Evans, who investigated, said: “These poor cats were deliberately tempted into digesting a substance that is incredibly dangerous for cats and ultimately proved fatal to them both.

“One cat died before he could even be taken to the vets, while another had to be put to sleep to prevent suffering. Vets found clear evidence of the harm the ethylene glycol had done.

“The two dishes found in the defendant’s garden contained a high concentration of the dangerous substance – and he admitted in court that he caused them to consume it, causing them to suffer unnecessarily.

“We hope this shocking, landmark case sends a clear message to anyone thinking of targeting cats in this way – this is wrong, illegal and will not be tolerated.”

The case had originally been heard at Cwmbran Magistrates Court, where Pearson pleaded guilty – but was referred to Cardiff Crown Court for sentencing.

The RSPCA believes this is the first such case to be referred in this way, following the coming into force of the Animal Welfare (Sentencing) Act 2021 last year; demonstrating the seriousness of the offense.

Previously, the maximum sentence a magistrate could hand down for animal welfare offenses was six months in prison – however this was increased ten-fold to five years for certain Animal Welfare Act offenses, and, under new guidelines, meant such animal cruelty crimes can now be heard in both magistrates’ courts and the Crown Court to reflect the new maximum penalty.

Hayley Firman of the RSPCA’s prosecutions department commented: “It’s good to see that the courts are applying the new legislation in a way it was intended”.

RSPCA Cymru continues to remind cat owners of the symptoms of poisoning – and to know what to do if they fear their cat has been targeted.

Inspector Evans added: “This case reminds us that pet poisonings do happen. Some of the symptoms these poor cats showed are typical of being poisoned.

“Vomiting, a depressed or sleepy demeanor, appearing drunk or uncoordinated, seizures, and breathing difficulties could all be symptoms of a cat being poisoned.

“Anyone fearing their cat may have been poisoned should try and remain calm, move the cat away from the source and contact a vet straight away.

“Potentially hazardous substances – like antifreeze – should also be used and stored responsibly, and safely away from curious felines.”

The full offense was as follows:

That between September 1 2021 and September 9, 2021, in the vicinity of &mldr; West Street, Bargoed, Caerphilly, you did cause unnecessary suffering to protected animals, namely two cats identified as Luna and Bailey, by doing an act or acts, namely causing said animals to take ethylene glycol and that you knew or ought reasonably to have known that this act or acts would have the effect of causing unnecessary suffering or be likely to do so, contrary to Section 4 (1) of the Animal Welfare Act 2006.