A prototype composed of a robot arm and a levitator was used to test different fabrication processes.
By Simona Kitanovska August 12, 2022
Facebook
Twitter
Linkedin
Email 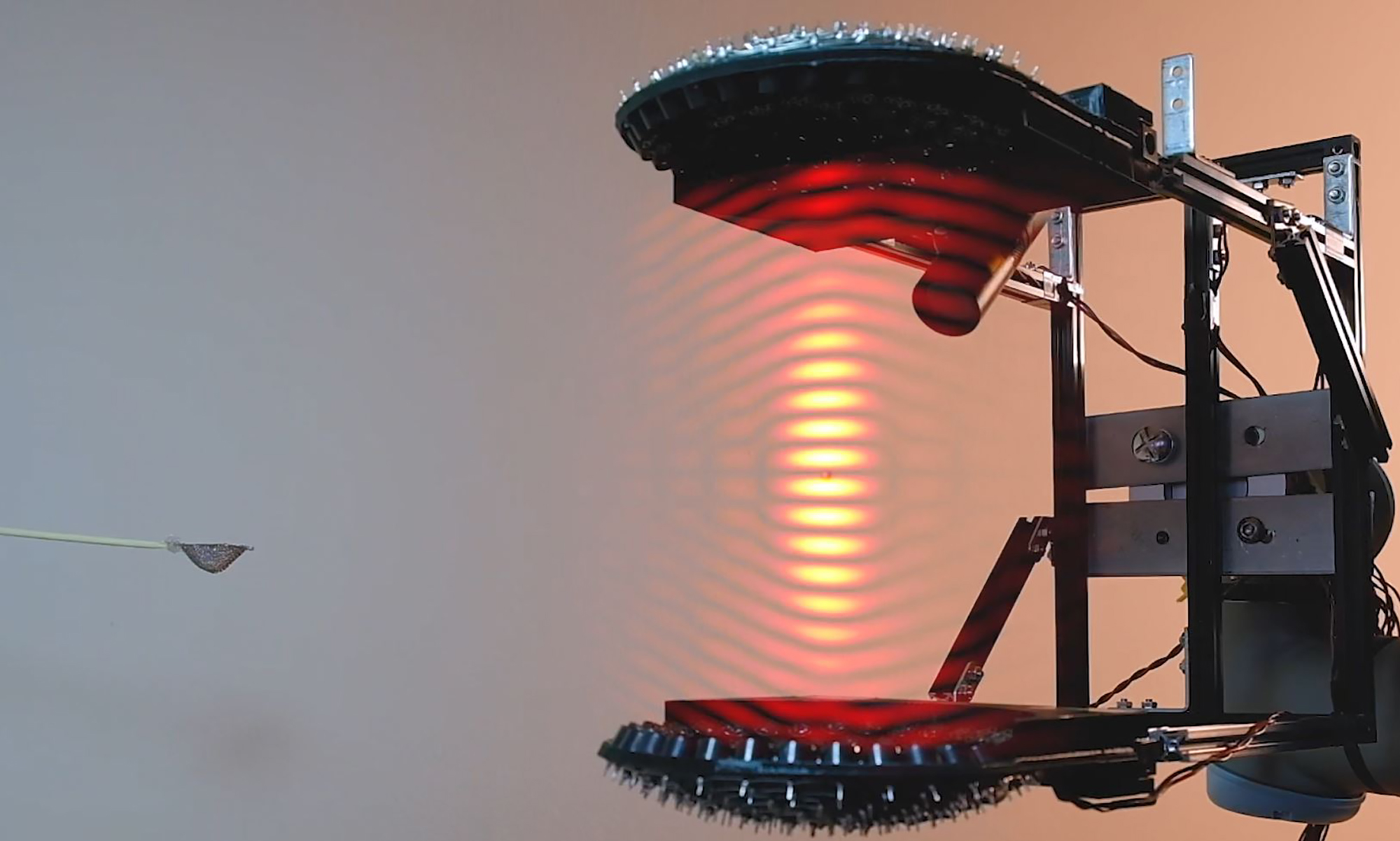 An illustrated depiction of the sound waves LeviPrint uses to levitate and manipulate objects. (UPNA,SWNS/Zenger)

An astounding technological innovation could revolutionize construction by assembling objects by levitation, without touching them.

A prototype composed of a robot arm and a levitator was used to test different fabrication processes.

The result sees items – including liquids such as glue – held by high-frequency sound waves and floating through the air to form structures.

Researchers from Spain’s Universidad Publica de Navarra demonstrated LeviPrint building a variety of constructions, including a bridge made of sticks, a circular liquid glue shape, a matchstick cube, and even a cat’s ears arranged on an orange.

The research was presented at Vancouver’s SIGGRAPH conference this week, where companies such as Nvidia, Disney Research, and Facebook Reality Labs present their work.

Unlike regular assembly and manufacturing techniques, in which parts are in direct contact with the machine, acoustic manipulation is used to position and orient parts without touching them during the assembly process.

Aside from construction, applications might include the realm of biomedical work, to eliminate cross-contamination or small-scale manufacturing in delicate items such as smartphones or watches.

One test also showed a stick passing through a hole in mesh to illustrate how the system can construct in enclosed spaces.

“We generate acoustic fields that trap small particles, glue droplets and, most importantly, elongated stick-like elements that can be manipulated and reoriented as we levitate them,” a statement from the Spanish university explained.

“In short, it is a fully functional system for manufacturing 3D structures using contactless manipulation. We hope that this technique inspires novel fabrication techniques and that reaches fields such as microfabrication of electromechanical components or even in-vivo additive manufacturing,” the university stated.

Lead researcher Asier Marzo said: “We have designed a levitator combined with a robotic arm and a liquid dispenser to manufacture complex objects without contact.”

Co-author Iñigo Ezcurdia said: “We can manipulate small, brittle parts, as well as liquids or powders, thus making the processes more versatile. There is less cross-contamination, as the manipulator does not touch the material.

“Furthermore, it enables manufacturing techniques that cannot be achieved using traditional 3D printing, such as adding elements on top of existing parts or manufacturing inside closed containers from the outside.”