The haul of 103 movies are all movies Ryan and Blake have starred in, including Deadpool 2 and The Age Of Adaline.
By Simona Kitanovska August 12, 2022
Facebook
Twitter
Linkedin
Email 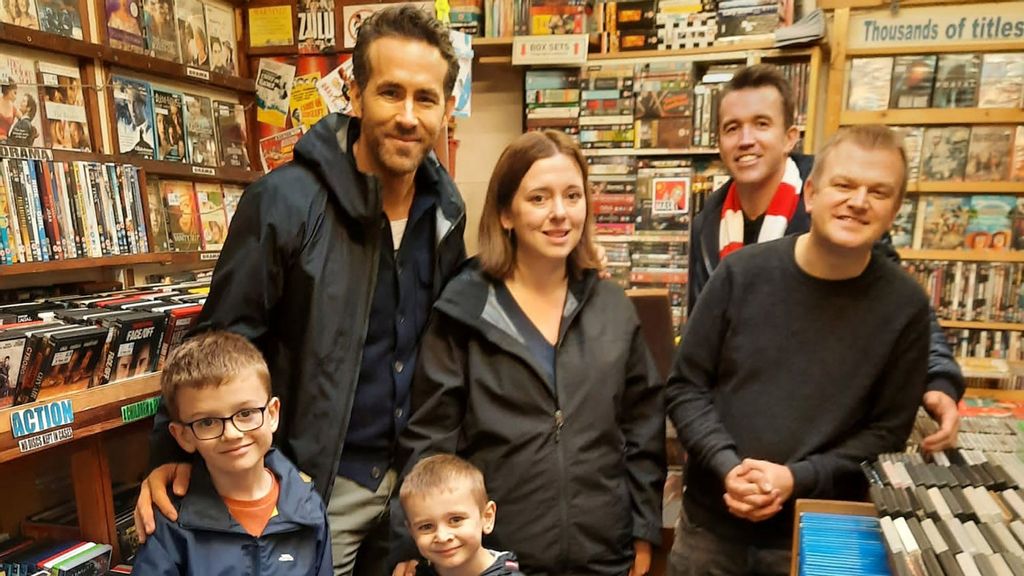 Wrexham co-owners Rob and Carrie Clarke, Ryan Reynolds and Rob McElhenney in Mad4Movies while the stars were filming a documentary in Wrexham, Wales in October, 2021. (Rob Clarke,SWNS/Zenger)

Hollywood star Ryan Reynolds surprised a DVD shop owner and lifelong fan with 100 signed copies of his own movies.

Movie nut Rob Clarke, 45, who runs Mad4Movies, in Wrexham, Wales, in the United Kingdom, couldn’t believe it when he got a message from the Deadpool actor on Twitter.

Dad-of-two Clarke met Wrexham co-owner Ryan last year while he was in town filming the ‘Welcome to Wrexham’ documentary, set to air on Disney+ this month.

Clarke said him and wife Blake Lively had been clearing out their office when they found the haul of old movies, and thought Rob might like them for his shop.

Clarke thought the message was a hoax at first until his wife Carrie, 38, told him it was real.

The haul of 103 movies are all movies Ryan and Blake have starred in, including Deadpool 2, The Age Of Adaline, The Rhythm Section and The Voice.

Clarke said he has no idea what the films are worth but plans to sell them for charity – and said he has earmarked some he will keep for himself.

Clarke, who has been a Wrexham fan since the 1980s, said: “I got a notification on Twitter saying Ryan Reynolds has followed you back and then I saw I had a message from him.

“I didn’t think it was real at first until I showed my wife – I thought someone might be having me on.

“He said him and Blake were having a clear out of their office and had found all these DVDs and thought of me.

“They are mostly Blue Rays so he said they might not play in the UK but thought they would be cool to have in my shop.

“He said him and Blake had signed all of them, there was about 103 in total.”

Clarke is raffling off the DVDs to raise money for a charity which supports people with the rare blood disorder ITP, which his son Charlie, aged eight, was diagnosed with.

He is selling tickets locally for 5 British pounds ($6) with the draw set to be made on August 24.

First prize will include five films signed by Ryan and Blake – including Deadpool 2, The Age Of Adaline, and The Rhythm Section.

He said: “I asked Ryan if it would be okay to sell them for charity and told him about my son.

“He said he was really sorry to hear about Charlie and thought it was a great idea to try and raise some money.

“It doesn’t surprise me that he gave them to me, he is a really nice guy.

“I have always thought he is a likeable actor, he’s funny and not scared to take the mick out of himself.

“Him and Blake are both down to earth, I feel like I can talk to Ryan like any other customer.

“I am going to keep a few of the DVDs, I have earmarked about 20 I’d like, but the rest I am going to raffle for charity.

“I have been inundated with messages from people who want to buy them but I don’t really know what they are worth.

“I am going to do a raffle locally first and then do a few others for a wider audience.

“I have been a Wrexham fan since the 1980s and we never have much to cheer about so there was a buzz when he bought the club.

“And it’s been a whirlwind since.

“Him and Rob McElhenney visited the shop last October as part of the documentary they are making for Disney.

“He was a great guy and we had a good laugh, we spoke about footy and films.”

Clarke is fundraising for the ITP Support Association.