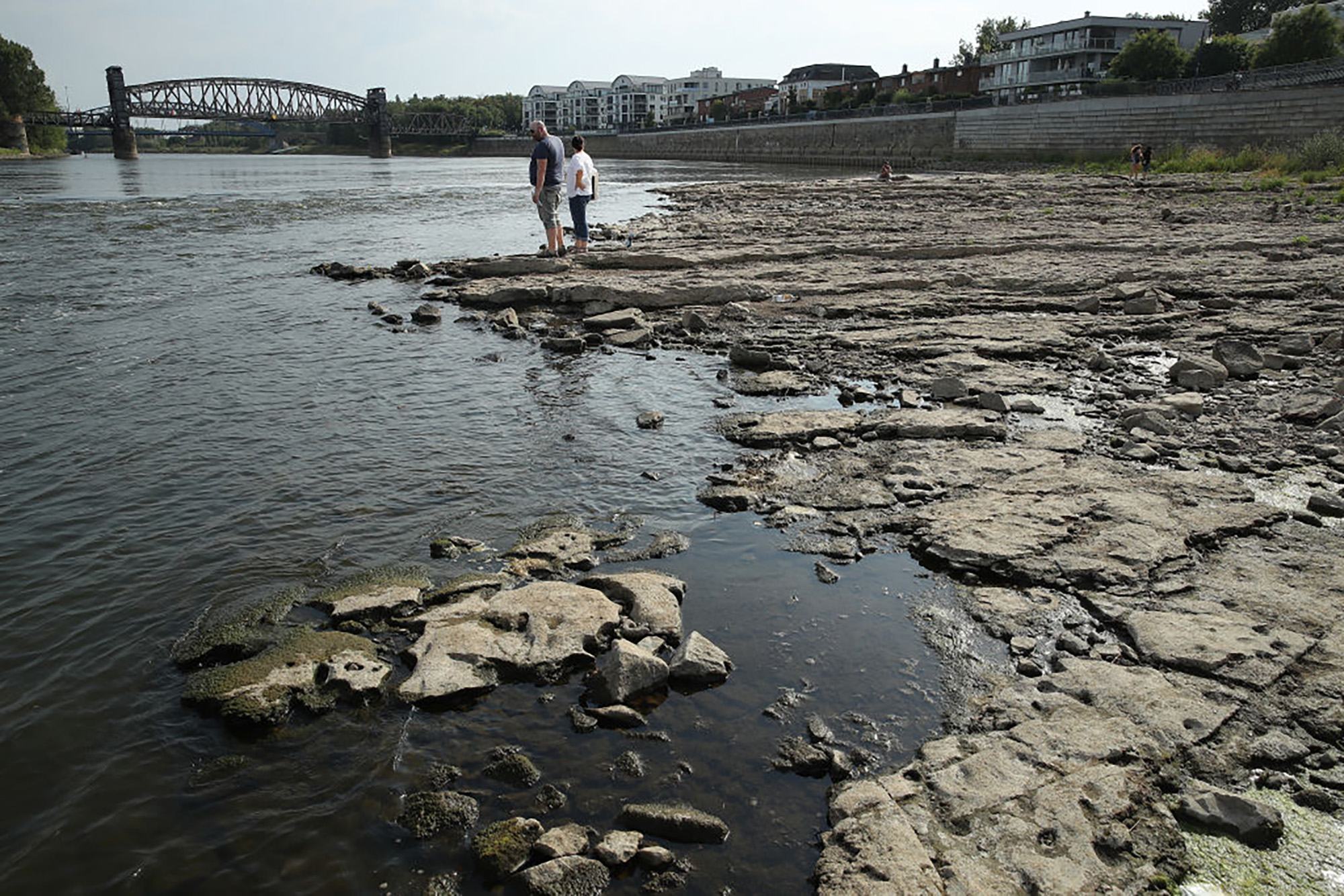 People walk on an exposed and dried out portion of the Elbe River bed that under normal conditions would be submerged under water during hot weather on August 8, 2018 in Magdeburg, Germany. (Photo by Sean Gallup/Getty Images)

Alarm bells rang after stones emerged on the beds of the Rhine and Elbe Rivers in July and August, 2022.

Hunger stones (Hungersteine) have been used for centuries to signify historic droughts and alert people of their consequences.

Their name comes from centuries of droughts followed by starvation from failed crops.

One spooky example is found in the Elbe River in Decin, Czech Republic.

Reportedly, it comes with a chilling inscription dating back to 1616, warning: “If you see me, weep. (Wenn du mich siehst, dann weine)”

The rock commemorates numerous droughts going as far back as 1417.

Already low water levels on the Rhine River have continued to drop due to rising high temperatures and lack of rainfall in the region.

Shipyard operators fear that if water levels continue to fall rapidly, they will have to reduce ferry loads.

They however reported they are closely monitoring the water levels and their potential impact on the operations.

Managing director of the Rhein ferry Linz-Kripp GmbH service, Udo Scholl expressed his fears over the emergence of hunger stones.

He said: “The rock has probably been visible for about a month now.”

Scholl stated that current water levels are getting close to the 2018 extremes.

Water level has significantly decreased at a narrow part of the town of Kaub near the city of Koblenz.

According to reports, it currently stays at roughly 56 centimeters (less than 2 feet) in depth.

As ships need about 1.5 meters to be able to sail fully loaded, DTG shipping cooperative director Roberto Spranzi said: “We continue to sail, but can only load about 25 to 35 percent of the ship’s capacity.”

The Rhine River begins in the Czech Republic and runs through Germany, and is the second largest river in central and western Europe after the Danube.

If the level continues to drop, experts anticipate historic low levels to break the all-time record from 2018.

The economic specialist at the Kiel Institute for the World Economy (IfW), Nils Jannsen, said: “In 2018, when navigation on the Rhine was last hampered by low water for an extended period, industrial production decreased by about 1.5 percent at its peak.

“It could be an additional burden that shipping is a relatively important means of transporting energy commodities.”

Current low water levels are occurring earlier than usual, as lowest points are mostly noticed later in the year, normally between September and October.