The following day, the president held a press conference where videos of the well’s interior were presented to the press.
By Alice Amelia Thomas August 12, 2022
Facebook
Twitter
Linkedin
Email 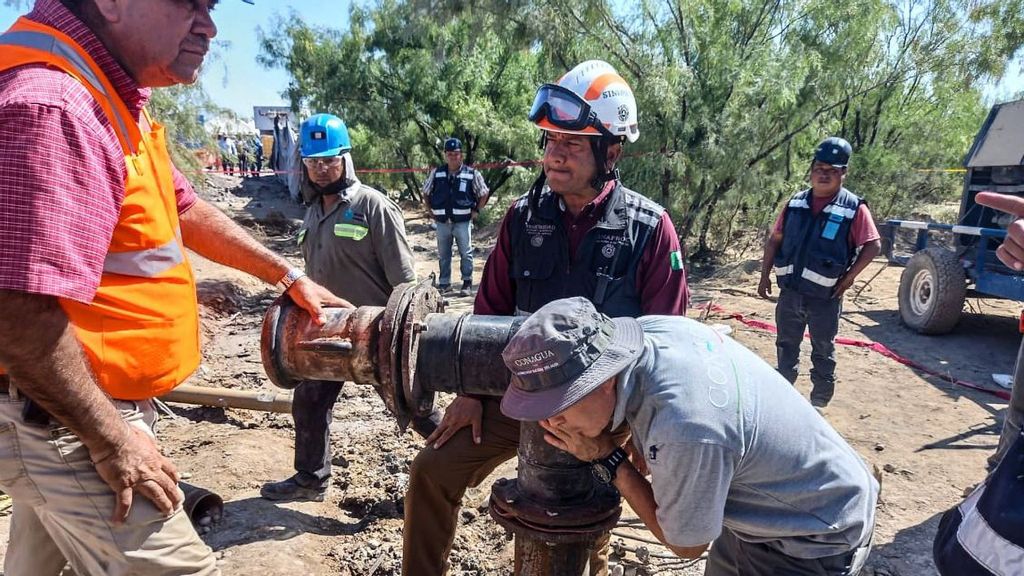 Picture shows rescue crews working to reduce the water level in the mine, undated. The mine has 10 miners trapped inside in Sabinas, Mexico. (@CNPC_MX/Zenger)

This is a rescue worker’s dark descent into a 200-foot deep well where ten miners have been trapped for a week after a tunnel collapse.

According to National Civil Protection Coordinator Laura Velazquez, 600 emergency service employees have worked for 134 hours straight after receiving news of ten miners who remain trapped in a well in the El Pinabete mine in the city of Sabinas in the Mexican state of Coahuila.

After visiting the site on Sunday, August 7, Mexico’s President, Andres Manuel Lopez Obrador stated: “We have to do everything we are doing, and more.”

However, on August 8, 2022, the civil protection coordinator made a statement revealing that the conditions of the well currently make it impossible for the search and rescue operation for the trapped miners to continue.

The following day, the president held a press conference where videos of the well’s interior were presented to the press.

He then explained that technical teams from the Secretariat of the Navy (SEMAR) along with the Immediate Emergency Response Team (ERIE) from the Ministry of Defense (SEDENA) combined efforts to lower a worker along with a drone into a 3-foot-wide well where the rescue operation was expected to continue.

Footage from the drone camera reveals that solid objects and turbulent waters are currently blocking the rescue team’s access to the mine and are creating low visibility conditions.

Further attempts to access the miners through other openings in the structure also failed after it was found that a well that had been created for an underwater survey was obstructed by a pile of wood while another possible access point would not allow any team members or equipment through.

According to the President, the rescue operation is expected to resume on Thursday, August 11, 2022, when SEDENA divers will attempt to reach the trapped miners with oxygen tanks after water levels are expected to drop.

The rescue team plans to introduce a pump and drill into five more wells in the mine to expand the volume of the pumping.

Two pumps are currently in action while three are in the process of being opened.

Miguel Angel Riquelme, the governor of Coahuila said that the water was being pumped from the flooded wells at 350 liters (92 gallons) a second and that levels were going down.

He added that he hoped that the miners had managed to retreat further back into the mine where they might have found an air bubble.