Footage of 15 individuals showed the call was produced by at least five females and a male housed at four different facilities.
By Simona Kitanovska August 11, 2022
Facebook
Twitter
Linkedin
Email 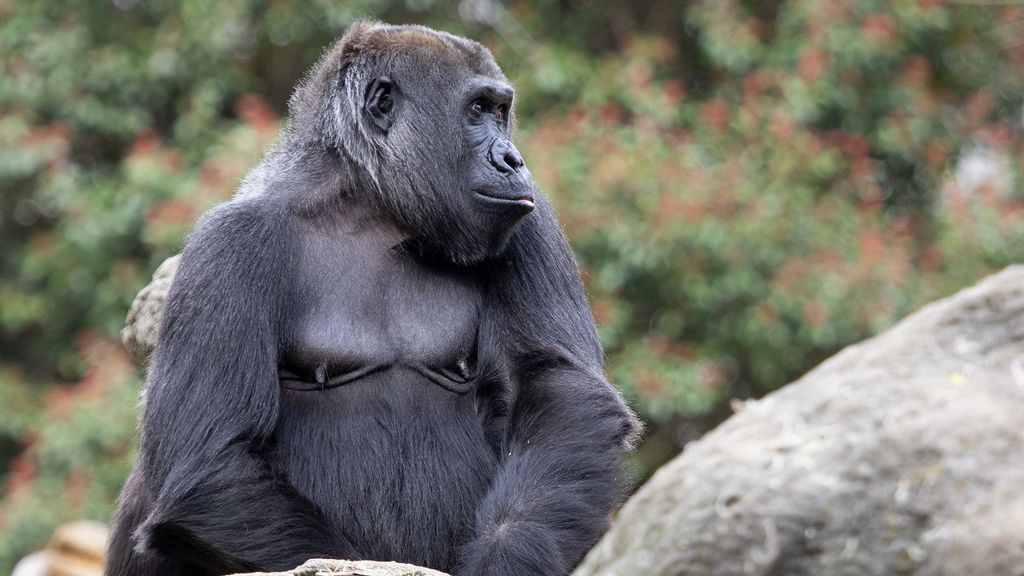 Sukari the gorilla at Zoo Atlanta, in an undated photo. A new research has found that zoo gorillas have developed their own call to get food from keepers, dubbed by scientists as the 'snough'. (Zoo Atlanta,SWNS/Zenger).

Zoo gorillas have developed their own call to get food from keepers, according to new research.

It has been dubbed by scientists as the ‘snough’ – because it sounds somewhere between a sneeze and a cough.

Great apes use it to attract familiar faces. It is the first time “complex vocal learning” has been identified in other primates.

The new study had been published in the journal PLoS ONE.

Lead author Professor Roberta Salmi, of the University of Georgia, said: “Indeed, evidence for the ability to produce novel calls through the imitation of sounds is rare in the animal kingdom.”

Outside humans it has only been found in songbirds, parrots, hummingbirds, whales, dolphins, porpoises, pinnipeds – and recently in elephants.

Prof. Salmi said: “Captive gorilla attention-getting calls resemble a sound between a sneeze and a cough that we named ‘snough’ or AG (attention getter).”

In experiments at Zoo Atlanta they were mostly single noises but in a few cases were part of a longer series of two to four spaced about a second apart.

Each individual one lasted about a fifth of a second. Those of Macy and her mother Kudzoo were shorter than two other adult females’.

The calls were often accompanied by an exaggerated mouth opening and a gentle but fast repeated slapping or covering of the head or face.

An analysis confirmed they differed acoustically from common gorilla calls such as grunts and demands for food in the wild.

What is more, a survey of recordings from other zoos revealed the phenomenon is not unique to Zoo Atlanta.

Prof. Salmi said: “We found gorillas at Zoo Atlanta produced vocalizations and gestures significantly more often when human and food were present together than when either stimulus was presented alone.

“This was also true for a novel vocalization not previously described in the species repertoire and produced mostly during the keeper-food condition, which we named the attention-getting sound (AG) or ‘snough’.

“We then showed the AG call was acoustically distinct from other gorilla calls produced in the same context – the food call or hum and the single grunt.

“Moreover, the results of the zookeeper survey suggest the AG call is not idiosyncratic to the Zoo Atlanta gorillas, as respondents attributed its use to as many as 33 gorillas housed at eleven different zoos across the U.S. and Canada.”

Video footage of 15 of the individuals showed the call was produced by at least five females and a male housed at four different facilities.

Prof. Salmi said: “These results demonstrate gorillas can modify their calls to produce a novel sound and furthermore confirm they can produce their calls and gestures intentionally to modify the attention status of their caregivers.”

Western gorillas at Zoo Atlanta use diverse signals to attract human attention, including vocalization, auditory and non-auditory gestures, with soft vocalizations of low frequency, banging or hand clapping, and shaking or waving a body part being some of the most common signals.

The ‘snough’ has not previously been described in the repertoire of wild gorillas, said Prof. Salmi.

She added: “Indeed, our study results indicate it is used specifically to attract
the attention of humans, suggesting that gorillas, as other apes, are able to produce novel sounds when encountering novel contexts.”

Chimpanzees are our closest relatives, sharing 99 percent of our DNA. Gorillas come a close second with 98 percent.

Gorillas are considered highly intelligent. A few individuals in captivity, such as Koko, have been taught a subset of sign language.

Like the other great apes, gorillas can laugh, grieve, have rich emotional lives, develop strong family bonds, make and use tools and think about the past and future.

Further work should be done to better determine the extent and patterns of transmission and potential independent innovation of the ‘snough’ across captive populations, said prof. Salmi.

She added: “These findings represent one of the few pieces of evidence of spontaneous novel vocal production in non-enculturated individuals of this species, supporting the inclusion of great apes as moderate vocal learners and perhaps demonstrating an evolutionary function to a flexible vocal repertoire.”