The footage was obtained from the 53rd Mechanized Brigade of the Armed Forces of Ukraine on Tuesday, August 9.
By Joseph Golder August 11, 2022
Facebook
Twitter
Linkedin
Email 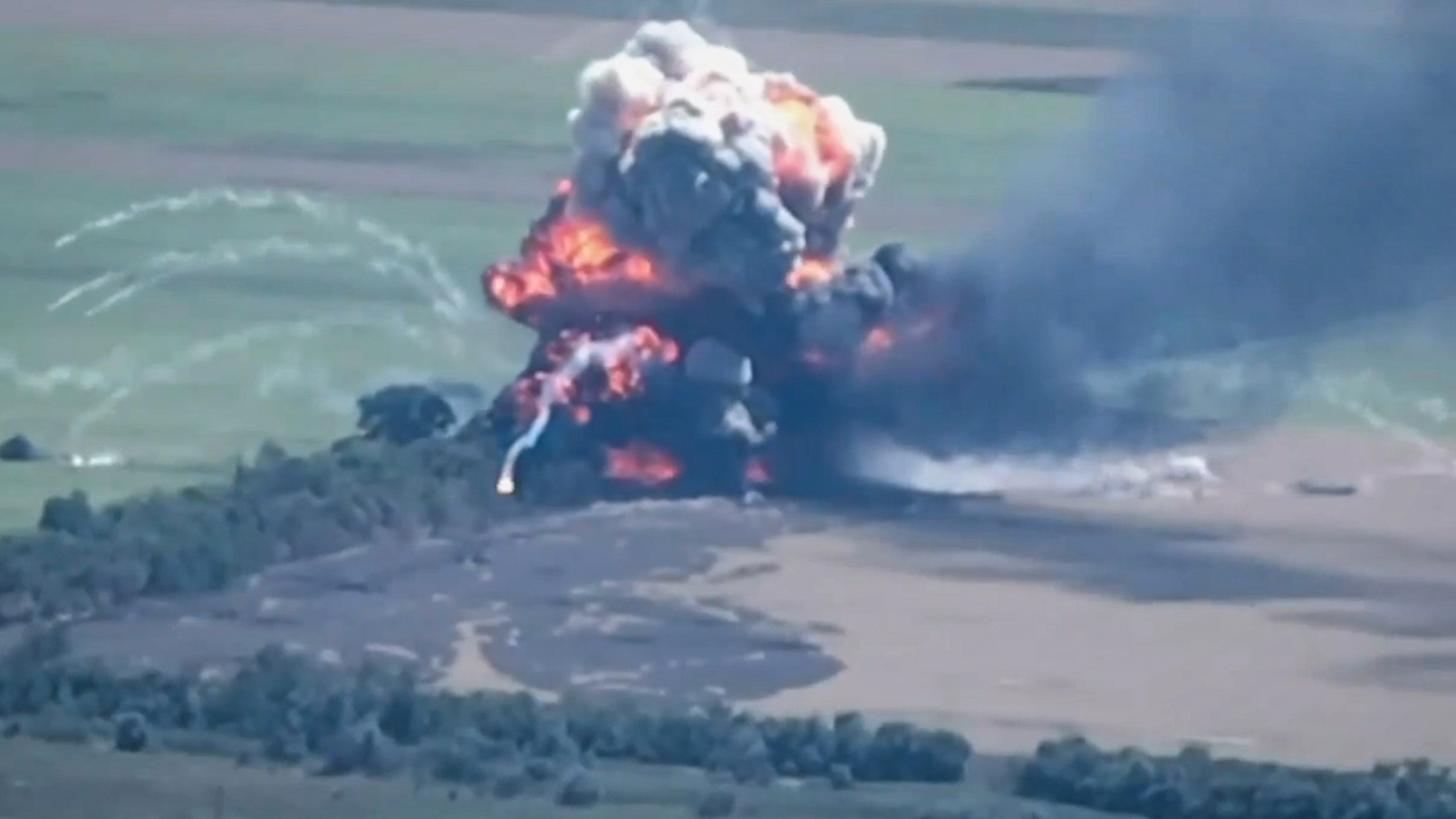 Picture shows a huge explosion and smoke on an open field in Ukraine in undated footage. According the General Staff of the Armed Forces of Ukraine a Russian BTR-82 and field warehouse were destroyed by the 53rd separate mechanized brigade. (@53brigade/Zenger)

This footage reportedly shows Ukrainian soldiers blowing up a Russian armored personnel carrier and its crew.

Zenger News reached out to the Ukrainian Armed Forces for comment and the head of the public relations service for the Ground Forces Command of the Armed Forces of Ukraine, Major Fityo Volodymyr, confirmed that the footage was authentic and was “from the brigade’s drone”.

Zenger News contacted the Russian Ministry of Defense for comment, but had not received a reply at the time of writing.

The video shows a large explosion as debris from the armored personnel carrier goes flying in every direction on the front lines.

The footage was obtained from the 53rd Mechanized Brigade – also known as the 53rd Separate Mechanized Brigade named after Prince Volodymyr Monomakh – of the Armed Forces of Ukraine on Tuesday, August 9, along with a statement saying (in English): “Minus one BTR-82 with a crew, plus 10 ‘Ladas’.

“Soldiers of a separate mechanized brigade named after Prince Volodymyr Monomakh continue to destroy the Russian invaders and their equipment successfully.

“We continue to carry out combat missions and destroy the enemies of Ukraine.

The BTR-82 is a wheeled armored personnel carrier that is used by the armies of Russia and Kazakhstan.

Russia invaded Ukraine on February 24 in what the Kremlin is still calling a “special military operation”. Wednesday marks the 168th day of the war.

Russia has claimed that its casualties have been much lower, but provides infrequent updates on its latest figures. The Pentagon said on Monday that Russia has suffered between 70,000 and 80,000 casualties – deaths and injuries – since the beginning of its invasion.

Several large explosions have taken place at a large Russian air base in Crimea, far from the front lines. It is currently unclear if the air base was targeted by Ukrainian weaponry. Russia annexed Crimea from Ukraine in 2014.

Ukraine’s President, Volodymyr Zelensky, has vowed to liberate Crimea. He said: “This Russian war against Ukraine and against the entire free Europe began with Crimea and must end with Crimea – with its liberation.”

But an adviser to President Zelensky, Mikhail Podolyak, has said that Ukraine is not taking responsibility for the explosions.

Petro Kotin, the head of Energoatom, Ukraine’s state nuclear power firm, has warned of “very high” risks associated with shelling at the Zaporizhzhia nuclear power plant in southern Ukraine, which is currently under Russian control.

Kotin has requested that the Zaporizhzhia nuclear power plant – Europe’s largest – be made a military-free zone and has warned of the risk of a nuclear disaster like that seen at Chernobyl.

Energoatom has said that Russian forces are currently in the process of redirecting the nuclear power plant’s electricity production to Crimea, to connect it to the Russian grid and disconnect it from the Ukrainian grid.

Estonia and Finland want European countries to stop giving tourist visas to Russian citizens, arguing that they should not be able to go on vacation in Europe while the Kremlin’s soldiers are in Ukraine. Estonian Prime Minister Kaja Kallas said that “visiting Europe is a privilege, not a human right” and that it was time to “end tourism from Russia now”.

Twelve ships have now left Ukrainian ports under a deal brokered between Ukraine and Russia by the United Nations and Turkey.