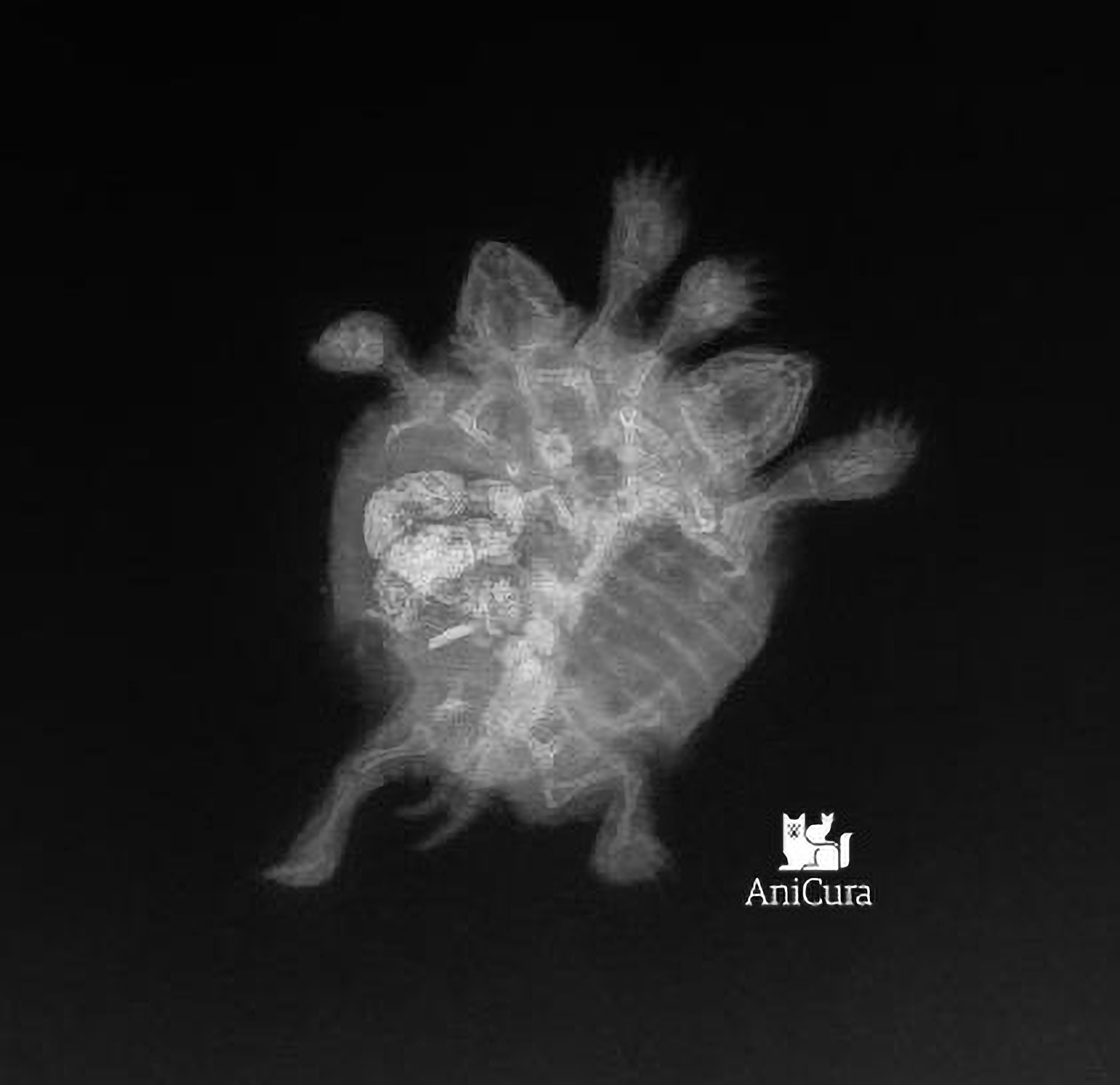 The X Ray of the tortoise Sorte. Sorte an African spurred tortoise, (Centrochelys sulcata), has two heads and two tails, and was born in Putten, Netherlands.  (AniCura/Zenger)

A rare two-headed baby tortoise has baffled experts, who predict it’s likely to live a long, healthy life despite its anomaly.

The mutant tortoise has two heads and four front legs but only one set of internal organs, a computed tomography-CT scan has revealed.

The African spurred tortoise (Centrochelys sulcata) is listed as an endangered species on the International Union for Conservation of Nature’s (IUCN) Red List of Threatened Species.

This one – nicknamed Sorte, or ‘Luck’ in Portuguese – was hatched on August 1 to breeder Ruben van Schoor in Putten, the Netherlands.

Veterinarian and reptile expert Sandra Vink from AniCura vets told Zenger News: “It’s the first one in the Netherlands as far as we know. It is very rare, especially with this specific kind of tortoise.”

She added: “As far as the owner knows, it’s the first one in the world. It is very uncommon.

“We’ve found few cases in media. Usually they do not have long to live.

“Often the animals have a complete second organ system, also with two hearts, and they are very sensitive to diseases.

“It has a good chance of surviving because it looks like it has one heart, one gastrointestinal tract.

“This means it’s actually one animal with two heads.

“If it would have been a Siamese twin, it would have a bigger chance of getting sick and if one of the parts would die, the other would too.

“This is what we have seen through the CT scan – so good news for Sorte.”

She went on: “It’s very active and eats well. So all signs point to that she can live a long and happy life, because she is cared for very well by her owner.

“In nature, she would not survive on her own. The two heads often don’t agree which way to go.”

Speaking about the reason for the mutation she explained: “You often get conjoined twins, with their own organ systems. But because this is one tortoise, you can’t really speak of that.”

The phenomenon of double-headed creatures goes back at least 150 million years. It has been found in beef cattle, shrimp, snakes, kittens, sharks, and turtles.

It is among snakes where it is most frequently reported. In Virginia, a venomous copperhead snake was found with two heads in 2018 in a suburban backyard.

Reptiles, such as turtles, are most frequently to be born with two heads. Scientists theorize that this is because of their offspring are greater in number than among mammals, as well as environmental factors that affect the growth of embryos.