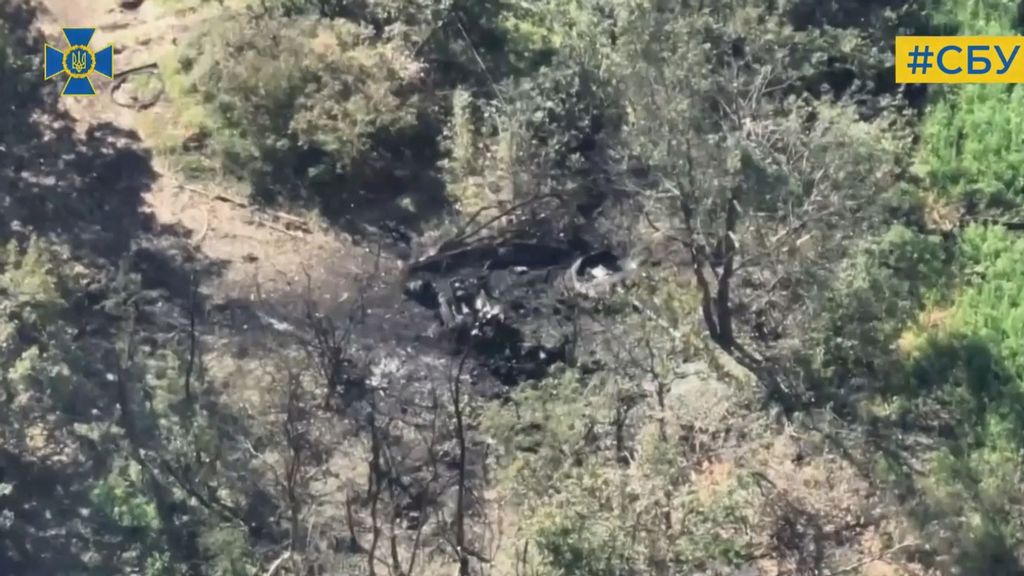 Destroyed Russian tank stands near trees in Ukraine in an undated photo. Counterintelligence officers of the Security Service of Ukraine together with fighters of the 112th brigade of Territorial Defense Forces destroyed 9 units of Russian military equipment.(@SecurSerUkraine/Zenger)

These images from Ukrainian military counterintelligence show how their special forces have destroyed nine units of Russian military equipment including tanks over the last week.

The images show how, using attack drones, they took out the Russian gear, including a tank, somewhere on the front lines in Ukraine.

The footage was obtained from the Security Service of Ukraine (SBU), Ukraine’s main intelligence agency, on Sunday, August 7, along with a statement saying: “Military counterintelligence officers of the SBU continue to ‘demilitarize’ the occupiers with strike drones.

“Only last week, our special forces, together with the soldiers of the 112th Terodefense Brigade, destroyed 9 units of Russian military equipment.

“So the Ukrainian defenders send a passionate ‘hello’ to the enemies and ask them to perform a song about ‘a dream that is dreamed every night.’ Of course, scary. Because real horror awaits all the occupiers as long as they remain on Ukrainian soil.

“We continue to work until complete Victory! Glory to Ukraine!”