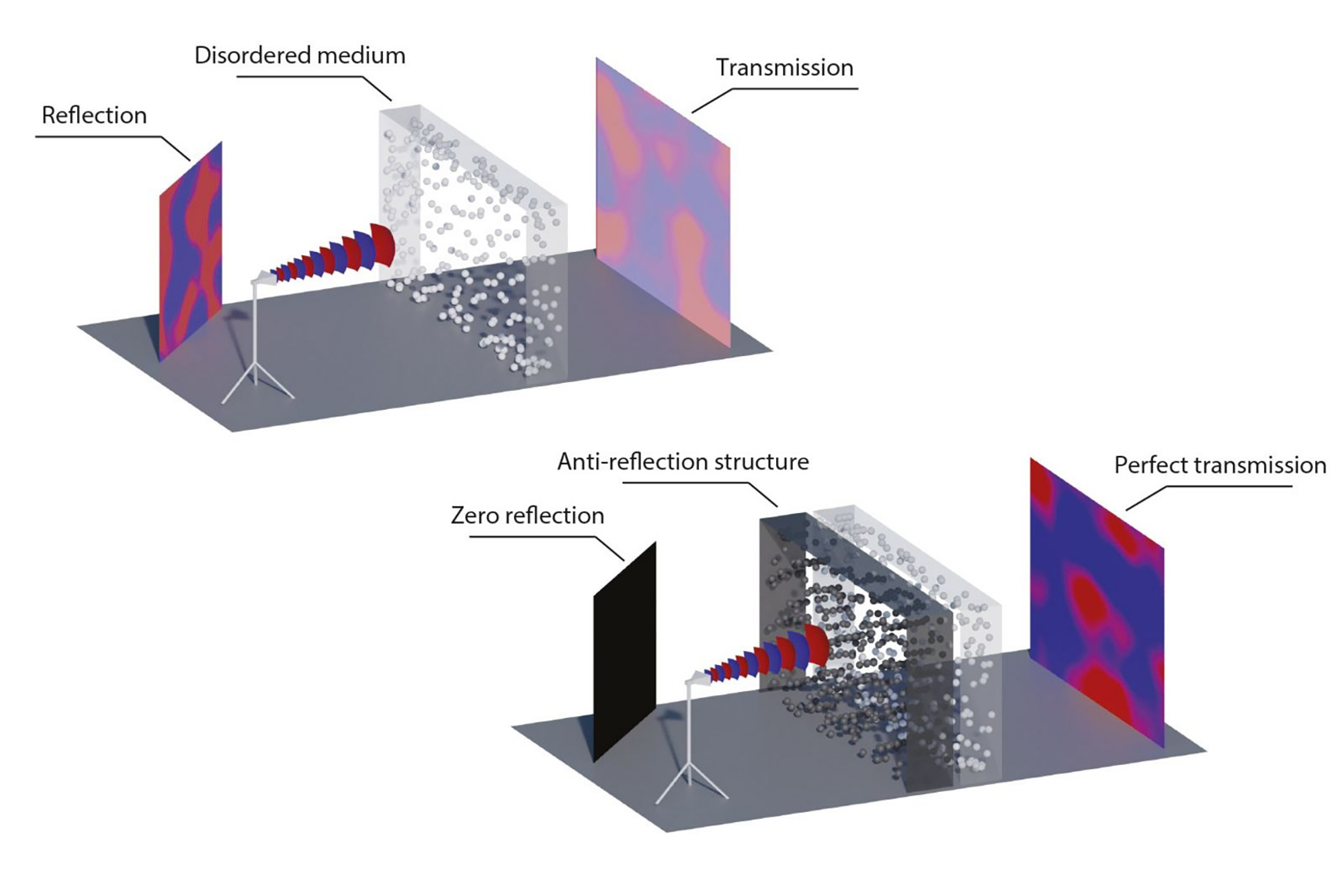 Picture shows sketch of the concept: a disordered medium (a) is made perfectly transmitting by placing a custom-made anti-reflection coating in front of it (b). TU Wien in Vienna (Austria) and the University of Rennes (France) have developed a method to eliminate wave reflections altogether. (TU Wien/Zenger)

A tailor-made structure may make microwave WiFi signals more transmittable through walls without reflection, according to new research.

This works in much the same way as an anti-reflective coating works on a pair of eyeglasses, which also has implications for future 6G mobile communications.

Annoying reflections disrupt the transmission of waves, including visible light and invisible mobile communications, and in a new paper appearing in the journal Nature, scientists at the Vienna University of Technology and Rennes University in Austria offer a method to utterly eliminate wave reflection.

The paper is titled “Customized anti-reflection structure for perfect transmission through complex media.”

“You can think of it like the anti-reflective coating on glasses,” says Professor Stefan Rotter of Vienna University of Technology.

“You add an extra layer to the lens, which then causes light waves to reach the eye better than before. The reflection is reduced,” he said.

While this is simple in the case of eyeglasses, a more difficult problem arises in the case of a disordered medium such as the wall of a building, for example, when a wave is repeatedly scattered and deflected until it finds its way out of this effective labyrinth.

Fog, a cloudy pane of glass, or a lump of sugar that reflects light is such a maze. A reinforced concrete wall offers a barrier penetrated by radio waves.

Presented with such an obstacle, radio waves are scattered, reflected, or absorbed by the wall, which only admits part of the waves.

With the addition to the wall of a tailor-made anti-reflective layer, the entire WiFi signal can be channeled through the wall without reflection.

The Austrian researchers had not even known whether this was possible even on a theoretical level, but have now shown a concrete calculation method and also tested it successfully in experiments.

By sending microwaves through a complex, disordered labyrinth of obstacles, to which an anti-reflection structure was calculated and placed in front of the obstacles in the experiment, the reflection was made to almost completely disappear.

None of the waves returned to the side from which they were irradiated.

Using an additional layer on a barrier, even with complex wave scattering, any reflection can be prevented, when the manner in which reflecting elements of a barrier are understood.

“You first have to simply send certain waves through the medium and measure exactly how these waves are reflected by the material,” said co-author Michael Horodynski.

“We were able to show that, with this information, a corresponding compensating medium can be calculated for any medium that scatters waves in a complex way, so that the combination of both media allows the wave to pass completely. The key to this is a mathematical method that can be used to calculate the exact shape of this anti-reflective coating” he said.

In the experimental implementation of this new method, microwaves were first sent through a metallic waveguide, in which the waves were scattered by dozens of small metal and Teflon objects placed in a completely random manner. About half of the microwave radiation got to the other side, and the rest was reflected.

After the scattering behavior of a reflecting structure is precisely measured, according to the scientists, it was possible to use the newly developed method to calculate which additional scattering points would form a perfect anti-reflection layer. In effect, wave scattering can be compensated by additional, calculated scattering.

The implications for the discovery are quite broad.

The authors of the study found that an algorithm can be specified to calculate necessary compensating scattering, opens up possibilities not only for WiFi, but also in imaging processes such as microscopes.

Another area where it may prove useful is in 6G, the next generation of mobile communications after 5G.

In 6G, the intensity of mobile communications signals could be reduced if sent from transmitter to receiver on suitable paths with as little reflection as possible.