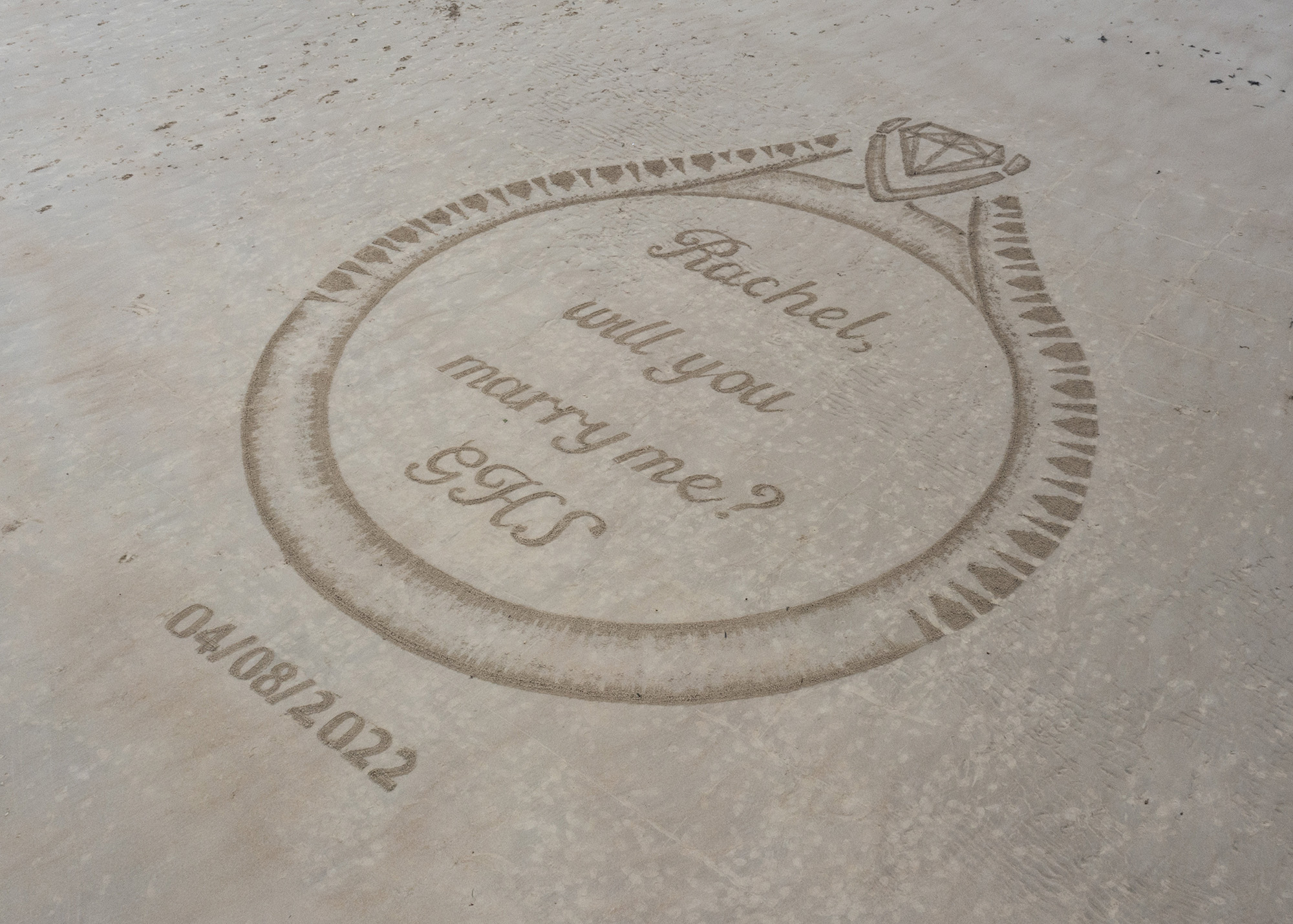 The sand engraved proposal which George Smith proposed with to his girlfriend Rachel Hunter at King Edward’s Bay in Tynemouth, England on August 4, 2022. (Claire Eason,Soul2Sand,SWNS/Zenger)

This heartwarming video shows the moment a romantic man proposes to his girlfriend by having a giant picture of her engagement ring carved onto their favorite beach.

Drone video captured the moment Rachel spotted the 50-foot carving of a diamond ring which was engraved into the sand at King Edward’s Bay in Tynemouth, England, in the United Kingdom.

Inside the ring were the words: “Rachel, will you marry me? GHS”.

Smith then got down on one knee and proposed to Hunter before presenting her with the one-carat diamond ring on Thursday, August 4.

Smith said: “I wanted to do something special for the proposal at King Edward’s Bay which is our favorite beach.

“I contacted beach artist Claire Eason to copy the ring I’d bought Rachel so she would see from the cliff path.

“Everything had to be timed to perfection because there was only an hour window for me to get Rachel to the beach before the tide came in.

“I was panicking and worried we’d get to the beach just to see the design get washed away.

“When we got to the spot above the beach I told Rachel to look at the sand art and when she turned back around I was on one knee holding the ring.

“She was really taken aback and luckily she said yes.

“We went down to the beach and people were cheering and the bar on the beach was belting out ‘Love Shack.’ It was a really special moment.”

She said: “George wanted his proposal to Rachel to be unique and memorable and he contacted me to see I could help.

“He had a beautiful ring ready and we based the design on that.

“King Edward’s Bay is their favorite beach and a dramatic backdrop to pop the question.

“George revealed the design high on the cliff top and proposed on one knee there.

“Rachel said ye and everyone on the beach cheered and a warm fuzzy feeling was definitely palpable.”

Smith and Hunter, both of whom are attorneys, live near Tynemouth and plan to get married in the summer of 2024.