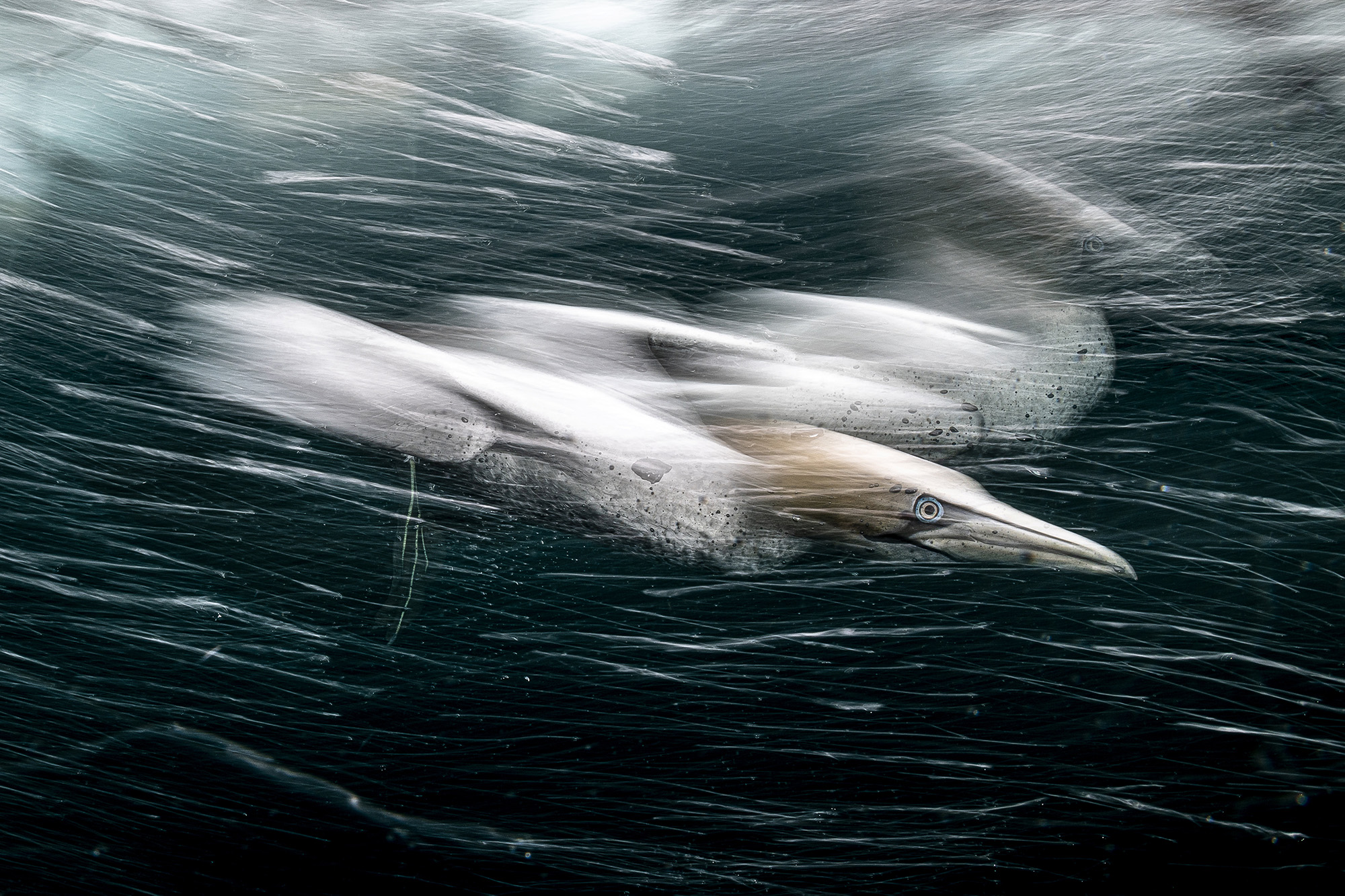 Smashing through the water at 60 miles per hour, this shot of a gannet in the Shetland Islands, in the U.K., has scooped a British photographer the Grand Prize in an international photo competition. Undated photograph. (Henley Spiers,HIPA,SWNS/Zenger)

Smashing through the water at 60 miles per hour, this shot of a gannet in the Shetland Islands in Scotland has scooped a British photographer the Grand Prize in an international photo competition.

A gannet is a diving sea bird found in the North Atlantic, South Africa, Australia, and New Zealand. A voracious eater of fish, it can dive from heights of 100 feet to dash into the water to catch its prey with its sharp beak.

Speaking of how he got his shot, the professional underwater photographer said: “The photograph was captured on my very first day visiting Shetland, the northernmost location in the United Kingdom, a cold, harsh, and wild place of which I have grown extremely fond.

“The handsome gannets visit here seasonally to nest, turning the dark cliffs white – they are one of the most impressive animals I’ve ever come across, masters of both air and sea.

“This photograph is captured underwater, surrounded by diving gannets and I tried to display the controlled violence of the scene with a photograph which goes beyond what is seen by the naked eye.

“Dialing my shutter speed down, and moving my camera along with the movement of the seabirds, an artistic blurring occurred, eventually after many attempts, leading to the frame we see here.”

He added of the image, taken off Noss Island in 2021: “When the fish are spotted, the gannets position themselves in the wind and extend their wings as brakes to precisely adjust their position in relation to their prey.

“The speed of these amazing birds hitting the water reaches 100 kilometers [60 miles] per hour, slashing the surface of the water like a living torpedo, absorbing the huge blow through their strong skull and protective airbags in the head and chest.

“The sound of her penetrating the surface of the water was loud.

“I wanted to create a new photo of these seabirds so I tried to capture their movement in slow exposure.

“Its high speed caused many failures, but what was important to me was to maintain strong eye contact with the bird’s eye.”

He continued: “Tragically, the gannets of Shetland are in the midst of an avian flu pandemic which has ripped through their colonies.

“I recently returned from Shetland and bore witness to heart-wrenching scenes within the bird populations.

“One can only hope that nature will be sufficiently resilient to resist the damage caused by this disease.”

Winner of the Color section was Vietnamese drone photographer Nguyen Vu Cao with a picture of boats going to harbor during a storm.

He said: “The fishermen’s boats were neatly lined up when installed to avoid typhoon No. 9, the most powerful typhoon to hit Quang Ngai in 30 years, completely destroying 325 homes and damaging more than 140,000.”

Winner of the portfolio section was Canadian biologist Paul Nicklen whose pictures included this one of a bear taken in minus 22 Celsius (minus 7 Fahrenheit) degree temperatures.

He said: “I am fascinated by changing seasons and their effect on the wildlife populations at our planet’s extremes, where conditions can shift dramatically.

“As temperatures steadily drop to -22°F on the Fishing Branch River in Canada’s Yukon, for example, young bears like this ice-covered female must forage non-stop for fish, carrion, and other sources of nutrition until it is time to sleep for the winter.

“Dwindling resources force her typically isolated, nomadic species into close proximity, so she must be on the lookout for big, lumbering males or protective mothers with their cubs at every moment.

“I hope images like this will help underscore the struggle of life in the wild and convince us to rethink actions that jeopardize the survival of our animal cousins.

“Our urgency in dealing with the existential threat of climate change will make all the difference for her future and those like her.”

His fellow Canadian, Thomas Vijayan, came fourth in the Nature category with an amazing shot of an orangutan climbing a tree with the branches reflected in the water below.

He said: “This confusing frame for viewers came about after a grueling boat and foot trip in shallow waters teeming with crocodiles, near the island of Borneo in Indonesia.

“When I got to this huge tree I waited for the orangutan to climb before me to take a picture of him with the background of the sky, but the orangutan only looks up during his climb.

“So there’s only one way to get a picture… to stay on top of it and take a picture of him with the sky reflecting off the stagnant water below.

“The hardest part was keeping quiet while he looked at me.”

Ali Saifaldeen from Qatar won the portrait section with this wonderful study of a gorilla’s face in the rain in Uganda.

He said: “Her name is Kibande and she is a mountain gorilla from Rushegura in Uganda.

“In wet weather we encountered a family of 19 gorillas. Kibande was in an open area and when she closed her eyes, the photo was taken of her relaxing in the rain.”

The winner of the Nature category was this delicate underwater shot of a tiny 3-millimeter (0.11 inches) oyster larvae.

“It is very small in fact, the size of the oyster is only 3 millimeters, and the total is about 20 millimeters [3/4 inch].

“Two round eyes in the middle stare to this side. Around it is a swimming organ called the phylum, which is lined with cilia.

“It’s a cautious creature, and even if it feels a slight splash of water, it will come back to the oyster.”

Runner-up in Nature was Marcio Cabral from Brazil with a lovely landscape of a glow-in-the-dark plant.

He said: “This is a photo of a field of wild pepalanthus, a rare flower that grows only in a few places in the Cerrado, the Brazilian savannah.

“This flower can reflect light when photographed against the backlight. So, during sunrise and sunset, these flowers glow to create a magical effect.

“This flower is called Semper Viva (Always Alive) because after harvesting and drying, it can last a long time without spoiling or losing its color and lustre.”

Third in the black and white category is this amazing landscape of 2,000-year-old Sotolin trees in Mexico.

Photographer Luis Lyons said: “‘Sotolín’, the ‘Beaucarnea gracilis’ tree in Mexico, is an endemic plant of the Tehuacán-Cuicatlán Biosphere Reserve, a nature reserve with a very dry climate.

“The tree has managed to adapt to difficult conditions, accumulating water in its thick trunk to survive the dry season.

“The age of the trees in the photo is estimated to be more than two thousand years.”