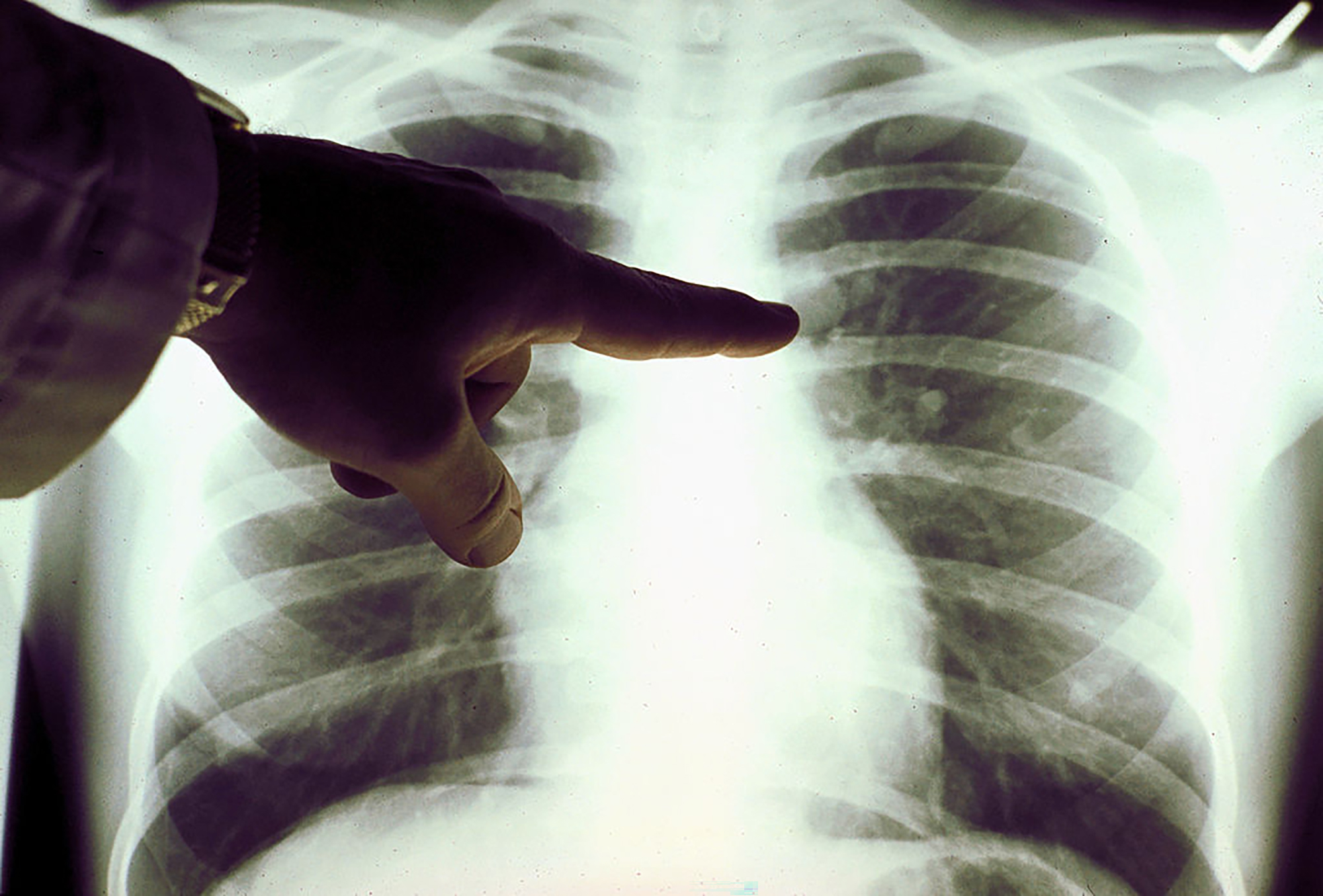 A view of a close up of a lung x-ray of a cigarette smoker in an undated photo. (Photo Courtesy of the American Cancer Society via Getty Images)

Deadly cancers may have met their match in an innovative immunotherapy in combination with a drug that blocks a genetic mutation in lung cancer, according to a new study.

Researchers at the Francis Crick Institute in the United Kingdom published a study in Science advances about a combination therapy for cancer that is now at the clinical trial stage.

Only about a quarter of people diagnosed with lung cancer survive more than five years after diagnosis, while about 1.8 million people die from lung cancer every year.

Lung cancer is the leading cause of cancer death globally.

While immunotherapy works for some, most patients do not respond positively.

“In recent years, there has been a lot of attention on whether combining immune checkpoint blockade, a type of immunotherapy, with a KRAS-inhibitor could be effective. This inhibitor works by blocking a mutated version of KRAS, a gene that helps control cell growth and death,” said researcher and study author Julian Downward of the Francis Crick Institute.

“As the mutation is present in about one-third of lung cancer cases, it is a promising therapeutic target,” he said.

The KRAS gene is a member of the RAS family of genes which are implicated in about 20 percent of all cancers, including melanoma, bowel cancer, and pancreatic cancer.

The researchers observed how lab mice were affected by combining immune checkpoint blockade with KRAS inhibitors.

But where the immune system was not able to mount a strong response, the combination treatment was ineffective.

The first KRAS-inhibitor was approved for use in 2021 in non-small-cell lung cancer cases with the KRASG12C mutation.

Because immunotherapy was not successful, this may mean that their tumors are not ‘immune hot’ and thus unlikely to respond to the combination of treatments.

Therefore, the researchers of the new study are looking for patients exhibiting ‘immune hot’ tumors to participate in clinical trials to be sure that the combination therapy is tested on those most likely to respond.

“KRAS inhibitors are very new so there’s still a lot to learn about when they are most effective and which other treatments they can safely be combined with to give patients the best chance of living longer,” said study co-author Miriam Molina Arcas of the Oncogene Biology lab at the Francis Crick Institute.

“Our study is an important part of this, suggesting that combining immune checkpoint blockade with a KRAS-inhibitor is likely to work in specific cancers. It is crucial this is factored into the design of future clinical trials,” she said.

The researchers looked at the impact of KRAS mutation on the immune system, the tumor, and the environment around it.

In lung cancer, they found, mutated KRAS weakens signals which help activate the immune system while boosting hormone-like molecules which help create an environment that supports the tumor.

In mouse models, when the mutated gene was inhibited, the factors favoring the tumors did not occur.

For example, there were fewer cells in the tumor environment suppressing the immune system and more cytotoxic T cells which kill cancerous cells.

While continuing to study the role these genes play in cancer, they are also looking at how to stimulate the immune system to destroy cancer cells that have developed resistance to RAS inhibitors.