The discoveries were announced by the Pompeii Archaeological Park on August 7.
By Alice Amelia Thomas August 10, 2022
Facebook
Twitter
Linkedin
Email 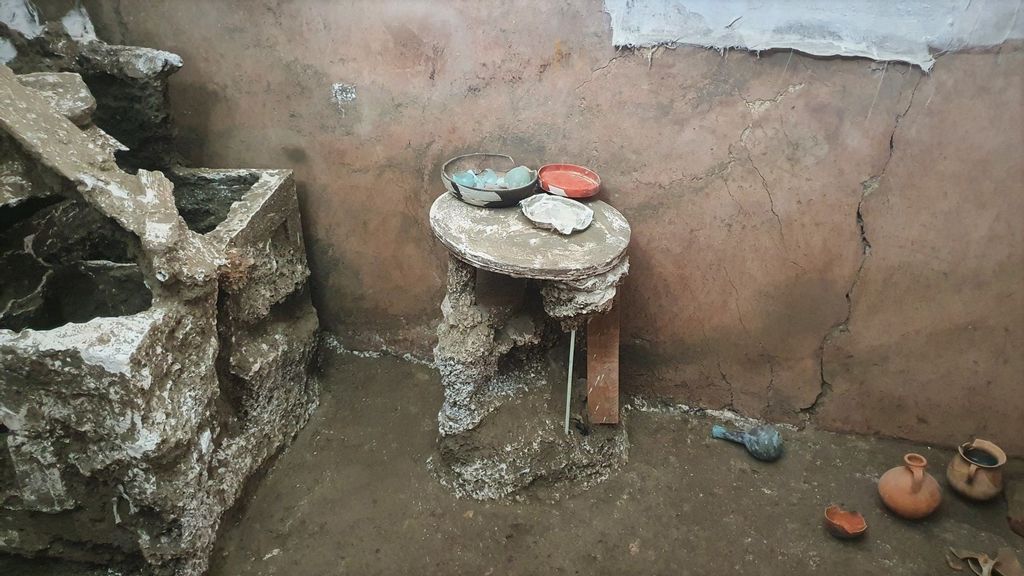 Pictures shows some of the items from the house that are being recovered, in undated photo. The house was found 2018, during the course of maintenance operations and are now investigated, in Pompeii, Italy. (Archaeological Park of Pompeii/Zenger)

A series of four new rooms unearthed in a family home in doomed Pompeii have revealed how the Roman city’s middle class struggled to keep up their status.

Expert Gabriel Zuchtriegal – director general of the excavation site – has shown how the new rooms highlight the vast difference between the ancient city’s elite and the rising middle class.

He explained: “In the Roman empire, there was an ample chunk of the population that struggled with their social status and for whom daily bread was anything but a given.”

The expert – who released details of the new find this week – shows how ordinary citizens’ lives were a far cry from the sparkling fountains and mosaics of the ruling classes.

The cabinet contains what looks like a sink and the remains of a simple faucet.

The discoveries were announced by the Pompeii Archaeological Park on August 7.

The four new rooms were excavated in a house that was first unearthed in 2018.

Researchers found a three-legged table set, as well as a few decorative bowls, an incense burner, a wooden dresser, and remains of a bedframe.

A trunk with an open lid and scattered possessions might give a clue to how the owners fled the devastating volcanic eruption that engulfed the city.

Inside the trunk, an oil lamp was decorated with a relief of Zeus being turned into an eagle while the bedframe contained the traces of a pillow.

The bed is considered to be similar to three children’s beds found in another room in a home in Pompeii last year.

Researchers believe that it doubled up as a storage room and a bedroom for a family of servants.

The new revelations about ordinary Romans echo similar excavations by archaeologists in Naples focused on the lives of slaves and servants in Pompeii.

Previous excavations have examined the beautiful frescos and villas belonging to the city’s ruling class.

Pompeii was buried beneath a sea of volcanic ash after a massive eruption from Mount Vesuvius in AD 79.

The city lay hidden for hundreds of years before it was unearthed in the 1700s by archaeologists.

They were astonished to find an entire city preserved perfectly at the very moment the volcano struck.

As well as homes and shops, they discovered an entire forum and an amphitheater.

People’s bodies were preserved in the exact moment they were killed when they tried to flee.

And ordinary day-to-day activities – like baking bread or eating at a local bar – were unearthed too.