The bizarre animal has a distinctive creamy-yellow shell - and is an example of ocean gigantism.
By Simona Kitanovska August 10, 2022
Facebook
Twitter
Linkedin
Email 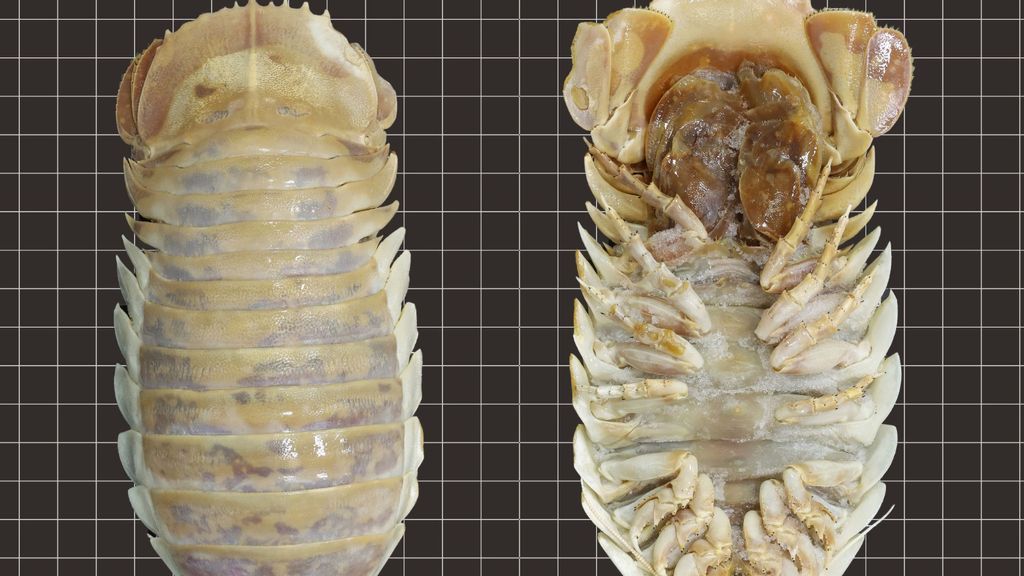 A giant deep-sea crustacean, named Bathonymus yucatanensis, was discovered in the Gulf of Mexico, off the coast of the Yucatan Peninsula. Undated photograph. (Simon Galloway,SWNS/Zenger News)

A giant deep-sea crustacean, a huge marine relative of the common woodlouse or roly-poly, has been discovered in the Gulf of Mexico.

Measuring more than ten inches long, the isopod, a new species, is 25 times bigger than its little cousin.

It was found living more than 2,500 feet beneath the waves off the Yucatan Peninsula along Mexico’s eastern shore.

It is at the site where an asteroid strike wiped out the dinosaurs 66 million years ago.

Named Bathonymus yucatanensis, it adds to evidence to the notion that we know more about space than the oceans.

The bizarre animal has a distinctive creamy-yellow shell – and is an example of ocean gigantism.

Some creatures that dwell in the deep tend to grow much bigger than their relatives in shallower waters or on land.

Most isopods measure less than 10 millimeters (0.4 inches) in length. The 20 species in the ‘supergiant’ Bathynomus genus grow to be more than 30 times larger.

They have gone viral on the internet – making them the most famous aquatic crustaceans since Sebastian of The Little Mermaid.

The mysterious and primitive group inhabits the benthic zone – the ocean’s deepest reaches, which are rarely explored in person.

Their cousins range from crabs, shrimps, and lobsters to woodlice, pillbugs and roly polys – which feed on decaying matter and are familiar to anyone who has lifted up a rock or dug around in the garden.

They look quite similar – but for their extraordinary size. The largest reach is 1 foot 8 inches in length. Although they look scary, they are completely harmless to humans.

Their strange features and unusual dimensions have spawned endless memes and a range of products celebrating their endearing weirdness – from plush toys to phone cases.

B. yucatanensis is another addition to the isopod pantheon. It brings the total of known species of Bathonymus in the Gulf of Mexico to three.

It was initially thought to be a variation of B. giganteus – one of the largest, found in 1879, while B. maxeyorum was described in 2016.

But closer examination of the specimen revealed an array of unique features. It was captured in a baited trap in 2017.

Lead author Ming-Chih Huang, of the National University of Tainan, Taiwan, said: “B. yucatanensis is morphologically distinct from both B. giganteus and B. maxeyorum.”

Now tended by the Enoshima Aquarium in Japan, the individual was subtly different than its relatives.

Huang said: “Compared to B. giganteus, B. yucatanensis has more slender body proportions and is shorter in total length – and the pereopods or thoracic limbs are more slender.”

It also has longer antennae. The two species have the same number of tail-end spines called pleotelson.

Huang said: “Bathynomus giganteus was discovered over a century ago, and more than 1,000 specimens have been studied with no suggestion until now of a second species with the same number of pleotelsonic spines.

“Superficial examination, using only pleotelson spines, could easily result in specimens of B. yucatanensis being misidentified as B. giganteus.

“Compared with B. maxeyorum, the most distinctive feature is the number of pleotelson spines – 11 spines in B. yucatanensis versus 7 in B. maxeyorum.”

The blotchy colors of the shell further distinguished it from its greyer relatives.

In order to be sure, the scientists conducted a molecular genetic analysis comparing B. giganteus and B. yucatanensis.

Huang said: “Due to the different sequences of the two genes (COI and 16S rRNA), coupled with differences in morphology, we identified it as a new species.”

The researchers constructed a family tree which showed B. yucatanensis as most closely related to B. giganteus.

Huang said: “B. giganteus is indeed the species closest to B. yucatanensis. This indicates the two species likely had a common ancestor.

“Additionally, there may also be other undiscovered Bathynomus spp. in the tropical western Atlantic.”

The study also clarifies that specimens from the South China Sea identified as B. kensleyi are actually B. jamesi.

B. kensleyi is restricted to the Coral Sea, off the coast of Australia.

Huang said: “It is increasingly evident that species of Bathynomus may be exceedingly similar in overall appearance, and also that there is a long history of misidentification of species in the genus.”

The newly established species distinctions have implications for conservation.

Added Huang: “Some species of Bathynomus with commercial potential have become the targets of deep-sea trawl fisheries.”

While giant isopods are only sporadically exploited, “for the management of Bathynomus fisheries, it is important to know precisely which species are being caught.”

In the past few years we’ve seen many new species reeled in from the deep oceans including the deepest-dwelling fish in the world, hairy-chested ‘Hoff’ crabs, eye-catching neon fish and the longest animal ever recorded – a floating zooid colony measuring 154 feet long.

The multicellular units develop from a single fertilized egg and combine to create functional colonies able to reproduce, digest, float, maintain body positioning and use jet propulsion to move.

B. yucatanensis is described in the Journal of Natural History.