The footage was obtained from the Ukrainian Minister for Infrastructure, Alexander Kubrakov, 39, on Friday, August 5.
By Joseph Golder August 10, 2022
Facebook
Twitter
Linkedin
Email 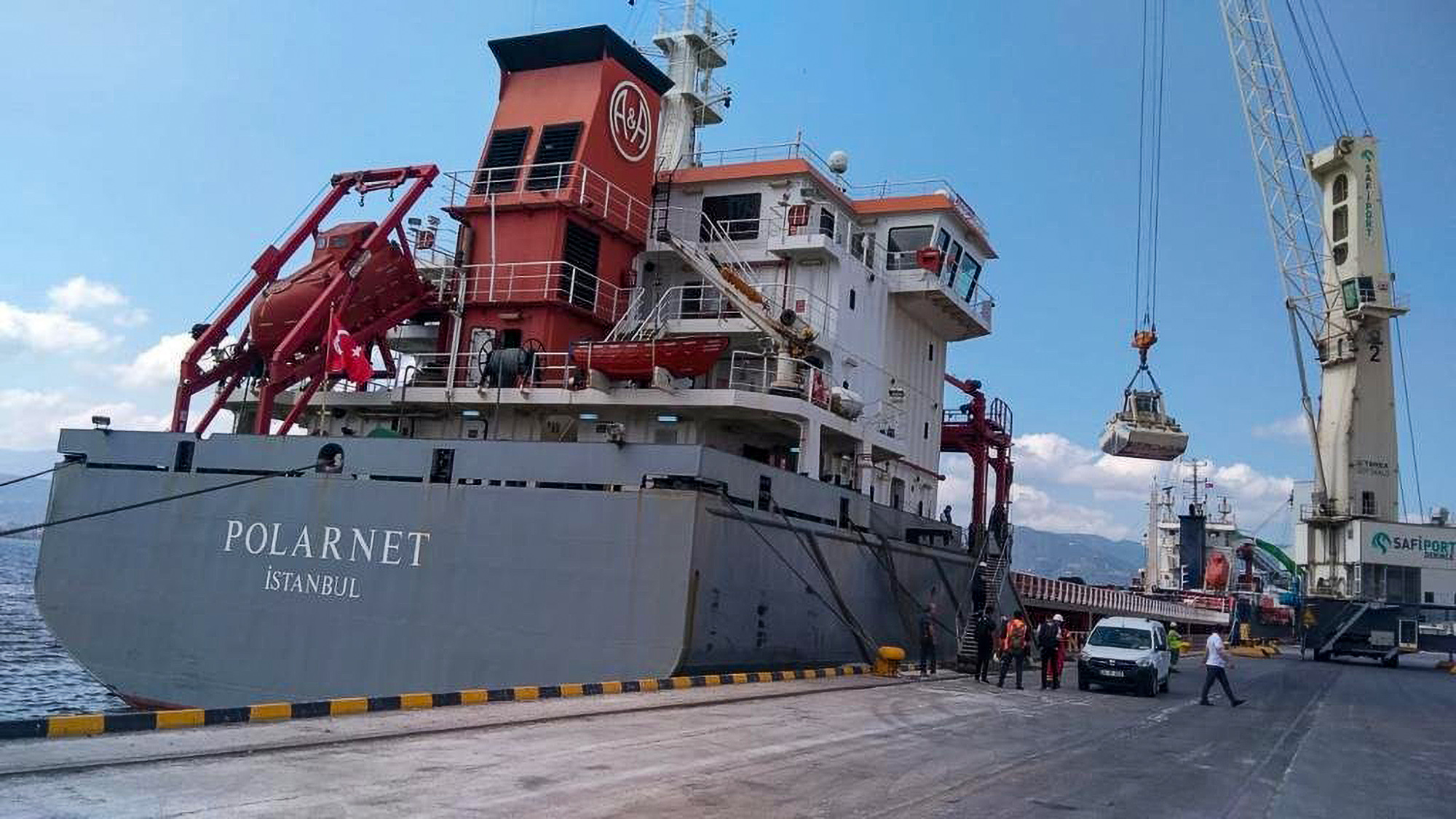 The Polarnet vessel, one of the first ships of the Initiative for safe transportation of grain and food products from Ukrainian ports, successfully arrives at its final destination port in Turkey on Monday, Aug. 8, 2022. The arrival of the Navi Star, Rojen vessels, which left in the same ship caravan with Polarnet, is expected at their destination ports approximately in a week according to statement of the Ministry of Infrastructure of Ukraine.  (@MinInfra.UA/Zenger)

The first ship carrying Ukrainian grain and agricultural products has arrived at its final destination – in Turkey.

A photograph obtained from the Ukrainian Ministry of Infrastructure reportedly shows the POLARNET vessel in the port in Turkey after it successfully passed inspection in Istanbul.

The footage, obtained from the Ukrainian Minister for Infrastructure, Alexander Kubrakov, 39, on Friday, August 5, shows the ship getting ready to leave port in Ukraine at the beginning of its trip.

The Ukrainian Ministry of Infrastructure said on Monday, August 8 (in English): “‘Grain Initiative’: the first ship with Ukrainian agricultural products arrived at its final destination.

“The POLARNET vessel, which was one of the first to take part in the implementation of the Initiative on safe transportation of grain and food products from Ukrainian ports, successfully passed the inspection by the inspection team in Istanbul and arrived at its final destination in Turkey.”

And Dmytro Kuleba, 41, the Ukrainian Minister of Foreign Affairs, is quoted in the statement as saying: “The arrival of the first ship with Ukrainian grain to the Turkish port is a signal of hope for every family in the Middle East, Africa and Asia: Ukraine will not leave you.

“We have always been, are, and will be a reliable supplier of agricultural products. Unlike Russia, we do not play the ‘Hunger Games’.

“Full responsibility for the further functioning of the “grain corridor” rests with Russia. If it complies with its obligations, Ukrainian food exports will continue to guarantee stability for our Middle Eastern, African and Asian friends.”

And Kubrakov added: “This first successful experience of the implementation of the ‘grain initiative’ allows us to look with optimism at the future prospects of transportation.

“I am grateful to our partners from the UN and Turkey for effectively guaranteeing the safety of the ship’s movement and maximum cooperation at all stages of the implementation of the agreements.

“I am especially grateful to the crew of the POLARNET vessel for being one of the first to use the “grain corridor”, thereby opening the way for all other vessels.”

This comes after the first ship carrying Ukrainian grain set out on Monday from the port of Odesa. The Sierra-Leone flagged vessel Razoni is headed to Lebanon with over 26,000 tons of cargo.

Zenger News contacted the Ukrainian Minister for Infrastructure for further comment, as well as the Russian Ministry of Defense, but had not received a reply at the time of writing.