Their research was published this month in the journal Advances in Atmospheric Sciences.
By Martin M Barillas August 9, 2022
Facebook
Twitter
Linkedin
Email 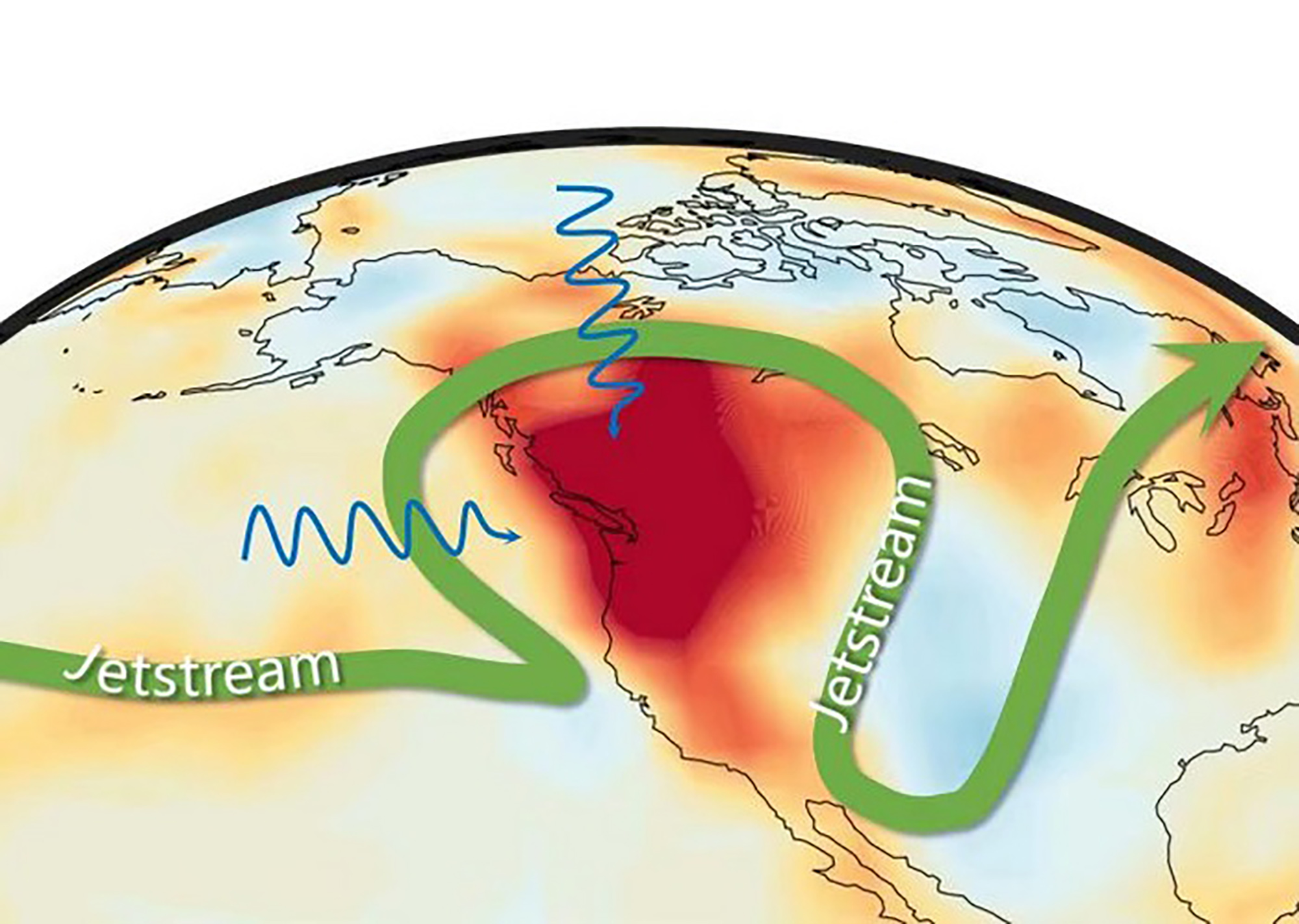 Shading represents surface air temperature anomalies, and the green vector denotes jetstream (a narrow band of very strong westerly air currents near the altitude of the tropopause). Two blue vectors indicate that the heatwave is related to anomalous circulations in the North Pacific and the Arctic. (Jiayu Zheng/Zenger)

Climate forecasters are predicting that the recent heat wave in the United Kingdom and North America, will become a normal summer occurrence by 2050 despite skeptics.

By analyzing atmospheric circulation patterns and human-caused emissions in 2021, a research team believes these led to the 2021 heat wave in North America.

Their research was published this month in the journal Advances in Atmospheric Sciences.

The Chinese researchers concluded that greenhouse gases, such as carbon dioxide, are the primary reason for increased temperatures in the past and will continue to be the main contributing factor.

The abstract of their paper, titled “Unprecedented Heatwave in Western North America during Late June of 2021: Roles of Atmospheric Circulation and Global Warming,” states that “…models show that greenhouse gases are the main reason for the long-term increase of average daily maximum temperature in western North America in the past and future.”

The climatologists claim that extreme heat wave events will increase by more than 30 percentage points in the coming years, mostly due to greenhouse gases.

Lead researcher Chunzai Wang said of the study: “In this paper, we studied the physical processes of internal variability, such as atmospheric circulation patterns, and external forcing, such as anthropogenic greenhouse gases.”

Circulation of air across the globe influences surface air temperatures, which can change based on the Earth’s rotation and natural warming from the sun, according to the researchers.

Such patterns have coincided in the past without causing such a heat wave, according to the researchers.

Based on the Detection Attribution Model Comparison models of the Coupled Model Intercomparison Project Phase 6 (CMIP6) from the World Climate Research Program, they concluded that greenhouse gases affected the circulation patterns and caused the heat wave.

“From the CMIP6 models, we found that it is likely that global warming associated with greenhouse gases influences these three atmospheric circulation pattern variabilities, which, in turn, led to a more extreme heatwave event,” Wang said.

“If appropriate measures are not taken, the occurrence probability of extreme heatwaves will increase and further impact the ecological balance, as well as sustainable social and economic development,” he concluded.

Zenger News contacted Marlo Lewis of the Competitive Enterprise Institute, a nonprofit think-tank based in Washington D.C., for a comment on the new study.

“It is hardly surprising that greenhouse gas emissions have a greenhouse (warming) effect, or that heat waves tend to become more frequent and severe in a warming world.

“However, weather phenomena are complicated. The contribution of global climate change to the occurrence, severity, or duration of any particular heat wave is not easy to discern or quantify,” Lewis wrote, citing various scientific studies.

Lewis stated that while intense or frequent heat waves may increase aggregate heat-related deaths, “it need not and, historically, has not.”

“When hot weather becomes more frequent and severe, people adapt. In the United States, for example, heat-related mortality in major cities has declined decade-by-decade since the 1960s,” Lewis wrote, citing hot spots such as Tucson, Arizona and Tampa, Florida, which have “among the lowest heat-mortality rates.”

“The big picture is twofold. First, global annual deaths due to all forms of extreme weather are almost 99 percent lower than was the case in the 1920s, when the world was about 1 degree Celsius cooler and atmospheric CO2 concentrations more than 100 parts per million lower.

“That is remarkable in itself, but even more so given that global population is about four times larger today than it was in the 1920s,” Lewis said.

Reflecting the research methods employed by the researchers in the new study, Lewis said: “…the scientists used the CMIP6 models to make projections about future heatwaves. Those models are tuned too hot.

“All of them hindcast more warming than has been observed since 1979 in the bulk tropical atmosphere. On average, the CMIP6 warming projection exceeds observation by factor of more than two.”

“Second, I suspect the scientists ran the CMIP6 models with one of th IPCC’s high-end emission scenarios, RCP8.5 or SSP5-8.5. Although dubbed ‘business as usual’ scenarios, those emission pathways are worst-case scenarios and have little plausibility,” Lewis said.