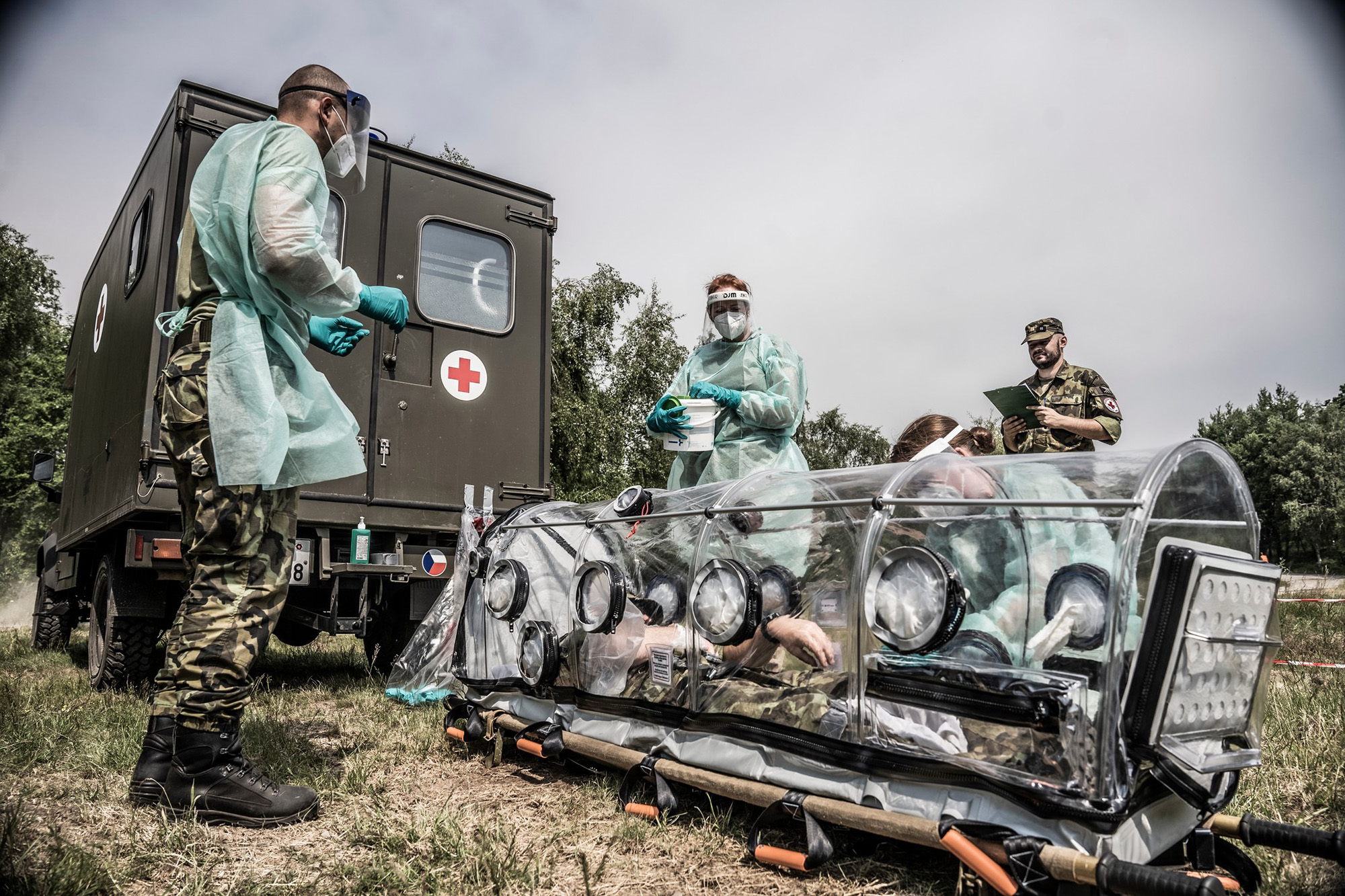 Royal Navy medics have trained in dealing with the aftermath of chemical, biological, radiological and nuclear (CBRN) attacks with NATO allies in the Czech Republic. Undated photograph. (MOD,NATO,SWNS/Zenger)

The recent exercise with NATO allies in the Czech Republic saw medical experts from 13 nations gathered in Tisá, close to the German border, to work together on treatments, decontamination, and dealing with casualties in the wake of such an attack.

Across four days, personnel shared knowledge and dealt with mock casualties at the site of an old chemical and biological testing ground, while a combined medical team of British naval personnel and marines laid on a demonstration of the techniques and procedures the U.K. employs.

Their responsibility is to treat causalities in the field and, as a result, must be highly efficient at setting up medical treatment facilities at a moment’s notice.

During the exercises in the Czech Republic, they were at the forefront of the joint casualty decontamination area, which must be set up rapidly to deal with people exposed to a Chemical, Biological, Radiological, Nuclear (CBRN) attack, decontaminating them, and giving them basic medical treatment before passing them onto the next level of medical care.

“Scenarios like this are needed to keep us grounded and prepared to efficiently treat and care for real-time CBRN casualties we may expect during operations,” said Medical Assistant Jack Franklin.

“As the casualty decontamination area medical team is very small, everyone must be able to take a step back, think and assess the situation.

“This was crucial for the triage medic at the front of the facility who decides, based on protocol who receives treatment first. In real-time this will be a very difficult job.

“In battle, it’s realistic to consider that not everyone is going to survive. Prioritizing a casualty with a better chance of survival, over a casualty with serious injuries is key to prevent quickly consuming our limited time and resources that can prevent us treating other multiple casualties for injuries that we can expect to survive.”

Members of the Royal Marines Band Service operated alongside the surgical group in the contamination area, together giving patients basic medical treatment and assessing their injuries.

The Bands are known for wowing crowds up and down the country with their musical ability, but are also fully trained military personnel, usually providing medical support.

At any given time, one of the bands is also held at short notice to support Royal Navy medical branches on board Royal Fleet Auxiliary ship RFA Argus. Here they receive additional training and undertake a variety of medical support roles.

In the Czech Republic, the medics and Band Service formed a formidable team, assembling the casualty decontamination area in the fastest time recorded for ten years – an impressive 12 minutes 45 seconds.

The testing live exercises came after a phase of theory, practicals and medical simulation, which is all part of a program of essential training that keeps the alliance’s medical teams prepared in case the worse were to happen.

Mock injuries — also known as moulage — were applied to actors who played the role of casualties to bring a further sense of reality to the training.

“From a Royal Marine’s perspective, it was a great insight into how the Royal Navy and Royal Marines Band Service work together during an exercise like this and witnessing/observing the medical treatment itself,” said Marine George Blake, of Commando Logistic Regiment.

“With no previous experience as a team medic or experience with CBRN casualties, I can now happily say in confidence if anything were to unfortunately happen and the Royal Marines were called to assist again, we would know what to do without any issues.

“It was a great experience and very educational as the majority of us were able to get hands-on with the casualties as they came through.

“I was in the cutting team so we had to be careful with any tourniquets on limbs, shrapnel sticking out etc. It wasn’t always as easy as just cutting a straight line through the clothes, we had work in sync together and be able to work around the medics without getting into each other’s way and with no time wasted.”