The solution, according to Emmer, is not more regulation, but rather a taxonomy by Congress that establishes definitions.
By Christos Andreas Makridis August 9, 2022
Facebook
Twitter
Linkedin
Email 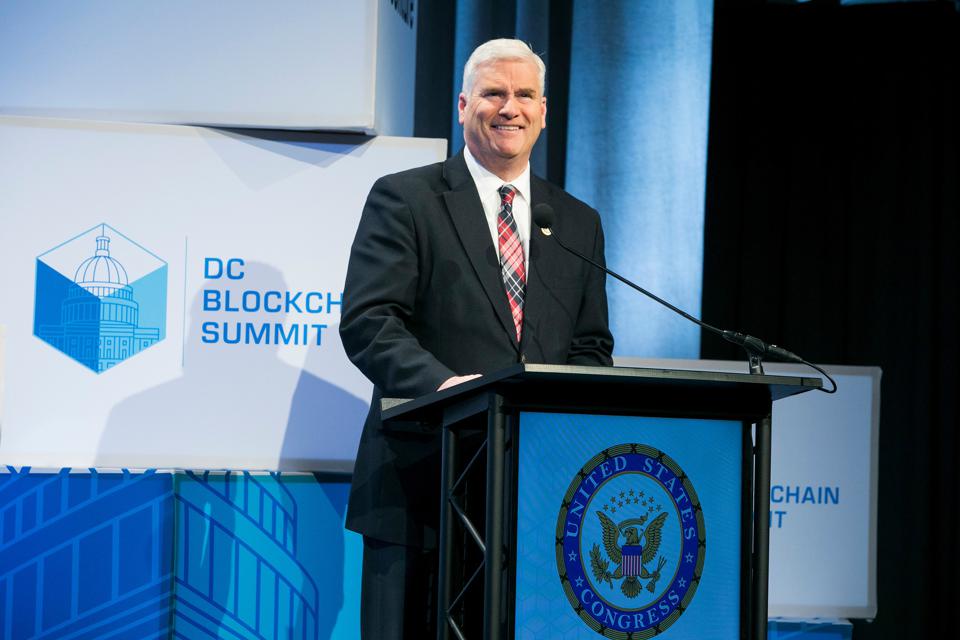 Congressman Tom Emmer speaks at the D.C. Blockchain Summit on May 24, 2022. (Courtesy of Christos Makridis)

The latest “crypto winter” following the collapse of Terra/Luna (R-MN), who discussed the challenges and pitfalls of crypto that may lay ahead because of the specter of federal regulation and intervention. Politicians are often reactive – responding to a problem, or at least a perception of a problem, with artificial solutions.

Referencing the recent deterioration of Terra/Luna, “I am worried about us rushing to solve a problem that too many people in Congress do not understand,” said Congressman Emmer. In particular, policymakers have been debating about how to define a high-quality liquid asset, but the risk is over-regulating it and stifling competition and creating new forms of fragility. “I am concerned that our government would define that as solely U.S. dollars,” Emmer said.

The solution, according to Emmer, is not more regulation, but rather a taxonomy by Congress that establishes definitions and creates a framework for building in web3. There is no debate that there is a role for federal policy—markets require a framework, or “rules of the game,” to function properly. But, “it needs to be a light touch regulatory environment,” Emmer said. “We cannot try and put crypto into a framework that is nearly 100 years old. Many regulators are trying to do just that by defining securities according to the three features of the “Howey test” established in 1933 as a result of the Supreme Court case.”

According to the Howey test, a security has three defining features: (1) there is an investment of money, (2) there is a common enterprise, and (3) there is a reasonable expectation of profits derived from the efforts of others. Under a strict interpretation, houses would be considered a security for consumers: besides the obvious investment of money, they are generally a common enterprise (i.e., a family pooling resources together) and the value of the house appreciates in part due to national or local economic and demographic trends.

Consider the emergence of non-fungible tokens (NFTs). Many NFTs appreciate in value, in part because of the robust community that forms around them. But if such a strict – and outdated – interpretation of securities was applied, then millions of lives would change overnight: home ownership could fall and the emerging creator economy that has been growing rapidly as of late through the sales of NFTs would be discouraged from ever starting creative projects.

Worse yet, creators would flee the United States and build elsewhere. “They will shift activities offshore because they have to,” Emmer said. “We [Congress] need to be the advocates and define what fits the definition of currency, commodity, security… if we do that, we can give specific cowboys to regulators,” said Emmer. Absent a framework, federal regulators risk taking an ad hoc approach to governing crypto and web3, disrupting the lives of builders and society in the process.

Ultimately, the debate about the future of web3 regulation is a question of choice and personal responsibility. “I trust myself more to make my own mistakes, fail, figure it out, and climb back to the top of the hill, rather than having my government say ‘you’ve got to be careful that someone might take advantage of you, so we’re never going to give you the opportunity to fail or succeed,’” said Congressman Emmer.

Senators Cynthia Lummis (R-WY) and Kirsten Gillibrand (D-NY) introduced a bill that outlined new comprehensive regulation for cryptocurrencies, including a tax exemption on transactions under $200 and a clearer definition on crypto securities versus crypo commodities. The bill aims to “provide clarity to both industry and regulators, while also maintaining the flexibility to account for the ongoing evolution of the digital assets market.”

The proposed legislation, although an important step towards greater regulatory clarity, may also open the door to those looking for opportunities to expand control over the web3 landscape.