The stunned rider puts his hands to his head and looks in shock at the failed stunt.
By Joseph Golder August 9, 2022
Facebook
Twitter
Linkedin
Email 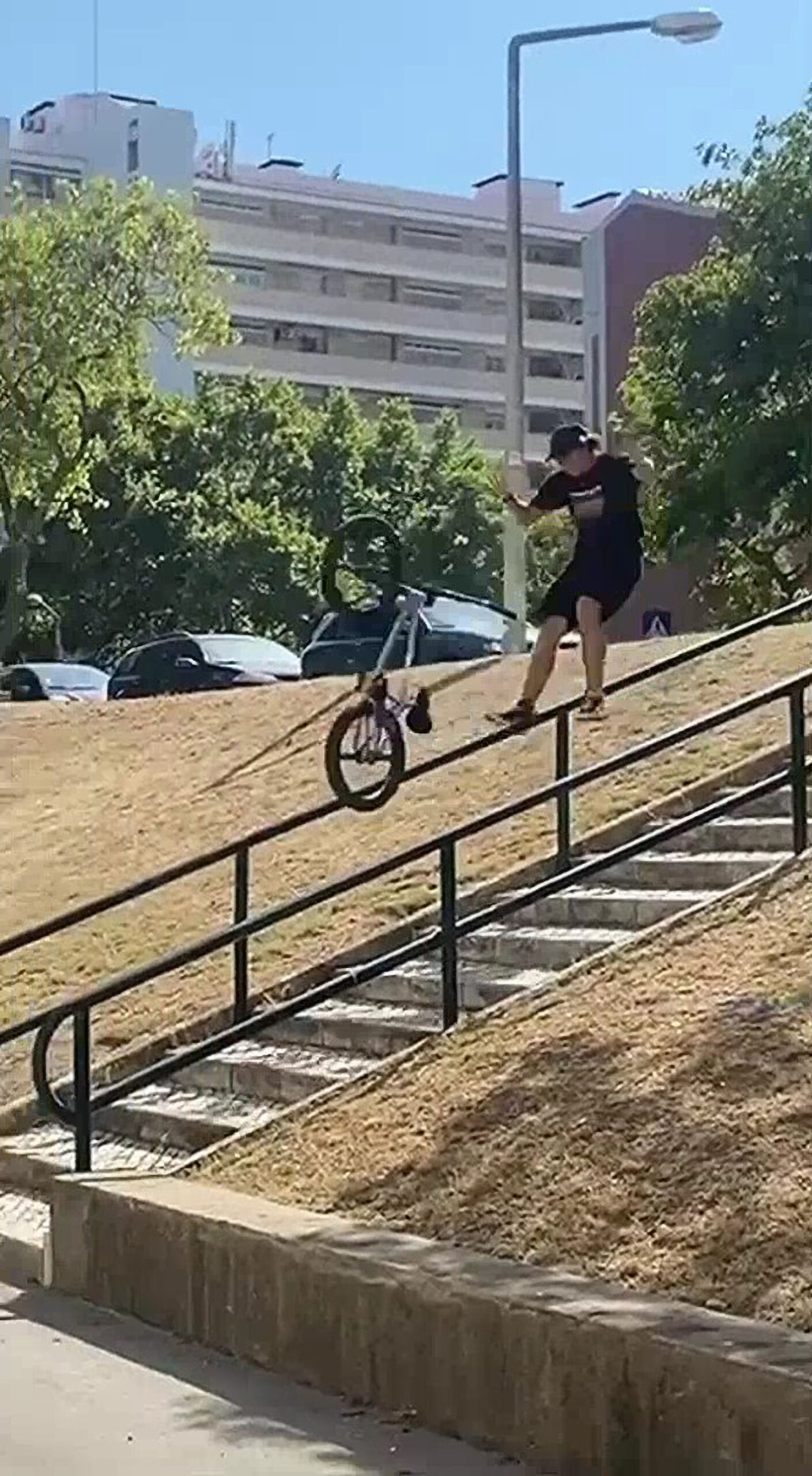 Duarte Abrantes, 17, fails BMX stunt and experiences by far his worst injury, in Lisbon, Portugal on Saturday, July 9, 2022. In spite of the accident, Duarte stated he still had a great time at the BMX jam.  (@kiko_bmx_/Zenger)

This is the moment a teenage BMX rider discovers the very painful side of stunt riding.

The daredevil bicycle motorcross rider was trying to perform a stair rail grind at a meeting of BMX fans in Lisbon, the capital of Portugal.

Duarte Pereira Godinho Palmeiro Abrantes, 17, told Zenger News how it all went wrong for him at the “BMX jam” – when riders get together to watch each other perform tricks.

The video – shot on July 9 and posted to Instagram four days ago – has clocked up nearly 23,000 likes.

The teen, who is in high school but who said he has been riding BMXs for three and a half years, added: “Me and some friends were attempting tricks on the rail and after I landed the first trick that I attempted, that is called a double peg, one of my friends shouted out loud ‘do an ice pick’ and with all of the adrenaline from jumping on the rail and people going crazy I decided to try it.”

The footage shows Duarte successfully landing his bike on the rail.

But it slips out from under him and he lands hard on the handrail catching it between his legs, before he falls headfirst onto the hard tarmac at the bottom of the ramp.

The stunned rider puts his hands to his head and looks in shock at the failed stunt.

Duarte said: “So, when I fell, I was lucky to be tall enough where my balls didn’t hit the rail, but my butt did, and then I got ejected forward, hit the left side of my body on top of the rail that made me spin, the spin was stopped by my leg hitting under the rail extremely hard, then my back in a curb between the road and the grass around the rail and after my head on the ground.

“I was not really badly injured, I got super lucky, I got a little scratch on my back, my head was a bit swollen for a few days but my leg was the thing that hurt more.

“I can only describe it as if someone punched you and the muscle hurts a lot but like one hundred times worse.”

He added that it took him a little over a week to fully heal.

Duarte said: “It was for sure my worst accident, the scariest, but luckily not the one where I was more injured, because like I mentioned before I got lucky not to get seriously injured.”

Duarte added: “After it, the jam was still sick, watching everyone ride and having fun with my friends, despite the fall, I had a great time that day.

“The jam was organized by some friends of mine from @dvc.bmx here in Portugal and all the jams are always super fun.”