The whopping tree is now more than twice the size of their home and Senior says it is making her life a misery.
By Simona Kitanovska August 8, 2022
Facebook
Twitter
Linkedin
Email 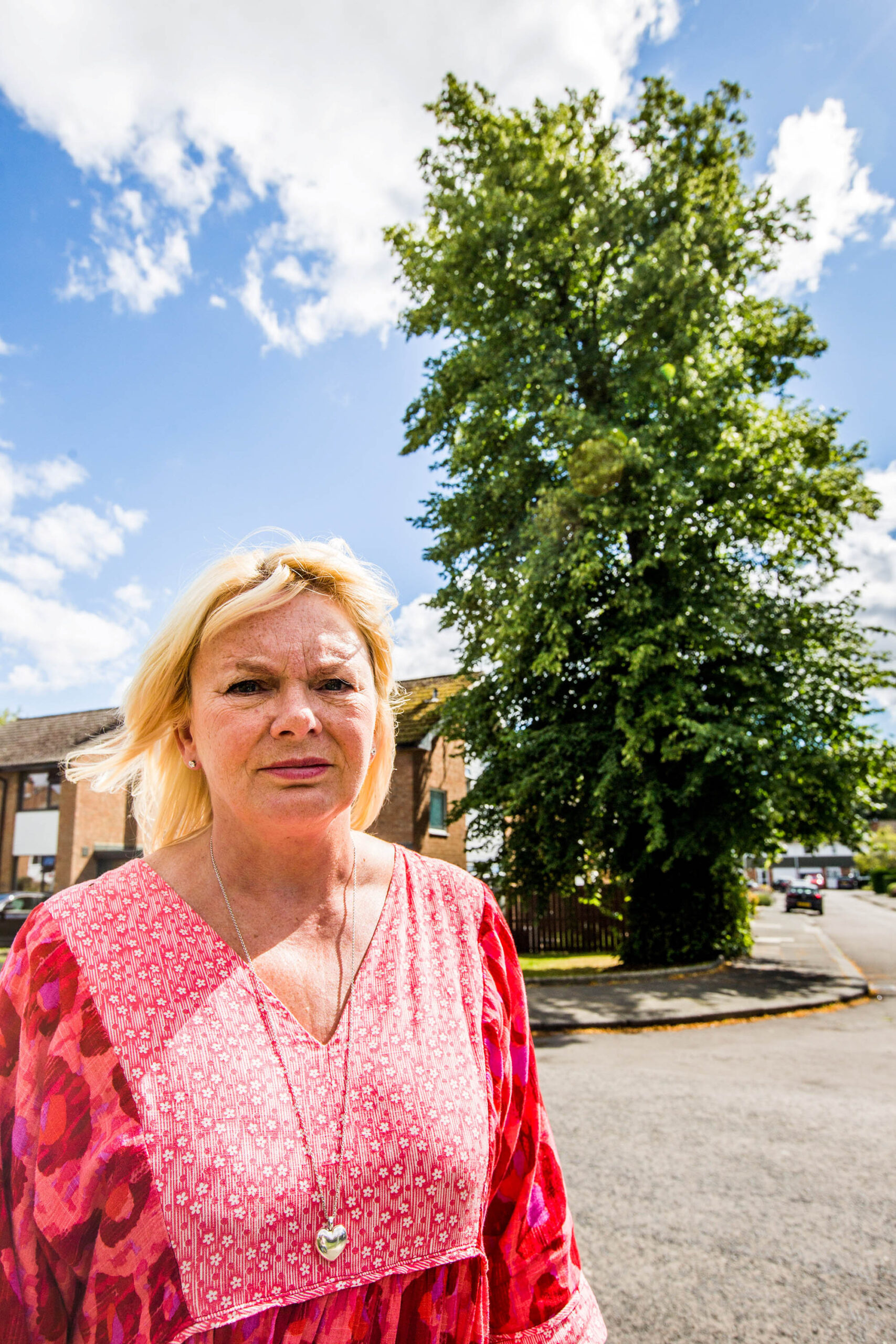 Celia Senior and the 72ft tree which towers over her home in Brompton Walk, in Darlington, in the United Kingdom. Undated photograph. (Stuart Boulton,SWNS/Zenger)

A primary school teacher has been refused permission to prune a giant 72-foot tree which towers over her home – despite it growing out of control in her own garden.

Celia Senior, 57, fears the huge lime tree is at risk of falling on top of her three-bedroom detached property if it’s left untreated.

She says the tree, which is on the couple’s land, was approximately 30 feet tall but it has grown more than 2 feet each year.

The whopping tree is now more than twice the size of their home and Senior says it is making their lives a misery.

She applied to Darlington Borough Council for permission to have it trimmed to around 35 feet and even offered to pay 3,000 pounds ($3,600) to have the work done professionally.

But town hall chiefs refused, saying it was protected by a tree preservation order and any pruning would ruin its appearance.

Senior said: “When we moved into the house we knew about the tree preservation order and liked the tree but it’s just too big now. It simply won’t stop growing.

“I really don’t want the tree cut down, I just want to manage it so it is safe.

“Our gutters are constantly blocked by moss and leaves and our TV and phone signal is badly affected by it.

“During the winter storms I was really worried because I could hear the wind rocking the tree.

“If the tree falls over then it will crush our house and the neighbor’s home too.

“The paving slabs on the other side of the tree have started to be raised which is dangerous for people walking by and I worry about someone getting hurt.”

Last December Senior commissioned an independent arborist to write a report about what should be done about the tree.

The report suggested it underwent a “significant crown reduction and reshape” in order to reduce the risk of the tree being uprooted in high winds.

The report stated: “Common Lime are fast growing trees that will reach a significant height.

“Without suitable management this tree will continue to increase in size, both vertically and laterally.

“Due to its size, more significant structural failure must not be dismissed, and a suitable arboricultural management program is required to reduce this health and safety risk and maintain and ensure the health of the tree.”

Senior said: “Initially we were concerned it might fall onto the house because of the way it is leaning but the arborist said that wasn’t the case but he thought it does need to be managed.

“The arborist recommended that the tree was cut back to around 35 feet which would cost around 3,000 pounds [$3,600] and I would be willing to pay that myself.”

In January this year, the council rejected her application, saying the tree was protected and any pruning would have a “detrimental impact” to its appearance.

Senior filed an appeal with the Planning Inspectorate in a bid to overturn the ruling, but is still waiting for a response.

She added: “I really don’t think the council is being logical. I can’t understand their objection because it will look a lot nicer in the neighborhood.

“The council wrote to the neighbors and no one had any objections to the tree being pruned. People have even been saying it’s about time it’s done.”

A spokesperson for Darlington Borough Council said: “We can confirm permission was refused for the tree works and we understand the house owner has appealed to the Planning Inspectorate.

“It would not be appropriate to comment while we, like the householder, await the outcome of the appeal.”

A refusal notice issued by the council stated the tree was in a “reasonable form and condition”.

It said: “Without any satisfactory justification, the proposed crown lift and associated pruning would result in a loss of natural form to a protected tree in acceptable condition with no safety concerns, furthermore the application has not provided any structural reasons for the proposed work.”

«Previous Post
Small Cars Firm Has Created A $120,000 Mini Ferrari That Can Hit 50 Miles Per Hour»Next Post
A Community Land Buyout Is Set To Double In Size