Man Who Can Taste, Smell And Feel Words Says He’d Never Date A Kirsty Because It Smells Of Urine 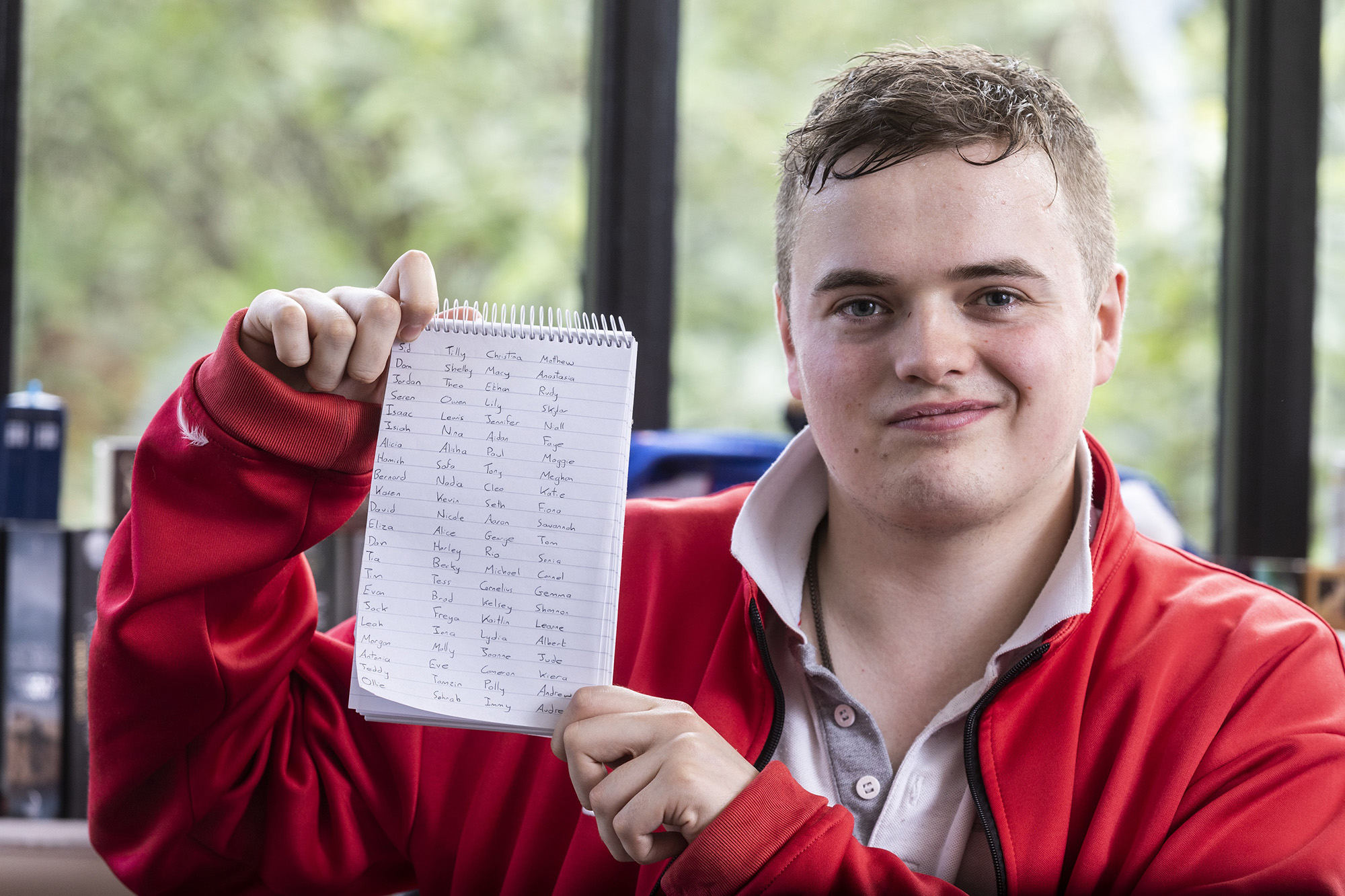 Henry holds a list of names from TikTok in an undated photo. Henry has been asking his subscribers to comment their names so he can see what their names taste or smell like. (Lee McLean,SWNS/Zenger)

Meet the man with a rare condition who can taste, smell and feel words – who reveals he’d never date a Kirsty because the name smells of urine.

Henry Gray, 23, has always been able to taste, smell or have a feeling associated with words for as long as he can remember.

He discovered he had lexical-gustatory synaesthesia in 2009 – after his parents and teachers picked up on him commenting on the tastes for his classmate’s names.

Synaesthesia is a neurological condition that results in the joining or merging of senses that aren’t normally connected – those affected can often taste or smell when hearing, speaking, reading or thinking about words.

For Gray the name Boris Johnson tastes like ‘squishing a hard-shelled beetle with his foot’ and Harry Styles is like ‘hair sticking up like telephone wires’.

He also says Donald Trump is like a ‘deflating rubber duck’.

Despite his condition, Gray insists that most of the time the feelings are background noise but would struggle to date or be close friends with someone with a name he really disliked.

Gray, a barman, from Newcastle, located in northeast England, in the United Kingdom, said: “I’ve always associated words and names with tastes, smells and feelings – it’s all I’ve ever known.

“To me, Kate Middleton is vaguely like jaggedly cutting cloth with a knife in a church and I can hear it.

“Cameron Diaz is like a sparkly disco ball slowly rotating and Jennifer Lawrence is like sniffing the inside of a shoe.

“One of the worst names for me is Kirsty which is the faint smell of urine.

“I’m not sure I could be close friends with or date a Kirsty.

“It’s hard but I do judge people based on their taste or smell with their name.

“It’s always strongest when I first hear a name or am introduced to someone, but I can normally tune it out in day-to-day life.

“But at university when I moved into halls I was in a flat with a Duncan, Kirsty and Elijah.

“I had to change accommodation because they’re some of the worst names- Ducan is like a bird dipped in smoky bacon crisps, Kirsty is a urine smell and Elijah is like licking an eyeball.

“I couldn’t form a friendship with them or live with them so I changed halls.”

Gray had assumed everyone was able to taste or smell words until his parents and teachers pulled him up on his comments on classmates’ names.

“I would say things like Lucy is like a big red lollipop when they called her name out in the register and everyone would look at me confused,” he said.

“Most of the time I quite like having synaesthesia and it doesn’t get in the way.

“I’m a bartender at a pub so whenever I look at people’s ID I get a strong sense of the taste and smell.

“Sometimes it could be an image or feeling – like Leanne is a rose leaning on a window.

“The name Francessca is one of my favorites and is silky warm chocolate coffee.”

Henry finds that he often gets the feeling of the word strongly when he first meets someone and can then block it out from then.

The condition mainly affects him with names but other words such as ‘off’ has the smell of rotting and ‘because’ which is like a split wooden clothes peg.

“I love the name Alice which is sliced apples and my sister’s name,” he said.

“One of the worst is Ian.

Here Gray lists some of the best and worst and names according to what they taste and smell like to him.

Worst female names
Kirsty – Faint urine smell
Mary – A pile of unwashed pink bed sheets faintly smelling of damp
Kate – The sensation of burning myself on ice, like falling over on an ice rink and scraping your skin on dry ice
Natalie – Like broken wooden splinters in my mouth
Gertrude – Tastes like when you swallow back your own sick
Daisy – Sickly sweet butter that’s been left out in the sun and it’s turned orange
Arabella – A long smelly sock
Danika – Sharp segments of ready salted fries lodged in my throat
Vicky – Like biting into shattered glass.
Brittany – Sensation of having my hair caught in something and pulled

Worst male names:
Harrison – It’s like an itch on my body that I can’t scratch, it’s everywhere and nowhere – I don’t even like saying ‘Harrison’
Elijah – Like licking an eyeball – makes my skin crawl to say it
Rupert – A beer burp
Brad – The sensation of rope burn
Dylan – A toilet seat
Braydon – Genuinely provokes horse manure smeared on a wooden wall
Teddy – Beige unwashed settee covers
Hafsah – Feels like running my fingers through an old person’s greasy thin hair
Ian – A horrible name! It’s like having a sticky, blocked ear, all gammy and waxy – I guess like the sensation of earache
Warren – Feels like heartburn

Celebrity names:
Boris Johnson – Is like squishing a hard-shelled beetle with a foot
Jeremy Corbyn – Feels like soft bum-fluff hair on a young man’s chin and cheeks
Donald Trump – Is a rubber duck flattened, letting out air as it deflates.
Kate Middleton – Is vaguely like jaggedly cutting cloth with a knife in a church
Cameron Diaz – Is like a sparkly disco ball slowly rotating
Timothee Chalamet – Is a warm bowl of sugary Sugar Puffs
Emma Watson – Is like a tiny pebble dropping into a puddle and it ripples
Matthew McConaughey – Is like choking on a really smoky cigarette
Jennifer Lawrence – Is like sniffing inside of a shoe
Viola Davis – Is like pouring scintillating water from one pretty glass vase into another
Harry Styles – Is hair sticking up like telephone wires
Philip Schofield – Really smoky
Holly Willoughby – Being something like a hopping kangaroo
Kim Kardashian – Is vaguely kind of like quickly ruffling handkerchiefs around in a hand