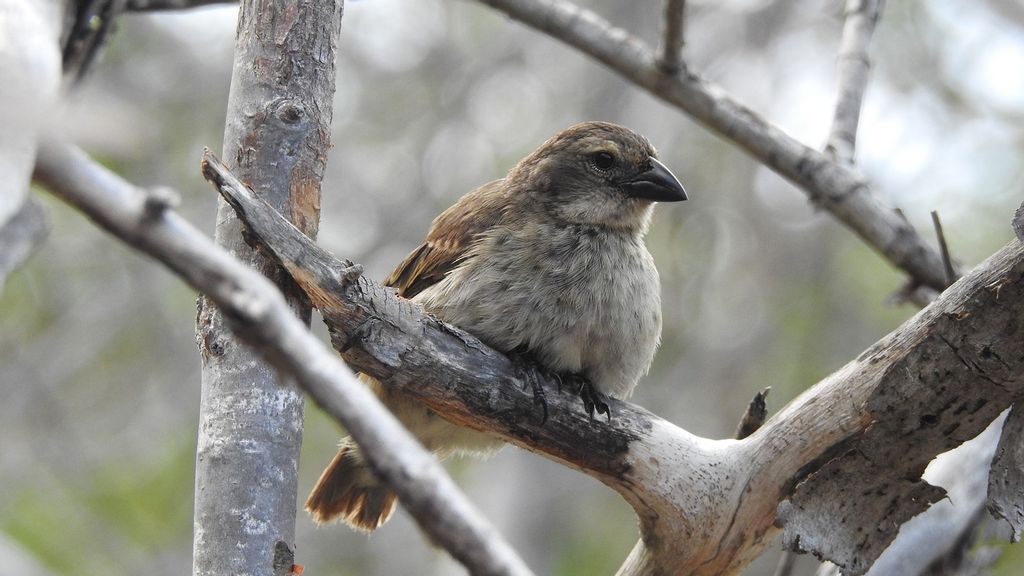 A mangrove finch (Camarhynchus heliobates) in an undated photo. The bird is a part of the efforts for conservation of the mangrove finch in Puerto Ayora, Ecuador.  ( Charles Darwin Foundation/Zenger)

These critically-endangered birds are making a comeback in the Galapagos Islands.

Experts from the Charles Darwin Foundation and the Galapagos National Park Directorate who formed part of The Mangrove Finch Project camped out in a remote region of Isabela Island for nine weeks to carry out annual conservation efforts.

During this time, they found twelve breeding pairs of the mangrove finch – Camarhynchus heliobates – a bird that is endemic to the archipelago off the coast of Ecuador and forms part of a group of birds commonly referred to as ‘Darwin’s finches.’

This is according to a statement from the foundation dated August 2 and obtained by Zenger News.

Their nests were found perched on the tips of extremely fine branches more than 60 feet high on top of a series of mangrove trees.

Junior researcher Ibeth Alarcon is quoted in the statement from the foundation as saying: “In this 2022 field season, we documented twelve breeding pairs of the mangrove finch and saw the successful exit of four chicks from two nests.”

The mangrove finch has extremely specific habitat specifications and is the most threatened species on the islands, with an estimated 100 individuals remaining on the 74 acres of practically untouched mangrove territory on the northwest coast of Isabela.

The project has carried out efforts to conserve the endangered species since 2007, which have included the monitoring of an invasive rat population that was previously introduced.

The team chose to focus on protecting finch chicks in their natural habitat this year while working to minimize the effect of avian vampire flies – Philornis downsi – and their larvae on mangrove finch nests to ensure that a greater number of chicks learn how to fly.

During the season, they found 25 nests and placed insecticide at the bases of 15 of them to lessen the impact of the flies who lay eggs in the birds’ nests and whose larvae become parasites that feed on the blood and tissue of the chicks.

They also controlled the rat population by placing poison in traps to decrease the risk of egg predation.

Project leader Francesca Cunninghame said: “We can confirm that two individuals that left treated nests in 2018 and 2019 were nesting in 2022, demonstrating that this technique can increase the population, which is currently so restricted and where each bird is very valuable.”

The results show that their efforts, combined with the long-life expectancy and high annual survival rates of the birds could create the perfect conditions for breeding pairs in the upcoming years.

The Galapagos archipelago was declared a UNESCO world heritage site in 1978 and was visited by Charles Darwin in 1835, whose observation of species on the islands led to his theory of evolution.

«Previous Post
Vet Divides People’s Opinions After Sharing Things She Will Never Do For Her Own Dog»Next Post
Man Who Can Taste, Smell And Feel Words Says He’d Never Date A Kirsty Because It Smells Of Urine