The three youngsters are considered triplets as they were conceived on the same day - and at the same time.
By Simona Kitanovska August 8, 2022
Facebook
Twitter
Linkedin
Email 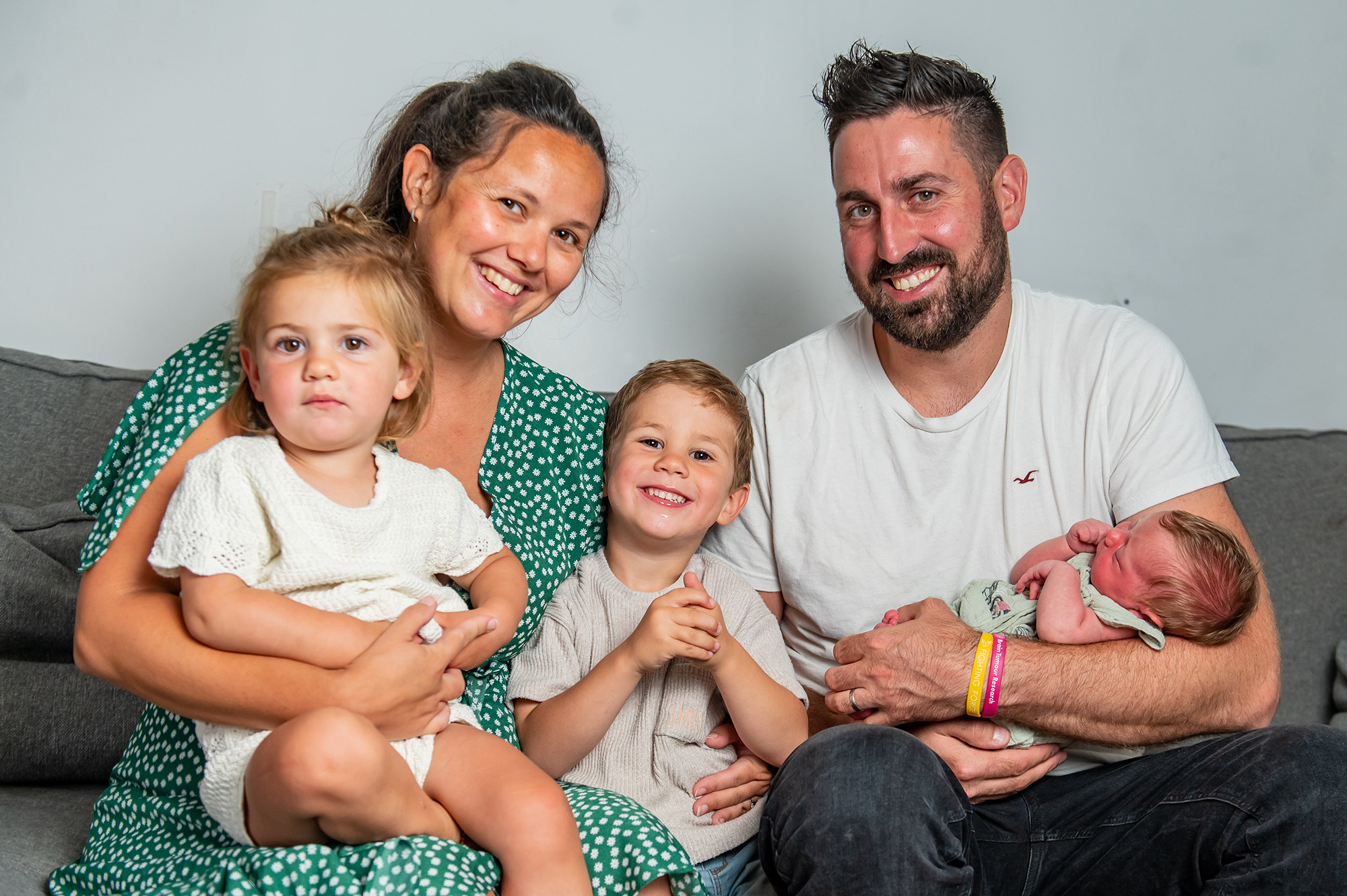 Karen and James Marks with Isabella 1, Cameron, 3, and Gabriella, 1 month at their home in Wilstock Village, Bridgewater, July 31 2022 . (Adam Hughes,SWNS,Zenger)

A couple have welcomed a third baby in set of IVF triplets – each born two years apart.

Karen and James Marks had their first child, Cameron, four years ago, followed by their second child, Isabella, two years ago.

And they have finally welcomed their most recent child, Gabriella, last month.

The three youngsters are considered triplets as they were conceived on the same day – and at the same time – through IVF, from the same batch of embryos.

With three children at home, Karen, 35, and James, 37, now have their hands full but feel like the luckiest pair in the world after their long journey to welcoming their triplets.

Karen, who lives with company director James and their three kids in Taunton, Somerset, in the United Kingdom, said: “It feels so great to have all three of our children now, we feel so incredibly lucky.

“Some people go through IVF and sadly don’t even get to have one baby, and we’ve managed to have three, so we just feel so lucky.

“Gabi was our last embryo, so she’s our last baby now. I knew I wasn’t done before Gabi, so I told my husband if it didn’t work, then we better get saving so we could have another one!

“I feel complete now, I’m so happy. My heart is very full.”

The couple, who married in 2014, feared they might never have a child of their own after Karen failed to get pregnant and was diagnosed with fertility issues.

Karen said: “We tried for a year to conceive naturally and nothing happened, so we went to the GP and they ran some tests.

“There’s no specific reason. I don’t ovulate regularly so that’s the main thing, but other than that, there’s no reason – we don’t have any conditions.

“We had five embryos made up. We’ve lost two – I miscarried one in 2019, and then one in September last year, a month before we fell pregnant with Gabi.”

Karen was given funding for one round of IVF on the NHS in 2017 at the Bristol Center for Reproductive Medicine which proved successful and she gave birth to Cameron on September 1, 2018.

Throughout her IVF journey, Karen sadly miscarried twice – once in 2019 and a second time in 2021 – and feared losing baby Gabi after experiencing bleeding early on and then getting sick with COVID late last year.

Despite Karen losing half a stone during a difficult week of battling COVID, baby Gabi stayed strong and finally joined her family last month, weighing 7 pounds and 5.5 ounces.

After a long journey to motherhood, Karen said she never hesitates to tell people her children are IVF babies and hopes her experience will encourage others to try IVF if struggling to fall pregnant.

She added: “Infertility never leaves you. Pregnancy announcements can still be painful, especially when someone has seemingly conceived easily.

“It’s a battle and a journey, and while part of me believes there’s a reason we had to go through it, we’ve met so many wonderful people along the way.

“If you’ve exhausted all other options, then crack on and go for it. IVF is fine. Don’t put it off or avoid it. It’s the most likely fertility treatment to work, and it did for us.”

After sadly miscarrying twice, Karen and James have now used all of their embryos, making baby Gabi their last child to be born from their IVF cycle.

Karen had once dreamt of four children, but feels incredibly lucky to have had three children and believes her family is ‘complete’ following Gabi’s arrival.

Karen said: “Gabi was our last embryo, so she’s our last baby now.

“I would have loved to have four, but I’m older now as well and my last pregnancy was a difficult one, so I’m pretty set now.

“Cameron and Isabella love her. They’re really cute, even fighting over who gets to hold her, it’s really sweet.

“Cameron is the oldest so he’s doing great, but Isabella is missing her time with Mummy as I was at her beck and call before. There is a bit of mum guilt there, juggling equal time with each of my kids.

“We’re so happy she’s here. It’s surreal, having three children after not thinking you’d have any, but we just feel so incredibly lucky.

“I feel complete now, I’m so happy. It’s chaos, but we’re just so lucky. My heart is full.”