The dad-of-two, who has a rare neurodegenerative disorder, was originally arrested on suspicion of indecent exposure. 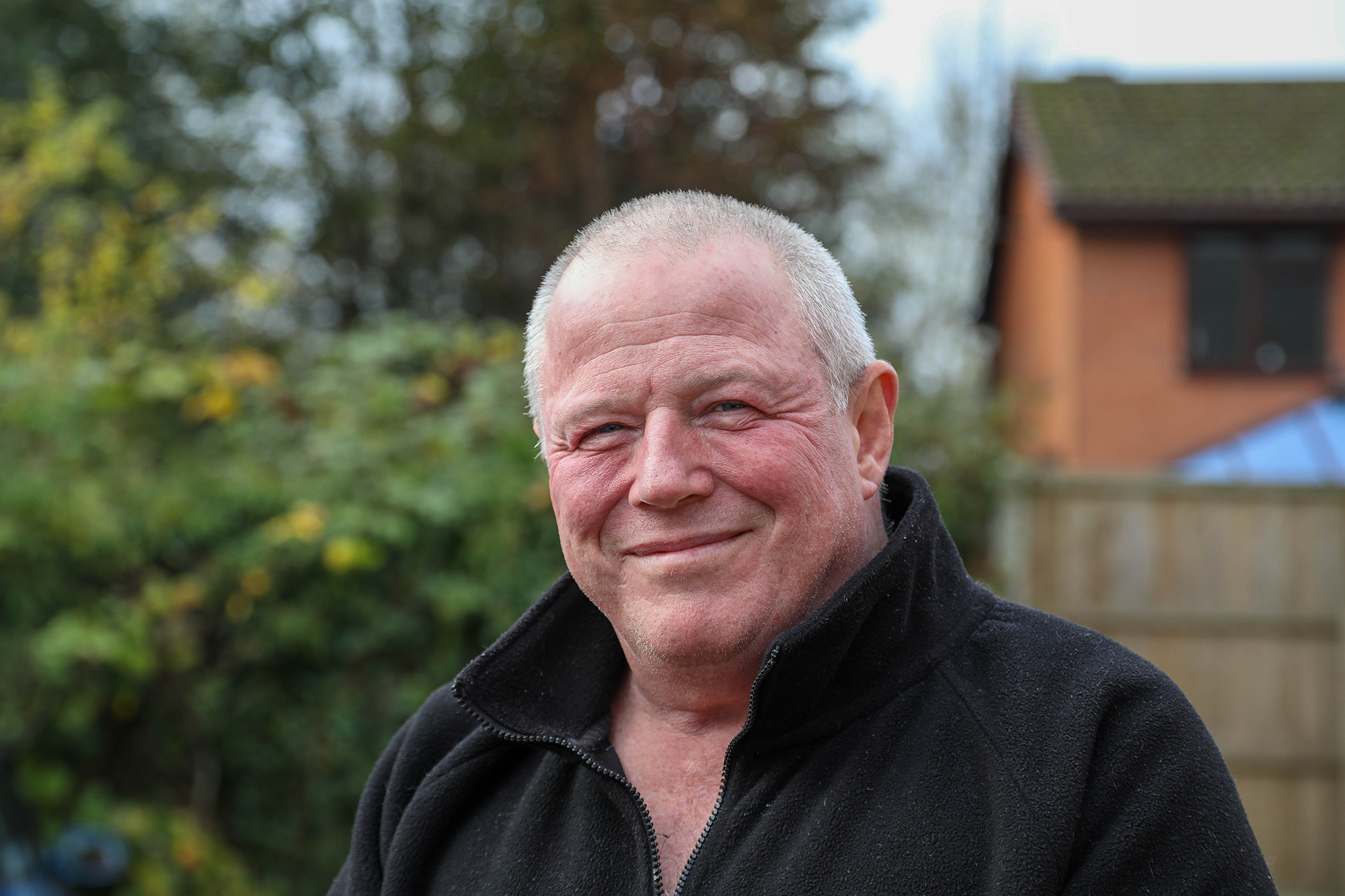 Darrell Meekcom poses in undated photo. The terminally-ill retired university lecturer was arrested by six police officers in his back garden in Kidderminster, England, in November, 2021- for flashing his behind at a speed camera which was on his bucket list. (SWNS/Zenger)

A terminally-ill university lecturer who was arrested after mooning a speed camera as part of his bucket list has gone on trial accused of a public order offense.

Darrell Meekcom, 55, was detained in his back garden by several officers after he flashed his behind at a mobile speed camera van last November.

The dad-of-two, who has a rare neurodegenerative disorder known as multiple system atrophy, was originally arrested on suspicion of indecent exposure and dangerous driving before being bailed.

Meekcom went on trial at Redditch Magistrates Court on Tuesday, August 2, and is accused of obstructing a constable in the execution of duty.

He uses a wheelchair for mobility.

Two further counts he had been facing of using threatening behavior likely to cause harassment, alarm or distress were dropped by prosecutors.

Prosecutor Sarah Hurd said the police had gone to Meekcom’s home in Kidderminster, Worcestershire in the west of England, in the United Kingdom, “for matters the court did not need to know about.”

She said Meekcom had been uncooperative when officers arrived at the address and he had directed abuse towards them before resisting arrest.

One police officer described how Meekcom had branded him a “c**t” and began singing Monty Python’s ‘Always Look On The Bright Side Of Life’ at him.

Opening the case, Hurd said it was only a “short piece of obstruction” but the defendant’s actions had been “unjustified.”

She added: “For matters that you do not need to know about officers attended the defendant’s address at around 12:30 p.m. on November 5.

“They went to investigate an offense and they knock on the door. The defendant answers through a window and says he will not cooperate.

“He does not want to give his name or discuss anything with the officers.

“They make a forced entry to a back gate at the address and arrive at the back garden.

“There is body-cam footage which shows Mr. Meekcom is at the back of his premises, he shouts abuse at the officers, and they then arrest him.

“You hear him say that he refuses to cooperate with the police.

“He is not cooperating with his arms in allowing them to get a grip properly to allow them to apply handcuffs. He then resists arrest at that point.

“It is only once they have gone through the back gate that the defendant’s behavior is going to be looked at. He is resisting.

“He is taken to the ground, it is then that Mr. Meekcom informs them that he has some very serious health conditions.

“He is then led round to the front of the premise where the handcuffs are changed from the front to the back to help him breathe.

“It is a short piece of obstruction and the defendant is unjustified in what he does.”

Giving evidence, Constable Jones said Meekcom had earlier been abusive and added: “He immediately said you c***s, you reckless c***s.

“I was concerned by what he would do next.

“I straight away tell him he’s under arrest for indecent exposure and dangerous driving.

“As I was finishing the caution, I grabbed his left arm to prevent any harm.

“He said ‘you don’t have to grab me.’ He then prevented me from moving his arm to the rear.

“From the very beginning he was doing whatever he could to stop us. We did move the handcuffs as we were listening to him about his health.

“He was singing to me, calling me names, commenting on my hair, making it difficult.

“All I know is the bits he was singing at me were from The Bright Side Of Life.”

A registered nurse, Meekcom previously appeared before a Justice of the Peace wearing a t-shirt showing cartoon character Bart Simpson flashing his bottom at police.

The same image was spray-painted on an underpass near his home by a graffiti artist known as the Scottish Banksy after his story made headlines around the world.

The court heard then that “the prosecution case is that he decided to drop his pants at a speed enforcement van, when officers went over to his home he wouldn’t come out.”

Speaking at the time Meekcom said he was left “gobsmacked” at the “heavy-handed” response and accused West Mercia Police of “outrageous bullying.”

He also hit back at the “trumped-up” charges claiming that officers are “looking for any little thing to get me on”.

He added: “It’s pathetic. What an absolute waste of public funding.

“This is an escalation of what they’ve done. You can’t keep changing it and altering it until you find something that fits.

“What are they going to come up with next. They are literally looking for any little thing to get me on.

“I pulled my trousers down and mooned at a speed camera. That’s all I did.

“They are essentially admitting that there was no offense committed in the first place.

“There is nothing on this charge sheet saying I committed any initial offence whatsoever.

“Why were they kicking living daylights of me in the back garden if there was no offense committed?

“So all this is after they bashed my doors in, causing thousands of pounds worth of damage, for no good reason.

“The police escalated it and I am furious about it. I never thought it would get to this point.

“It is a case of bullying and they are trying to get anything they can possibly get to get me.

“I dread to think how much taxpayer’s money it is costing to do this.

“My health will not, and has not, got better since all this started. The stress of all this has made my health worse. It is unbelievable.”

Meekcom, who lives with his wife Sarah, 36, and their two daughters, previously told how he was left stunned when cops turned up outside their home.

He had dropped his pants at a mobile speed camera van on Stourbridge Road in Kidderminster, in the U.K., while his wife went to buy some bread from a nearby Tesco Express supermarket.

“I was simply gobsmacked. It’s honestly all just baffling.

“I got out the car and flashed my bum. I pulled my trousers up and got back in the car. I didn’t think anything of it.