A collection of snapshots shared online shows drivers going that extra mile to ignore all they know about highway safety. 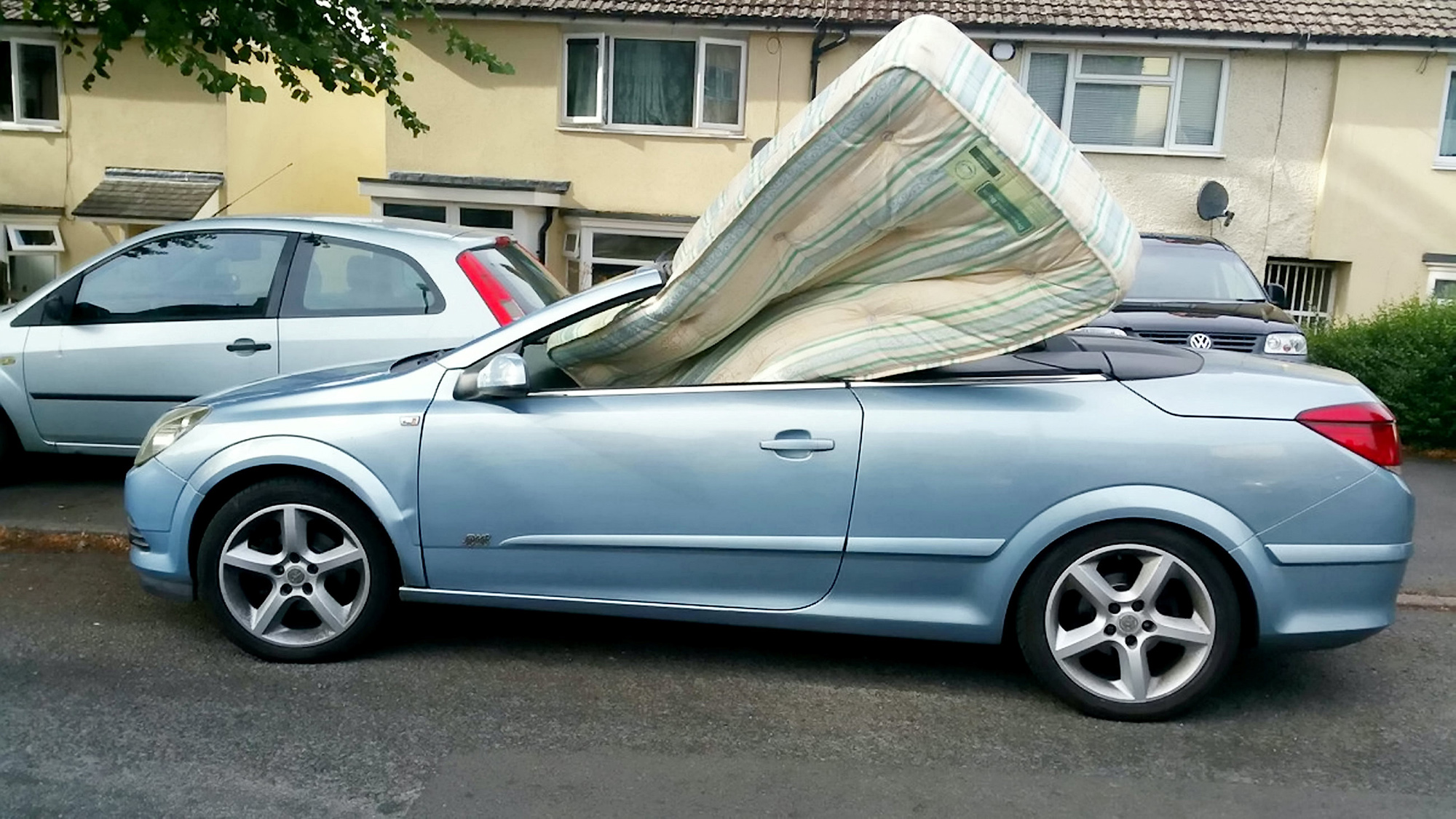 A mattress improperly stuffed in the front seat of a car, in undated photo. Drivers from around the United Kingdom lately have been driving the police crazy. (WMP,SWNS.com/Zenger)

Drivers from around the United Kingdom have been driving everyone – especially the police – crazy.

A mind-boggling collection of snapshots, shared online, show dozy drivers going that extra mile to ignore all they know about highway safety.

Cops were speechless when they pulled over a driver who thought it was okay to travel on a busy road with a huge hay bale in the back of his truck in Redditch, Worcestershire, in England’s Midlands region, in the United Kingdom.

The owner of a flashy convertible Audi needed a lift when the police seized his beloved car, which had a wheel pointing in the wrong direction as he hurtled down the M5 highway that links the Midlands to England’s Southwest.

Another Audi driver was stopped on the same highway with a stack of wooden panels piled precariously on his roof that were secured by flimsy ropes.

A thirsty motorist was hauled over in the busy city of Birmingham after he was caught on camera holding a mobile phone in one hand and a cup of tea in the other.

A driver of a compact Vauxhall Astra was stopped after the police saw sparks coming from his car as he traveled at 60 miles per hour through the county of Staffordshire on his metal wheel rims.

Meanwhile, cops were stunned when they spotted a scrap metal dealer in North Tyneside near Scotland who had an entire Volvo car strapped onto the back of his truck.

Another driver literally went off the rails when he was filmed driving through a railway station in Birmingham.

Police officers were not favorably impressed with a prankster in Ironbridge, Shropsshire, near Wales, who had a bumper sticker which read: ‘I’m not drunk, just avoiding potholes’ when he was caught driving over the alcohol limit and with a wheel missing.

Another drunk motorist who apparently couldn’t count his wheels was stopped by police in Leeds in northern England after driving his Audi to the shops on just three tires.

An Uber driver took it a step too far when a passenger held a ladder out of the window while being driven to their destination in Walsall, England.

An Uber Eats rider took fast-food too literally when he was snapped cycling along the busy M5 highway with a bag of hot food on his back.

A dozy convertible driver in south Birmingham was given a warning for stuffing a single mattress into the front seat of a sporty soft-top car.

A scooter rider needed his head examined for whizzing along a main road in Nottingham in England’s East Midlands with a wicker chair balanced on the handlebars of his bike.

Another two-wheeled driver was caught standing up on his motorbike with no hands as he hurtled down the M6 highway.