The lost and dehydrated young imperial eagle was spotted as it struggled to fly near the Spanish capital Madrid. 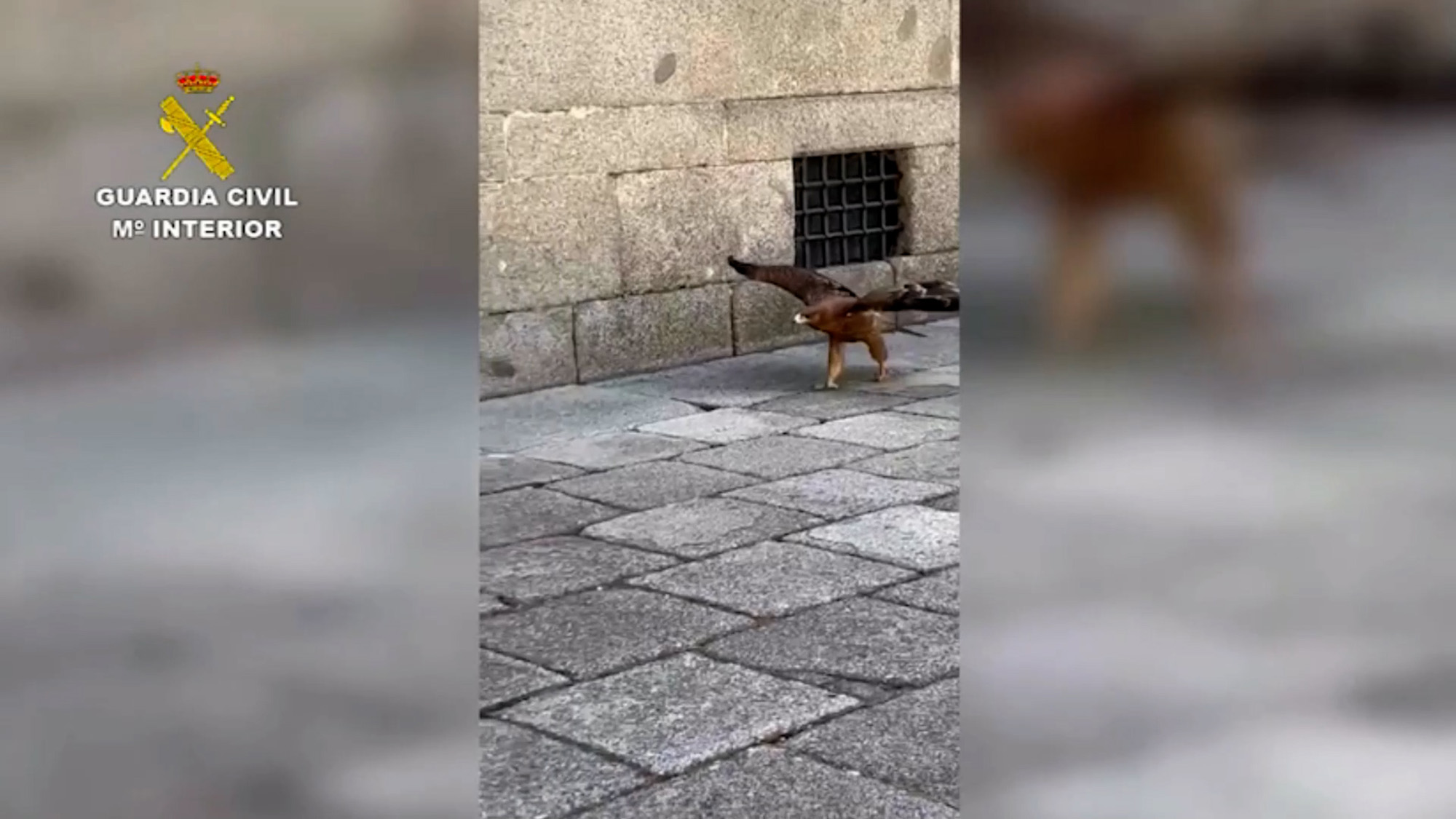 The eagle chick walks in the middle of the street of El Escorial, Madrid, Spain, on July 29, 2022. The animal was finally rescued. (Zenger)

This is the moment one of the rarest birds of prey in the world is rescued by policemen from a royal palace.

The lost and dehydrated young imperial eagle (Aquila adalberti) was spotted as it struggled to fly at the Escorial Royal Monastery near the Spanish capital Madrid.

In a video, the bird of prey could be seen bounding along an exterior wall in the courtyard of the somber building, apparently trying to take flight.

Royal officials called for help as the juvenile bird seemed unable to leave the ancient retreat, once home to Spain’s kings.

It was saved when officers from a wildlife unit of the Civil Guard stepped in and captured the bird on July 29.

Footage of the rescue shows that after dropping a blanket over its head, the officers were able to put the bird in a transporter box.

Spanish police released an advisory, stating: “The animal was finally transferred to the Wildlife Recovery Center in the town of Tres Cantos, where it is recovering favorably.”

Ministry of Agriculture official Luis Gonzalez said: “The first records of Spanish imperial eagles are from the Late Pleistocene and Early Holocene in the eastern Iberian Peninsula, and their distribution seems to have been limited to the distribution areas of Mediterranean vegetation and the European rabbit.”

The Spanish imperial eagle is native to the plains, marshes, and hilly regions of central Spain as well as mountain ranges that form part of the Central System mountain range in Portugal.

In captivity, these birds can live for up to 41 years, while they live for about 20 years in the wild.

The Spanish imperial eagle is currently listed as vulnerable on the endangered species list.

Findings revealed by Bird Life International – a registered charity aimed at conserving birds and their habitats – explain that while most of poisonings and electrocutions are accidental, they are the most frequent causes of mortality, with 40 percent of cases linked to livestock protection.

Eagles have long featured prominently in Spanish heraldry and ornaments. The Romans, who conquered Spain in the 1st century B.C. were known to use effigies of eagles as symbols of their martial prowess, while the later Roman and Hapsburg Empire featured double-headed eagles on buildings and flags.

The Royal Monastery of St. Lawrence at El Esocrial was built by King Philip II of Spain in the Guadarrama Mountains to commemorate his 1557 victory at the Battle of St. Quentin against King Henry II of France.

El Escorial is situated at the foot of Mount Abantos in the Sierra de Guadarrama range. Intended as the burial place for his parents, Charles I and Isabella of Portugal, himself, and his descendants, it was where Philip spent the last years of his life.

El Escorial is the largest Renaissance-era building in Europe and is a major tourist attraction.