He underwent emergency surgery to have two stents fitted to unblock the arteries around his heart.
By Simona Kitanovska August 5, 2022
Facebook
Twitter
Linkedin
Email 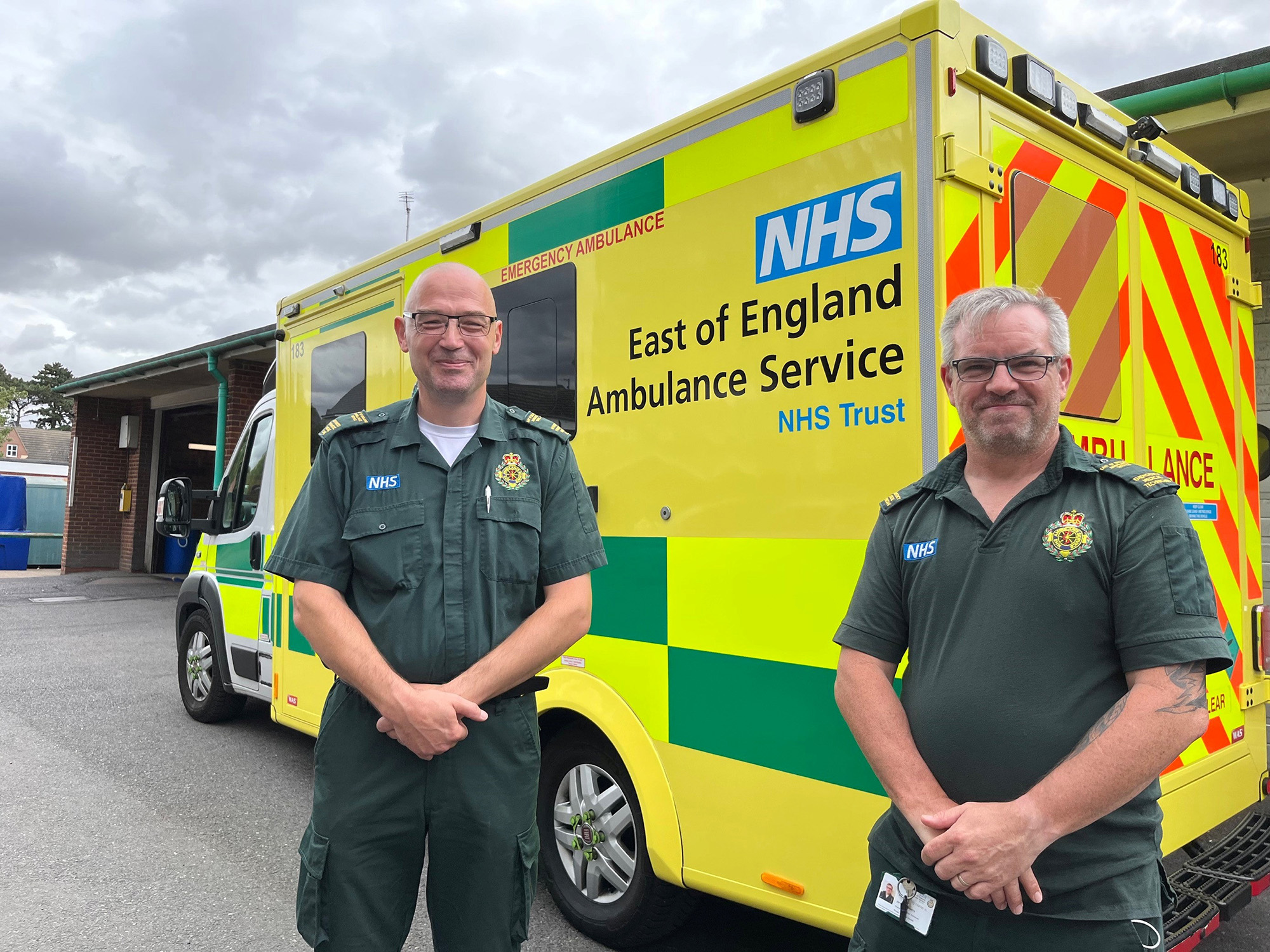 Shaun & Jeremy. A paramedic treating a patient having a cardiac arrest had a heart attack himself - and was saved by colleagues, in undated photo. (NHS East of England Ambulance, SWNS/Zenger)

A paramedic treating a patient having a cardiac arrest had a heart attack himself – and was saved by colleagues.

But the East of England Ambulance Service worker suddenly felt ‘excruciating’ pain at the house in Stewartby, Bedfordshire, in the United Kingdom.

His teammates realized what was happening and some continued to shock the patient while others carried out an ECG on Williams.

They discovered he was having a heart attack and then worked side by side to manage both casualties and transfer them to separate hospitals.

Williams underwent emergency surgery to have two stents fitted to unblock the arteries around his heart.

Now he and the original patient are both making full recoveries.

Williams, of Kempston, England, in the U.K., said: “It was one of those things which never, ever happens.

”I can laugh about it now because I’m glad to be here, but if it hadn’t been for my colleagues it would be a completely different story.

“We knew it was a bad job when we arrived because the patient’s condition was so serious, but it just seemed to get worse from there.

“I’ve come off a motorbike at high speed so know what pain is, but have never felt anything like I did on that day.

”It was so excruciating that the crew couldn’t dry my chest to attach the ECG. But once they did get a reading, they knew what they had to do and transferred me straight to the specialist hospital at Lister where I had two stents fitted.

“I now feel fine, but shudder to think what the outcome would be if this had happened on a country road in the middle of nowhere with no one else around.

”But for me, everything fell into place – if I was going to have a heart attack, I couldn’t have had it with better people around me.

“I will be forever grateful for the amazing team effort which helped to save two lives that day.”

Shaun Whittington, an advanced paramedic in urgent care, led the incidents and described the shift as one he will never forget.

“Jeremy’s heart rate and blood pressure dropped dramatically while we were on the way to hospital and at one point I thought he was going to go into cardiac arrest,” said Whittington.

“I don’t know who was sweating more – him or me.

“We waited at the Lister while he had the stent fitted and within just 40 minutes he was a completely different person.

”When we arrived he looked like he was about to die, but after the surgery it was like he had just come home from a holiday.

“I’ve been in this job for 22 years and have never heard of anything like this happening before, and really hope it never happens again.

”The fact that Jeremy and the patient have both recovered is a testament to the skills and dedication of the team on scene on the day, who worked together brilliantly to manage two very challenging incidents.”