Police eventually catch up with and arrest the rider, who appears to have fallen off his moped in the chase.
By James King August 5, 2022
Facebook
Twitter
Linkedin
Email 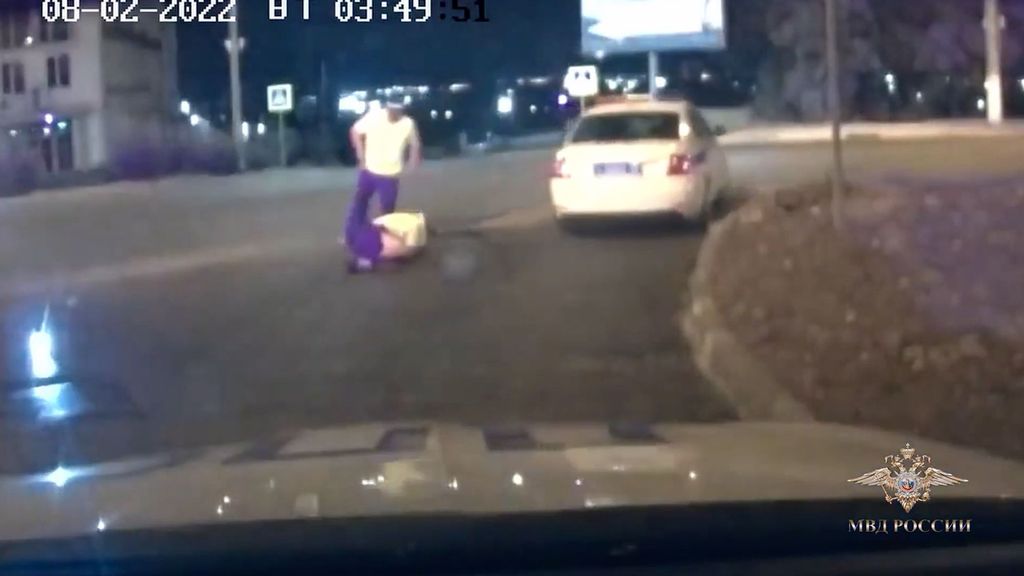 Picture shows a bike used in a crime, in an undated photo. A drunk teenager ran over a traffic police inspector in Sevastopol, Russia, on Tuesday, Aug. 2, 2022. (MVD RUSSIA/Zenger).

This is the moment a drunk 15-year-old boy rams a traffic cop with his moped before fleeing the crash site.

Police footage of the incident – filmed in Sevastopol, the capital of the Russian-occupied Crimean Peninsula in southern Ukraine, at 4 a.m. on Tuesday, August 2, shows the officer as he is sent flying through the air.

As police try to stop the moped rider, he keeps going and hits one officer on his shin.

The cop summersaults through the air before hitting the ground with a sickening thump.

Police eventually catch up with and arrest the rider, who appears to have fallen off his moped in the chase.

The Investigative Committee of the Russian Federation for the Republic of Crimea and the city of Sevastopol said: “Investigators in Sevastopol are investigating a drunken teenager for riding a moped and hitting a traffic police officer.

“It has been established that today at about 4 a.m. on Khrustalev Street in the Leninsky district of the city of Sevastopol, a traffic police unit patrolling the area tried to stop a moped operated by a teenager with a passenger.

“The rider did not stop at instruction of law enforcement officers and knocked down a police officer in the direction of travel and tried to escape.”

The Investigative Committee said the cop suffered a fractured lower leg in the incident.

The Russian authority said: “The violator was promptly detained shortly afterward on the same street. The injured traffic police officer, who suffered a closed fracture of the lower leg as a result of the incident, was promptly provided with medical assistance. He is currently hospitalized.

“The driver of the moped was a 15-year-old teenager who was riding while intoxicated. His identity, place of residence, and family background have been established.

“At present, employees of the investigative department for the Leninsky district of the city of Sevastopol have inspected the scene of the incident, and are interviewing witnesses and participants in the incident.”

The Russian authority added: “The progress of the check is under the control of the head of the Main Investigation Department of the Investigative Committee of the Russian Federation for the Republic of Crimea and the city of Sevastopol.”

Russia invaded the Crimea peninsula in 2014 and soon after annexed it after claims that residents freely engaged in a referendum to join Russia. Russia threatened a nuclear response in answer to challenges to its authority.

Most member states of the United Nations, with the exception of socialist governments aligned with Russia such as Venezuela, Cuba, and Armenia, do not recognize the annexation.