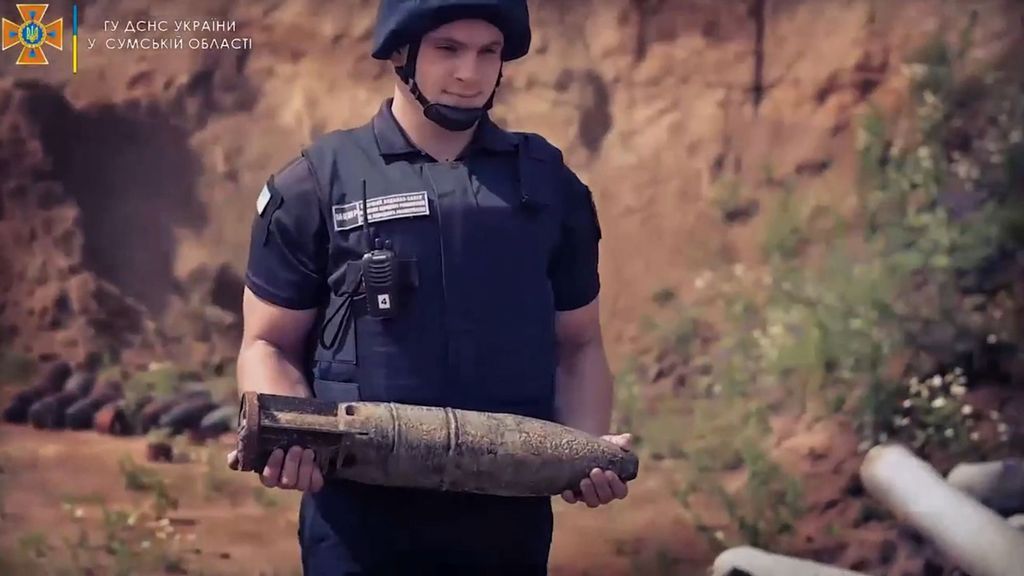 Pyrotechnic of the State Service of Ukraine for Emergency Situations holds explosive Russian ammunition in the village of Bezdryk, Sumy region, Ukraine in an undated photo. Ukrainian pyrotechnic units have already destroyed more than 6,000 explosive objects in the territory of Sumy region. (@MNS.GOV.UA/Zenger)

This footage shows Ukrainian emergency workers clearing their land and waterways of Russian ordnance, unearthing unexploded bombs and finding them at the bottom of their rivers and lakes.

Workers from the State Emergency Services (SES) of Ukraine can be seen unearthing the unexploded Russian ordnance in the Sumy region of north-eastern Ukraine. They asked Ukrainian parents to teach their children to be safe, as the country will no doubt take years to clear off all the unexploded weaponry.

The state capital of Sumy Oblast, also called Sumy, is located on the banks of the Psel River, and SES workers can also be seen diving into the region’s bodies of water with metal detectors and locating ordnance lying at the bottom.

The footage was obtained from the SES of Ukraine and from the Ukrainian Ministry of Internal Affairs, which both released the following statement on Sunday, July 31: “On land and in water: pyrotechnicians of the State Emergency Service are actively freeing Sumy Oblast from the explosive consequences of Russian aggression.

“Since the beginning of the work, the pyrotechnic units of the State Emergency Service have already destroyed more than 6,000 explosive objects in the territory of the region.

“Ammunition is found both on land and in the water areas of reservoirs.

“In addition to explosive items left after the open invasion of Russian troops, the enemy continues to litter our Sumy Oblast with ammunition with daily insidious shelling of border communities.”

The SES of Ukraine also said: “Be careful and teach children safe behavior when detecting explosive and other suspicious items!”

Zenger News contacted the SES of Ukraine for further comment, as well as the Russian Ministry of Defense, but had not received a reply at the time of writing.