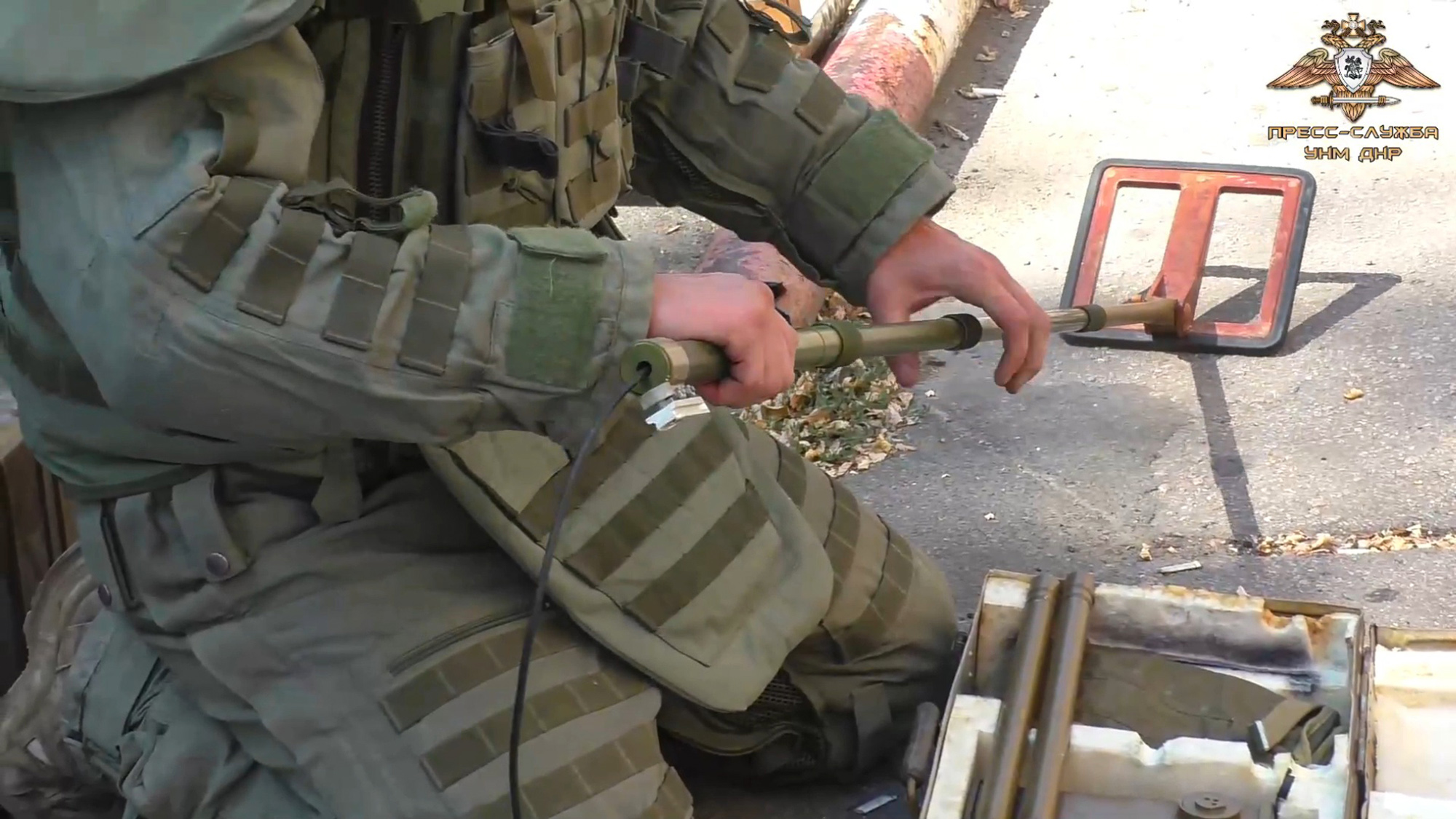 Soldier holds demining device in Donetsk, Ukraine, Sunday, July 31, 2022. Sapper groups of the Ministry of Emergency Situations of the DPR, together with the engineering troops of Russia, demined the central part of the city.(@nm_dnr/Zenger)

Ukrainian officials have accused Russian forces of scattering deadly ‘petal’ mines in Donetsk themselves so that they can then turn around and accuse Ukraine of the deed – while making a show of clearing them away.

Footage put out by the pro-Russian, so-called Donetsk People’s Republic (DPR) purports to show members of its People’s Militia and Russian soldiers in full bomb squad gear clearing the streets of Donetsk of PFM-1 ‘petal’ mines.

The PFM-1 is a scatterable anti-personnel land mine designed by the Soviets and produced by Russia. Both the Ukrainians and the Russians have accused each other of using these mines since the beginning of the Russian invasion. They are also known as Butterfly Mines or Green Parrots.

The mines can be deployed from helicopters, planes and mortars. They then gently glide down to the ground without exploding.

The Russian and DPR forces can be seen in the footage operating a Russian Uran-6 demining drone that appears to be equipped with a roller at the front, designed to safely detonate mines.

But Petro Andryushchenko, an adviser to the Mayor of Mariupol Vadym Boychenko, has accused the Russians and pro-Russian forces of scattering the mines themselves so that they can then accuse Ukraine of the deed before demining the streets of Donetsk.

Andryushchenko said (in Ukrainian): “Russian occupiers and collaborators continue to kill their own population. All week, Russian propagandists have been pushing the agenda of shelling Donetsk with ‘Lepestok’ anti-personnel mines.

“It’s as if the Ukrainian army is doing it (it’s unclear why). Despite the fact that such mines are prohibited by international conventions and are not in service with the [Ukrainian] Armed Forces. However, they have constantly been used by the Russian army throughout the war since 2014.

“Why is this, for the Russians – the answer is quite obvious if you look more broadly. To put petal [mine] hysteria on the calendar.

“Then it strangely coincides with the discussion in the USA of the decision to recognize Russia as a state sponsor of terrorism.

“As soon as there was progress and the announcement that the USA was ready to do it, Donetsk was sown en masse with petal [mines] with the constant support of propagandists.”

He also said: “The idea is clear. Not once again will Ukraine be accused of non-existent crimes. And the counter is to sow doubt in the decision regarding Russia itself. Typical Russian-fascist tactics.

“And in the meantime, the people of Donetsk are suffering from Russian mines. Because Donetsk is not Russia and not Russians for Russia. It’s just cannon fodder and a means of achieving their own goals.”

Andryushchenko also said that the “civilian residents of Donetsk are forced by the occupiers to pick them up off the streets with their own hands. This is Russia and Russian peace. Inhumanity and destruction.”

The accusation was also echoed by Adviser to the Minister of Internal Affairs of Ukraine Anton Gerashchenko, who said: “Throughout the past week, Russian propaganda has been promoting the narrative about the massive use of anti-personnel ‘Petal’ mines in occupied Donetsk by the Armed Forces of Ukraine.

“Details: these mines are prohibited by international conventions and are not in service with the Ukrainian army.

“Adviser to the Mayor of Mariupol Petro Andryushchenko regards such actions of the rashists as a deliberate provocation in anticipation of the U.S. decision to recognize Russia as a state sponsor of terrorism.”

‘Rashist’ is a term that is often used by the Ukrainian forces when referring to the Russian invaders. It is a combination of the words ‘Russia’ and ‘fascist’.

The footage was obtained from the pro-Russian DPR, which also claimed in a statement that its forces were patrolling the streets of its “capital”, the city of Donetsk in eastern Ukraine’s Donetsk region, to detect and neutralize mines.

It also claimed that these alleged mines – none of which can be seen being detonated in the footage it released – were scattered in the city by Ukrainian forces, which it labels “Nazis”.

Some khaki-colored objects that appear to be mines can be seen at one point on a pavement in the footage. The demining drone can then be seen entering being observed by civilians going about their lives before it enters what appears to be a park.

The DPR claimed in its statement, obtained on Sunday, July 31, that “sapper groups of the Ministry of Emergency Situations of the DPR, together with the engineering troops of Russia, are clearing the central part of the city of PFM-1 ‘Lepestoks’, which were fired at the city from cluster munitions”.

The Russian state news agency TASS had claimed on Thursday, July 28, that ambulance workers had found PMF-1 mines after an attack by Ukrainian forces.

The DPR also claimed in the statement: “The Ukrainian Nazis inflicted the most inhumane terrorist attack on the peaceful quarters of the city, at the moment, work on the elimination of mines continues. We ask residents to be extremely careful!”

The DPR claimed that the machine being used to find mines allegedly deployed by Ukraine is a Uran-6, which is a Russian land drone used in demining operations.

We have not been able to independently verify the DPR’s claims or its footage.