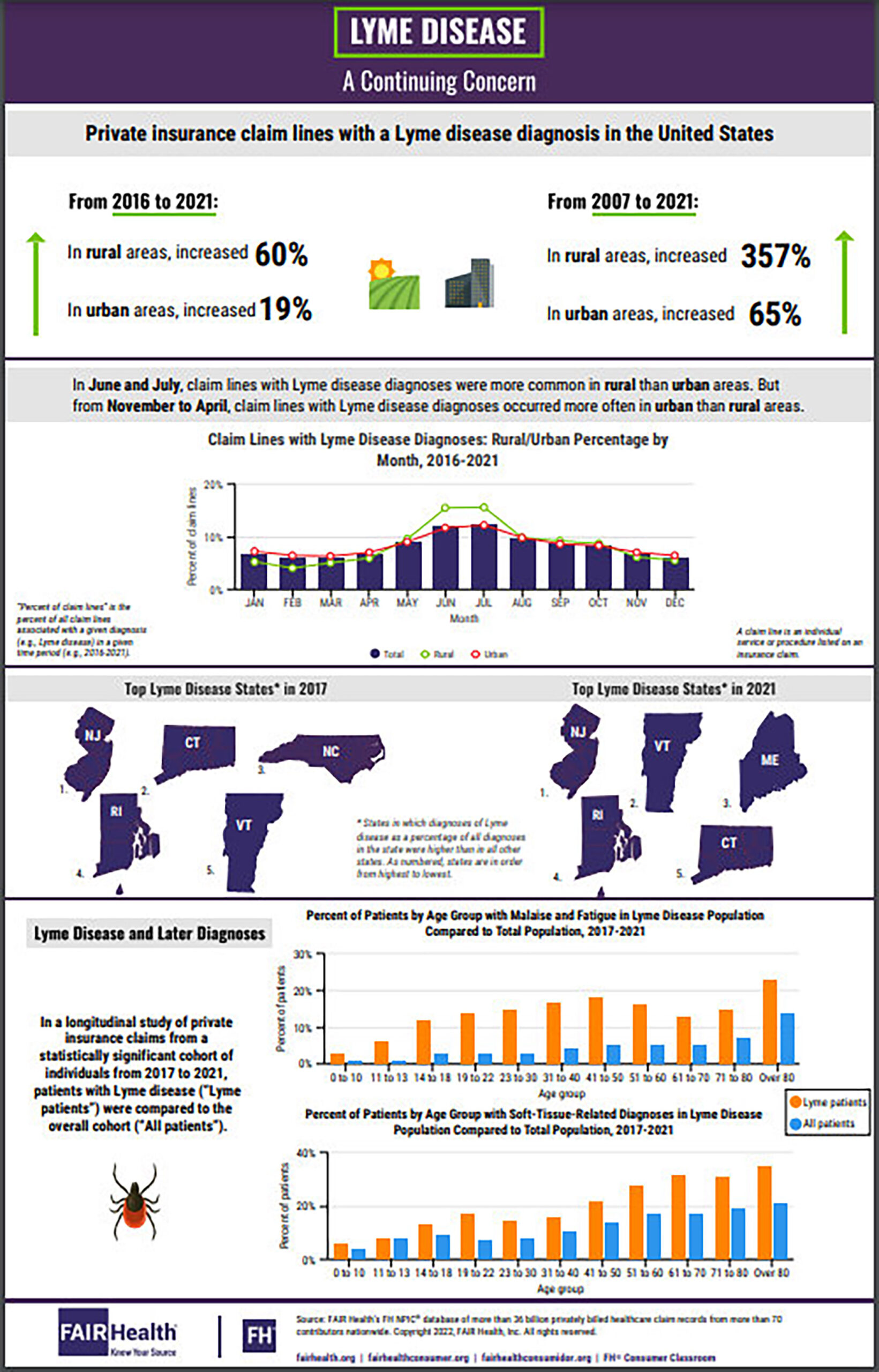 Lyme disease cases have soared almost five-fold in 15 years because of global warming, according to new research.

The potentially-fatal bacterial infection is transmitted by tiny spider-like blood-suckers. Campers and hikers are particularly prone.

An analysis found diagnoses rose 357 percent in rural areas in the United States between 2007 and 2021.

In towns and cities they increased by around two-thirds (65 percent). Similar trends have been observed in the U.K.

Longer summers and warmer winters are to blame, along with animal migration and increased time spent outdoors.

Those over 50, men and those living in rural areas are most vulnerable. Infected ticks can be found across Britain.

It used its database of over 36 billion privately billed healthcare claims in the U.S. to carry out the study.

In the U.K., high-risk areas include grassy and wooded areas in northern and southern England, as well as the Scottish Highlands.

For decades, scientists have been clueless as to exactly how widespread the tick-borne illness really is.

The latest findings add to evidence that it is much more widespread than previously feared.

If left untreated it can lead to serious symptoms affecting the joints, nervous system – and even the heart.

From 2016 to 2021, claims with Lyme disease diagnoses increased 60 percent in rural areas and 19 percent in urban areas – peaking nationally in June and July.

During summer months rural areas, on average, had a greater share of claim lines associated with Lyme disease.

In 2017, the states with the greatest proportion of Lyme disease diagnoses were New Jersey, Connecticut, North Carolina, Rhode Island and Vermont.

Lyme disease has been historically associated with the Northeast and upper Midwest of the U.S.

The emergence of North Carolina as the third-highest hotspot suggested marked expansion.

But by 2021 it had dropped from the list – with the top states New Jersey, Vermont, Maine, Rhode Island and Connecticut.

Lyme disease is treatable with antibiotics. Some patients later develop conditions with long-term symptoms, such as fatigue, muscle and joint pain and cognitive issues.

To identify later diagnoses, the researchers examined a statistically significant cohort of individuals in its private insurance claims database from 2017 to 2021.

They compared the prevalence of certain diagnoses among Lyme patients to all patients in the cohort.

The analysis found diagnoses such as malaise and fatigue and soft-tissue-related issues were more common among Lyme patients.

Across all age groups, patients with Lyme disease were generally more likely to have these apparently associated diagnoses than all patients in the cohort.

“FAIR Health will continue to use its repository of claims data to provide actionable and relevant insights to healthcare stakehZenger News seeking to better understand the ongoing rise of Lyme disease cases.”

It is the third study FAIR Health has conducted on Lyme disease, the first appearing in an infographic released in 2017 and the second in a white paper published in 2019.

In June a study found up to one in 10 people in the U.S. may have had Lyme disease – around 50 million or 9.4 percent of the population.

Globally up to 14.5 percent of people have had the disease – or one in seven – the researchers claimed.

The bacterial infection causes a round rash and can trigger flu-like symptoms but usually gets better with antibiotics within weeks or months.

People are advised to remove ticks safely and as soon as possible using tweezers.
It is not known how many die, although deaths are rare.

Ticks are second only to mosquitoes in terms of the number of harmful microbes they carry.

Some harbor Borrelia burgdorferi sensu lato, the bacteria which is responsible for Lyme disease.

Signs of a long-term illness include severe headaches, facial paralysis and an irregular heartbeat.