The Galapagos land iguana had been completely wiped out on Santiago Island. 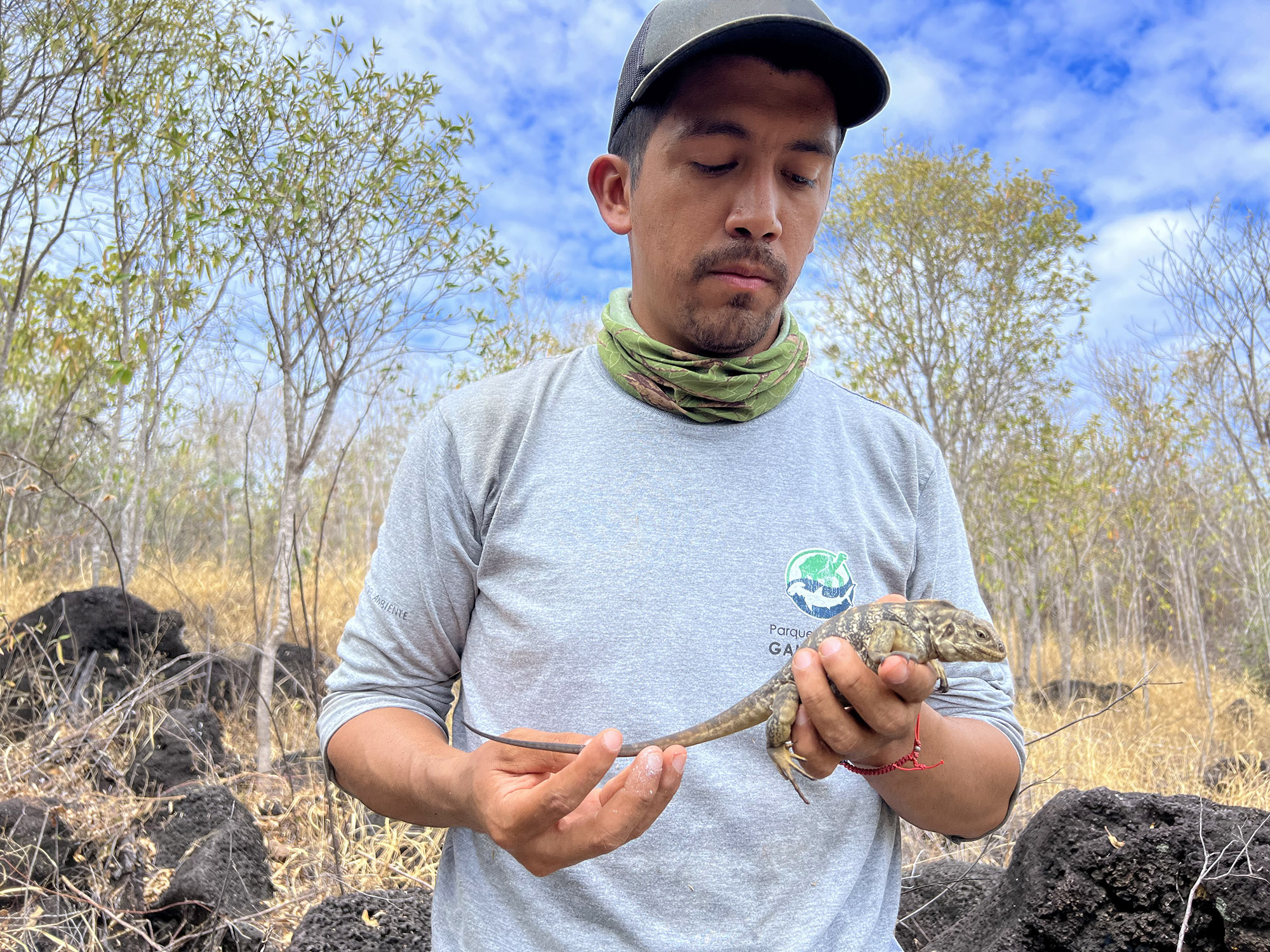 Expert from the Galapagos National Park holds an iguana on Santiago Island, Ecuador, in an undated photo. Experts through monitoring, found new individuals of various ages, which shows that this species is reproducing successfully. (Jean Pierre Cadena/Zenger)

Iguanas extinct from a Galapagos island for generations have been reborn nearly two centuries after they were first recorded by Charles Darwin.

The Galapagos land iguana had been completely wiped out on Santiago Island.

The Galapagos archipelago is located east of South America and is a province of Ecuador.

Listed as vulnerable on the International Union for Conservation of Nature’s (IUCN) Red List of Threatened Species, thousands of iguanas were reintroduced to the island.

Now new images show the lizard is breeding on the island again.

“Experts from the Galapagos National Park and scientific advisers, through monitoring, verified that after almost two centuries the land iguanas of the species Conolophus subcristatus occur again on Santiago Island.

“3,143 of these specimens were reintroduced three years ago with the aim of restoring the island’s ecosystem.

“The team covered about 36 square kilometers and found new individuals of various ages, which shows that this species is reproducing successfully.

“The iguanas were physically evaluated, weight and height measurements were taken, and the new individuals were marked for later identification.”

The director of the Galapagos National Park, Danny Rueda Cordova, said: “187 years later we witness again a healthy population of land iguanas, with adults, juveniles and neonates on Santiago Island.

“This is a major conservation achievement and strengthens our hopes of restoring islands that have been severely affected by introduced species.

“As an environmental authority, we will continue with the implementation of actions that allow us to approach the ecological integrity of the island’s ecosystem.”

And Luis Ortiz-Catedral, head of the expedition, said: “The island has already begun to show positive changes thanks to the distribution of iguanas, as they have opened paths, removed soil and dispersed seeds and other results, such as changes in population dynamics and greater availability of food for others. endemic species such as hawks will be seen in a few more years.”

The statement also said: “The ecological restoration of Santiago Island, one of the largest in the archipelago, began in 2002 with the execution of the ‘Isabella Project,’ for the eradication of feral goats and pigs.

“Over the years, the ecosystem began to recover and offered the necessary conditions to house a population of land iguanas, of the same species as the locally extinct one.

The Park explained that in 1835, Darwin recorded the presence of a large number of land iguanas of different ages on Santiago Island.

But later expeditions carried out by the California Academy of Sciences, in approximately 1903 and 1906, no longer found live specimens on the island.

Galapagos is Spanish for tortoise, which was nearly exterminated by seafarers hunting them for food. Likewise, mariners in years past introduced pigs and goats for food, as well as rats.