Giant Prehistoric Panda Might Have Originated In Eastern Europe

The discovery adds to evidence the charismatic bears did not originate in China – but migrated there. 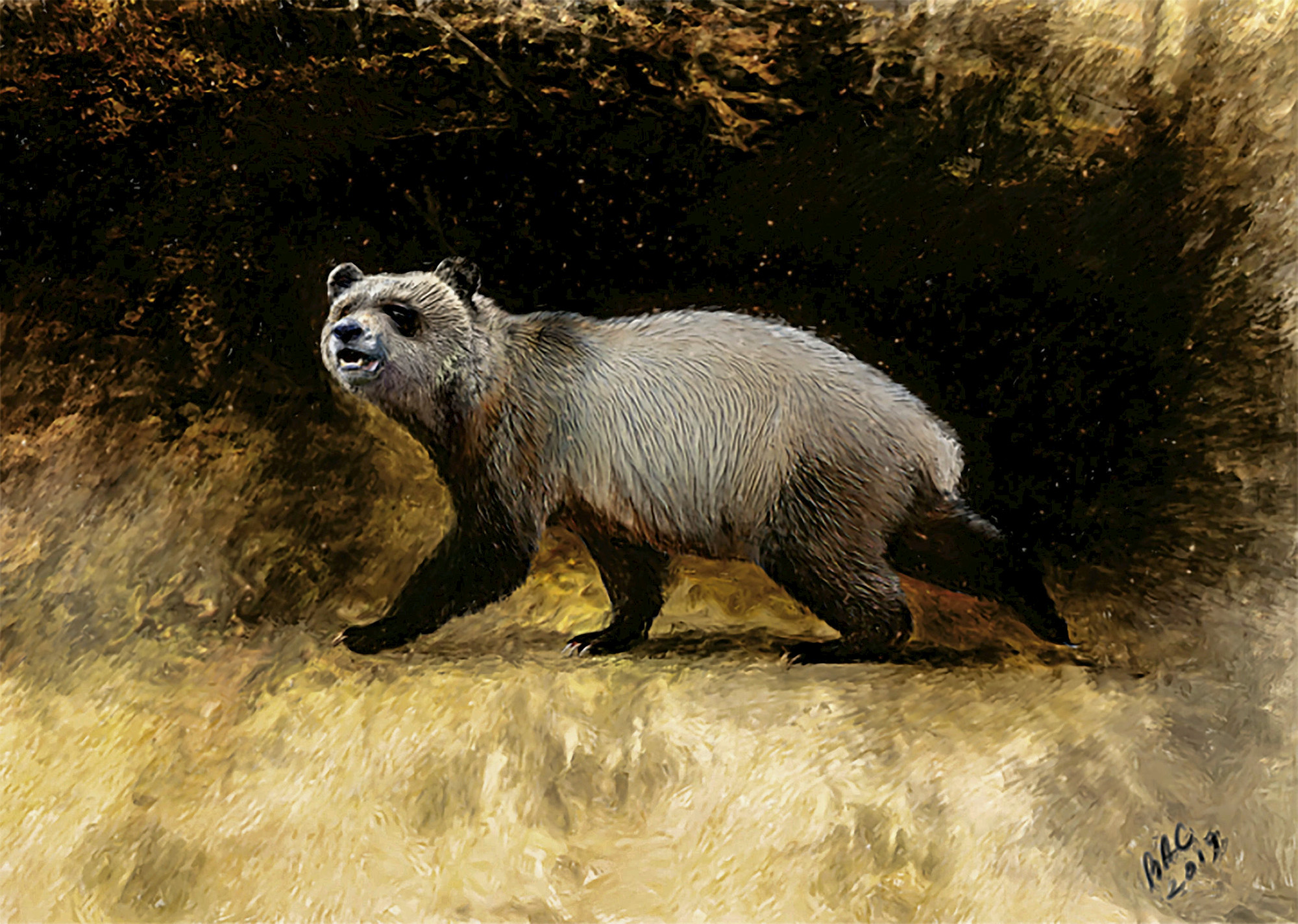 A giant prehistoric panda lumbered through the forests and swamps of Eastern Europe six million years ago, according to new research. Undated illustration. (Velizar Simeonovski,SWNS/Zenger)

A giant prehistoric panda lumbered through the forests and swamps of Eastern Europe six million years ago, according to new research.

Its discovery adds to evidence the charismatic bears did not originate in China – but migrated there.

The bizarre beast is the last known and most evolved of the ancient European pandas.

It was identified from two fossilized upper teeth dug up in northwestern Bulgaria – which had been gathering dust for more than four decades. Remains have also been found in Spain and Hungary.

They were rescued from the bowels of the Bulgarian National Museum of Natural History in Sofia.

An analysis showed they belonged to an ancient and sizeable relative of the modern giant panda.

When on all fours, it was up to 3 feet tall at the shoulder and 6 feet long – and weighed around 250 pounds.

But unlike today’s iconic black and white creature, it was not reliant on bamboo to survive.

The Museum’s director Professor Nikolai Spassov explained: “Although not a direct ancestor of the modern genus of the giant panda, it is its close relative.

“This shows how little we still know about ancient nature and demonstrates also that historic discoveries in paleontology can lead to unexpected results, even today.”

The animal has been named Agriarctos nikolovi – after paleontologist Dr. Ivan Nikolov who added the teeth to the museum’s trove of treasures in the late 1970s.

Prof. Spassov said: “They had only one label written vaguely by hand. It took me many years to figure out what the locality was and what its age was.

“Then it also took me a long time to realize that this was an unknown fossil giant panda.”

The teeth are about seven times the size of a human’s. The coal deposits in which they were found imbued them with a blackened hue.

The panda inhabited tree-lined swamps, feasting on a diet of leaves. They would have been much easier to eat and digest than bamboo!

Fossils of the staple grass that sustains the modern panda are rare in Europe – especially from the late Miocene of Bulgaria when Agriarctos lived.

Prof. Spassov said the fossil record and the cusps of the teeth do not appear strong enough to crush the woody stems.

Instead, it likely fed on softer materials – aligning with the general trend toward increased reliance on plants in the group’s evolution.

Sharing their environment with other large predators likely drove the giant panda toward vegetarianism.

Prof. Spassov said: “The likely competition with other species, especially carnivores and presumably other bears, explains the closer food specialization of giant pandas to vegetable food in humid forest conditions.”

Agriarctos’ teeth nonetheless provided ample defense. In addition, the canines are comparable in size to those of the modern panda, suggesting they belonged to a similarly sized or only slightly smaller animal.

It may have become extinct as a result of climate change, probably because of the ‘Messinian salinity crisis’ – an event in which the Mediterranean basin dried up, significantly altering surrounding lands.

Prof. Spassov said: “Giant pandas are a very specialized group of bears. Even if A. niklovi was not as specialized in habitats and food as the modern giant panda, fossil pandas were specialized enough and their evolution was related to humid, wooded habitats.

“It is likely climate change at the end of the Miocene in southern Europe, leading to aridification, had an adverse effect on the existence of the last European panda.”

Co-author Dr. Qigao Jiangzuo, of Peking University, China, helped narrow down the new species’ identity as belonging to the Ailuropodini – a tribe within the Ursidae bear family.

They are best known by their only living representative, the giant panda. But they once ranged across Europe and Asia.

The paleontological data shows “the oldest members of this group of bears were found in Europe.” said Prof. Spassov.

It suggests they developed in Europe and then headed to Asia, where the ancestors of another genus, Ailurarctos, emerged.

These early pandas may then have later evolved into Ailuropoda – the modern giant panda (Ailuropoda melanoleuca).

The iconic modern animal, with its distinctive coloring, is native to the mountain forests of southwest China.

Their ears, muzzle, eyes, shoulders and legs are black while the rest of their body is white. Their thick hair keeps them warm in the cool, wet mountain zones.

Agriarctos is described in the Journal of Vertebrate Paleontology.