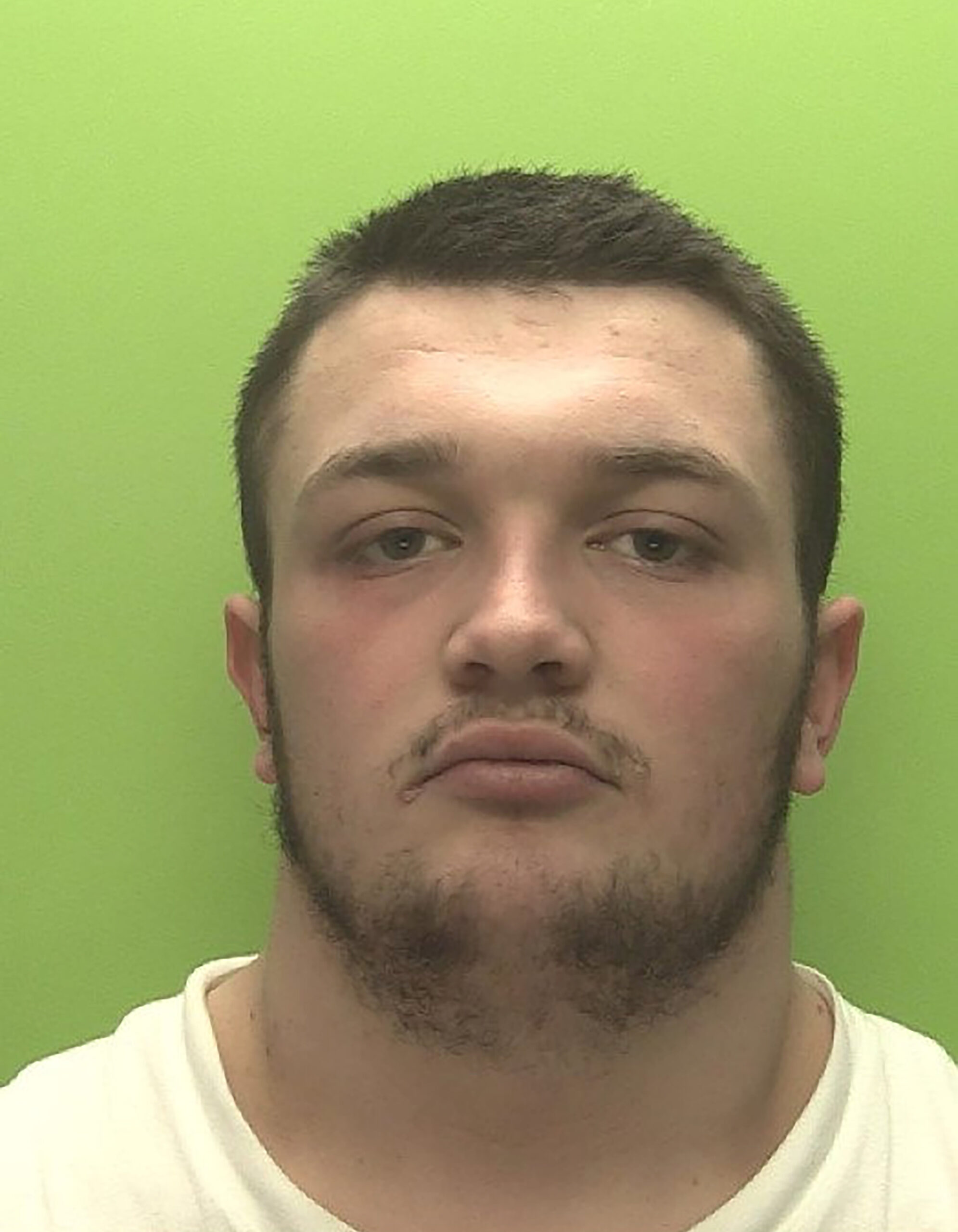 Kyle Turton, who ended a much-loved son and brother's life with a single punch has been jailed. Undated photograph. (Nottinghamshire Police,SWNS/Zenger)

A drunken thug has been jailed for killing a charity fundraiser who died from a single punch while he celebrated his anniversary with his girlfriend.

Kyle Turton, 21, launched the unprovoked attack on stranger Nathaniel Bierley, 26, in the early hours of March 5 in Nottingham city center, in the United Kingdom.

Nathaniel – who was well known for raising money for diabetes charities – was rushed to hospital with serious head injuries but died nearly two weeks later.

Turton, of Clifton, Nottingham, in the U.K., previously admitted manslaughter at Nottingham Crown Court and was jailed for nine years on Friday, July 29.

The court heard Five Guys worker Nathaniel had been out celebrating his third anniversary with his partner when he was attacked in Upper Parliament Street.

The university graduate was immediately knocked unconscious and cracked his skull on the sidewalk as he fell.

He was taken to the hospital but later died as a result of catastrophic brain injuries on March 17 – 12 days after the assault.

The court heard Turton’s friends had described him on the night as being drunk, looking to start a fight and his behavior changed “aggressively and jumpy”.

Detectives identified Turton as the main suspect after CCTV showed him acting aggressively and being the closest to Nathaniel when the punch was thrown.

Sentencing, Judge Stuart Rafferty QC said: “By your completely unjustified and unnecessary actions you brought to the end a life of a young man who had done nothing to you.

“And who on any view did not deserve to die.

“You didn’t intend to kill him that’s true because you are charged with manslaughter, not murder but that doesn’t diminish the impact of what you did to him and his family – who had the awful cruelty of spending day after day at hospital waiting to see if he would live, tragically he did not.

“There will come a time for you when you will go home and you will go back to normal life but for them, that will never happen.

“You didn’t just change his life by bringing it to an end you destroyed him and destroyed their lives.

“You for a long time have been out of control. You didn’t need to interfere with an argument taking place if there was one between the deceased and his partner – you didn’t have to act in the way you did and get involved in something that had absolutely nothing to do with you.

“Nathaniel had not said or done anything to you but you moved in and hit him and hit him so hard that he was unconscious before he hit the ground.

“If you are not ashamed you really should be.”

In a powerful victim impact statement read to the court by his sister, Louisa, she described how their lives had been ruined by Turton’s actions.

She said: “I don’t even know where to start, Nathaniel was the best brother we could ever ask for, he was courageous and always wanted to make a change in this world.

“Our brother always made such a big impression on all of those who knew him and made all of us proud every day.

“He traveled the world and lived his life to the fullest and had so much more to give to this world but that’s been taken away from him.

“He was a great uncle and it would have been nice to see if Nathaniel had children of his own one day but now we will never know.

“He was going to take his younger sister to a car dealership when she passed her test and help her buy a car and because of this, he won’t do that.

“We will never get to see how he would have lived the rest of his life and that hurts us so much.

“I have never seen my mom cry before but in the days when it happened and afterward I did and it absolutely devastated me, hearing how she wished it was her instead – my heart absolutely broke.

“This has not only affected us all emotionally but has had a physical impact on most of us too.

Speaking directly to Turton, Louisa added: “You have taken the life of a young man that was so loved, loved life and was always so dedicated to making a change and standing up for other’s rights.

“The pain and hurt you have caused to all of us.

“You have ruined every birthday and every Christmas because you didn’t just take Nathaniel’s life you took all of our lives when you took my brother’s life.”

In a statement after sentencing, Nathaniel’s family said: “As a family, we know that nothing can bring back Nathaniel, however we would like to thank the Judge for his comments today and the sentence that was passed.

“It is comforting for us to know that Kyle Turton will be spending longer than we anticipated in prison and that he will have a long time to think about what he has done before he can see his family again.”

Detective Constable Rebecca Butler, of Nottinghamshire Police, said: “I firstly want to thank Nathaniel’s family for their support and cooperation during the investigation and the strength and dignity they have shown throughout the court proceedings.

“Our deepest sympathies and thoughts remain with Nathaniel’s family, friends and everyone who knew him, their loss is heart-breaking and as a force we will continue to offer our support.

“This incident shows how throwing even single punch can have devastating consequences as shown in this case that one moment of aggression can result in a lifetime of consequences, regret and guilt.

“This one moment of aggression will now see Turton behind bars for nearly a decade and still under supervision when he does leave prison for another five years.

“I hope this case shows that we will never tolerate violent offenses of this nature and will treat each and everyone extremely seriously and do everything we can to bring those responsible in front of the courts.”