The Azov Regiment is a notorious group of soldiers who were officially incorporated into the National Guard of Ukraine in 2014.
By Joseph Golder August 3, 2022
Facebook
Twitter
Linkedin
Email 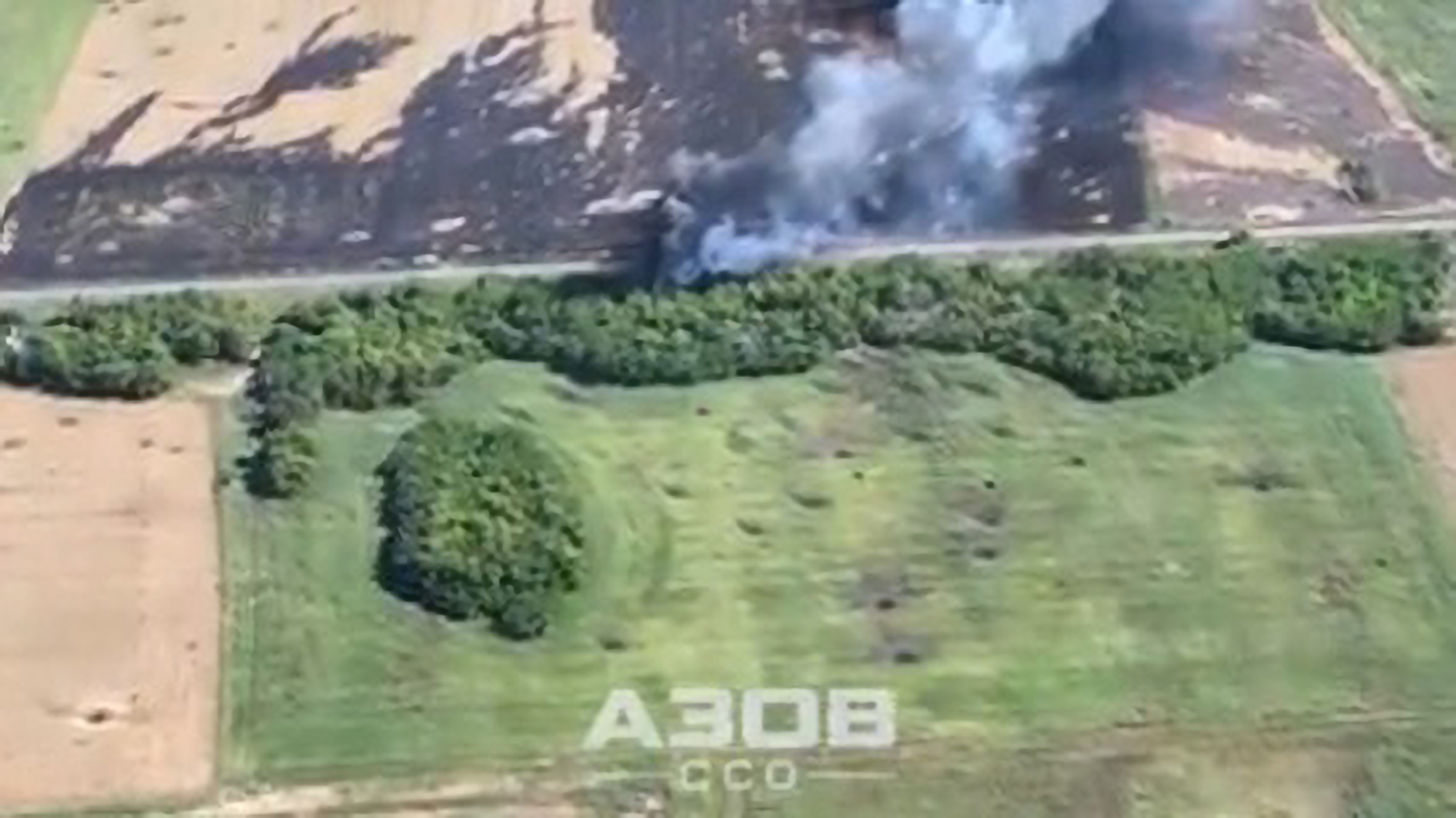 Russian military equipment burns in a woodland belt in the Zaporizhzhia area of Ukraine in undated footage. According to the SSO Azov, the Russian soldiers were also killed during the attack. (@4308sof/Zenger)

These images show how Azov special forces troops hunted down and destroyed two Russian BMP-3s in one day.

The footage shows a series of bombs being dropped on one of the Russian infantry fighting vehicles from a drone before the footage cuts to the same vehicle burning after having been successfully destroyed.

The video then shows smoke rising from a wooded area, with flames then visible on screen. The footage then shows the smoldering remains of the second BMP-3 infantry fighting vehicle from above.

The footage was first obtained from Andriy Biletsky, 42, on the afternoon of Monday, August 1.

Biletsky was the first commander of the Azov Battalion and is currently the leader of the far-right Ukrainian political party National Corps. The party only won 2.15 percent of the national vote as part of a coalition in 2019 and does not hold any seats in the Verkhovna Rada, the Ukrainian Parliament.

The footage was then relayed by the Center for Strategic Communications and Information Security, which operates under the umbrella of the Ukrainian Ministry of Culture and Information, as well as by the Chernihiv Regional Territorial Center of Recruitment and Social Support, both on Monday evening.

Biletsky said that the images show the “work of SSO ‘Azov'” in the “Zaporozhye direction”, which is located in south-eastern Ukraine. ‘SSO’ stands for the Special Operations Forces of Ukraine. It is a branch of the military that is exclusively made up of Spetsnaz (special forces) units.

Biletsky said that they had destroyed “two BMP-3s in one day”. He added: “The first car was destroyed by an attack copter [drone], the second by an Azov tank.”

The Center for Strategic Communications and Information Security and the Chernihiv Regional Territorial Center of Recruitment and Social Support both said: “Soldiers of SSO ‘Azov’ hunted down two BMP-3s in one day. ‘Demilitarization’ of the occupiers and their equipment took place in the Zaporozhye direction.

“The enemy machine in the field was destroyed with the help of an attack copter [drone], and the equipment in the forest belt – with an ‘Azov’ tank. The crews were also successfully eliminated.”

Russia has repeatedly justified its illegal invasion of Ukraine by claiming that it is on a mission to “denazify” the country, despite President Volodymyr Zelensky being Jewish – he lost relatives in the Holocaust – and despite Ukraine’s far-right coalition only winning 2.15 percent of the national vote in 2019.

Russia’s “denazification” rhetoric has drawn widespread condemnation from world leaders and scholars, who argue that it is a distortion of history and factually inaccurate. The U.S. Holocaust Memorial Museum, among others, has said that Russian President Vladimir Putin has “misrepresented and misappropriated Holocaust history”.

A long list of historians and other scholars signed a letter – published in the Jewish Journal and by the International Center on Nazi Persecution, among others – at the end of February, in the early days of the Russian invasion, stating in part: “Russian propaganda has painted the Ukrainian state as Nazi and fascist ever since Russian special forces first entered Ukraine in 2014, annexing the Crimea and fomenting the conflict in the Donbas, which has smoldered for eight long years. It was propaganda in 2014. It remains propaganda today.”

While acknowledging that Ukraine does have some right-wing extremists – “like any other country” – they also argued that it did not justify Russia’s aggression and mischaracterizations.

Zenger News contacted Andriy Biletsky for further comment, as well as the Russian Ministry of Defense, but had not received a reply at the time of writing.