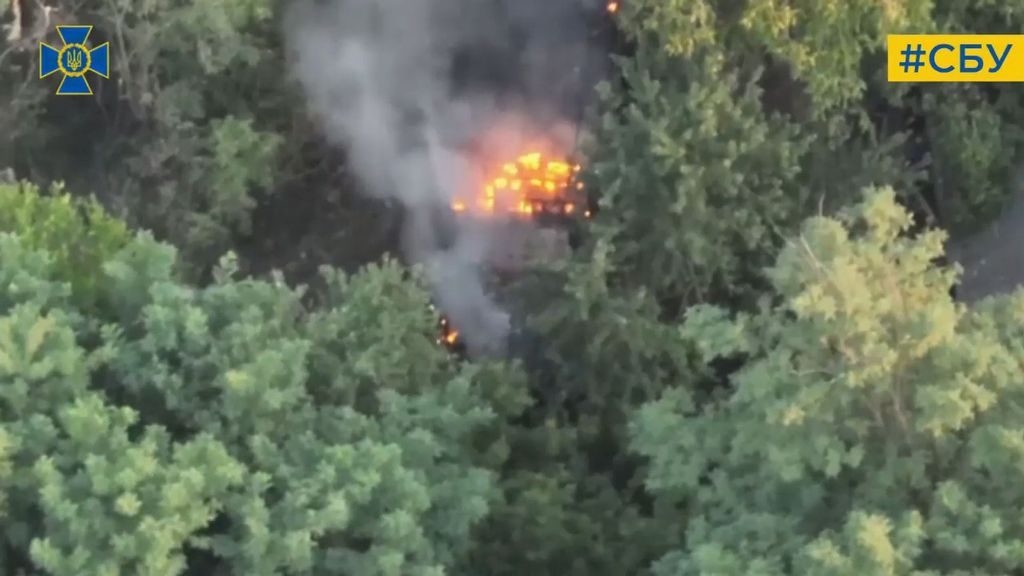 The picture shows flames from destroyed Russian military equipment in Ukraine in undated footage. According to Ukraine's Security Service, three Urals and two BTRs were destroyed in just a few days.  (@SecurSerUkraine/Zenger)

Ukrainian intelligence has said that the country’s special forces have blown up two Russian armored personnel carriers and three trucks over the last few days, as this footage reportedly shows.

The images begin with what appears to be a peaceful countryside, with the footage filmed from a drone and showing a field of sunflowers – the country’s national flower – somewhere in Ukraine.

The footage then cuts to images of Russian military vehicles being destroyed by Ukrainian forces.

The footage shows the vehicles filmed from above as they are bombed by attack drones. The footage then shows other Russian military vehicles being destroyed by other means.

Some of the Russian vehicles can be seen sporting the now infamous ‘Z’ symbol on them. The ‘Z’, as well as the letters ‘V’ and ‘O’, is one of the symbols that can be seen painted on Russian military vehicles taking part in the invasion of Ukraine.

The footage was obtained from the Security Service of Ukraine (SBU) on Sunday, July 31, along with a statement saying: “The Russians sat in the bushes and thought that no one would find them…

“But they did not pass the ‘disguise exam’ – thanks to the soldiers of the Special Operations Center ‘A’ of the SBU, these invaders have now blended into the landscape definitively.

“In just a few days, our special forces destroyed two enemy armored personnel carriers, three ‘Urals’ with strike drones, and also adjusted the artillery fire according to the calculations of Russian mortars.

“We will remind you that recently the Central Security Service ‘A’ of the SBU, in cooperation with the Armed Forces of Ukraine, ‘destroyed’ two Russian SU-25s.

“We continue to work until complete victory! Glory to Ukraine!”

‘Urals’ are understood to be a reference to the Russian-built Ural general purpose 6×6 off-road trucks used by the Russian military and first designed by the Soviet Union, entering production in the late 1970s.