The mom was horrified when she discovered the three-inch long blade in a box of dried mango Wind Ups.
By Simona Kitanovska August 2, 2022
Facebook
Twitter
Linkedin
Email 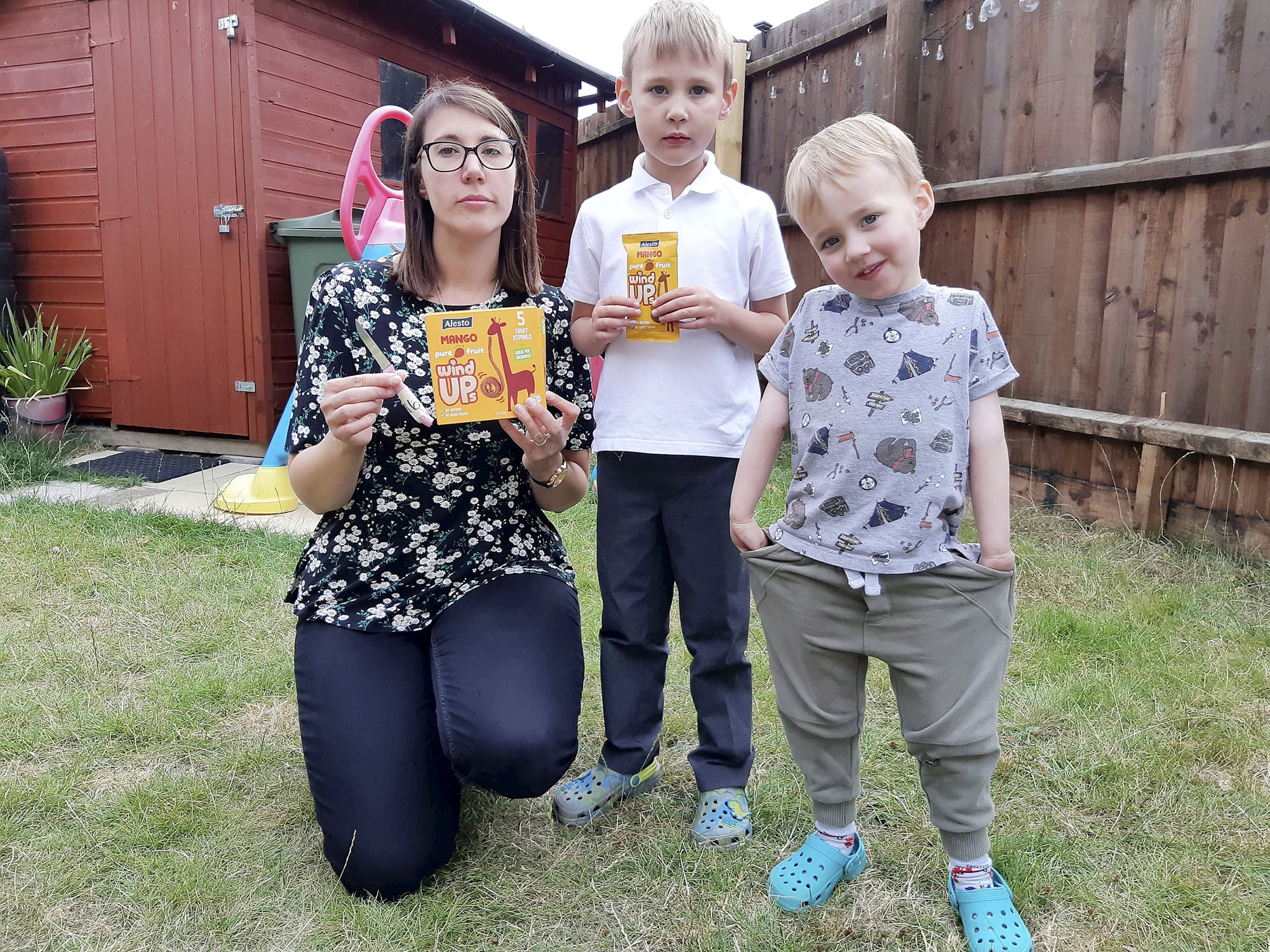 Tracey Croft and sons Kenneth (5) and Corey (3) pose with the knife in undated photograph. The mom-of-two was shocked to find a sharp knife in a box of children’s snacks. (Stamford Mercury, SWNS/Zenger)

A shocked mom-of-two almost cut herself on a sharp knife which she found inside a box of Lidl kids’ snacks.

Tracey Croft, 35, discovered the three-inch long blade in a box of dried mango Wind Ups she had bought for her two young sons.

The mom paid 1.79 British pounds ($2.18) for the snack from Lidl in Ryhall Road, Stamford, in the United Kingdom, last month.

But she was horrified when she opened the box to find a sharp pink-bladed knife next to
three packets of the snack.

Croft, a graphic designer, usually lets her children, Kenneth, five, and Corey, three, help themselves to the fruity treats.

She said: “It was just luck that I opened the box rather than letting one of the boys do it.

“When I put my hand in the box I could feel something strange and saw there were only three of the snacks rather than five inside.

“I could have cut my finger if I’d not been more careful. I shudder to think what would have happened if one of the boys had opened the box.”

On closer investigation, Croft discovered a sharp knife labeled with the number 16,
which had been taped to the handle.

She added: “I couldn’t believe it. I was gobsmacked to find that in a kids’ product.

“It’s pretty scary that something like this could happen. I just want parents to be aware.”

After exchanging messages, Croft has since received two letters from Lidl, accompanied by 15 pounds ($18) in vouchers.

In one of the letters, dated July 20, Jago Heligan from the Lidl quality assurance team, said the supplier “does not use that type of cutting instrument anywhere in the facility” and that products pass through metal detectors.

He added: “We are therefore at a loss to explain how the incident has occurred.”

Croft said: “I didn’t want to cause a fuss and I’m sure it will never happen again but they just seem to be trying to pass it off as OK.

“If it was a child who had grabbed the knife it could have been awful. It has left me cautious about what I let the children open.”

A spokesperson for Lidl said: “We were extremely concerned to learn of this matter and can confirm that, as soon as we were notified, an investigation was immediately launched alongside our supplier.

“We can confirm that safety measures, including metal detection, are in place to prevent products from being compromised during production.

“This is not something that has previously occurred with any items that we sell and, through our investigations we can confirm that no other products were affected.

“We sincerely apologize to the customer for any distress caused and are grateful to them for bringing the matter to our attention.”