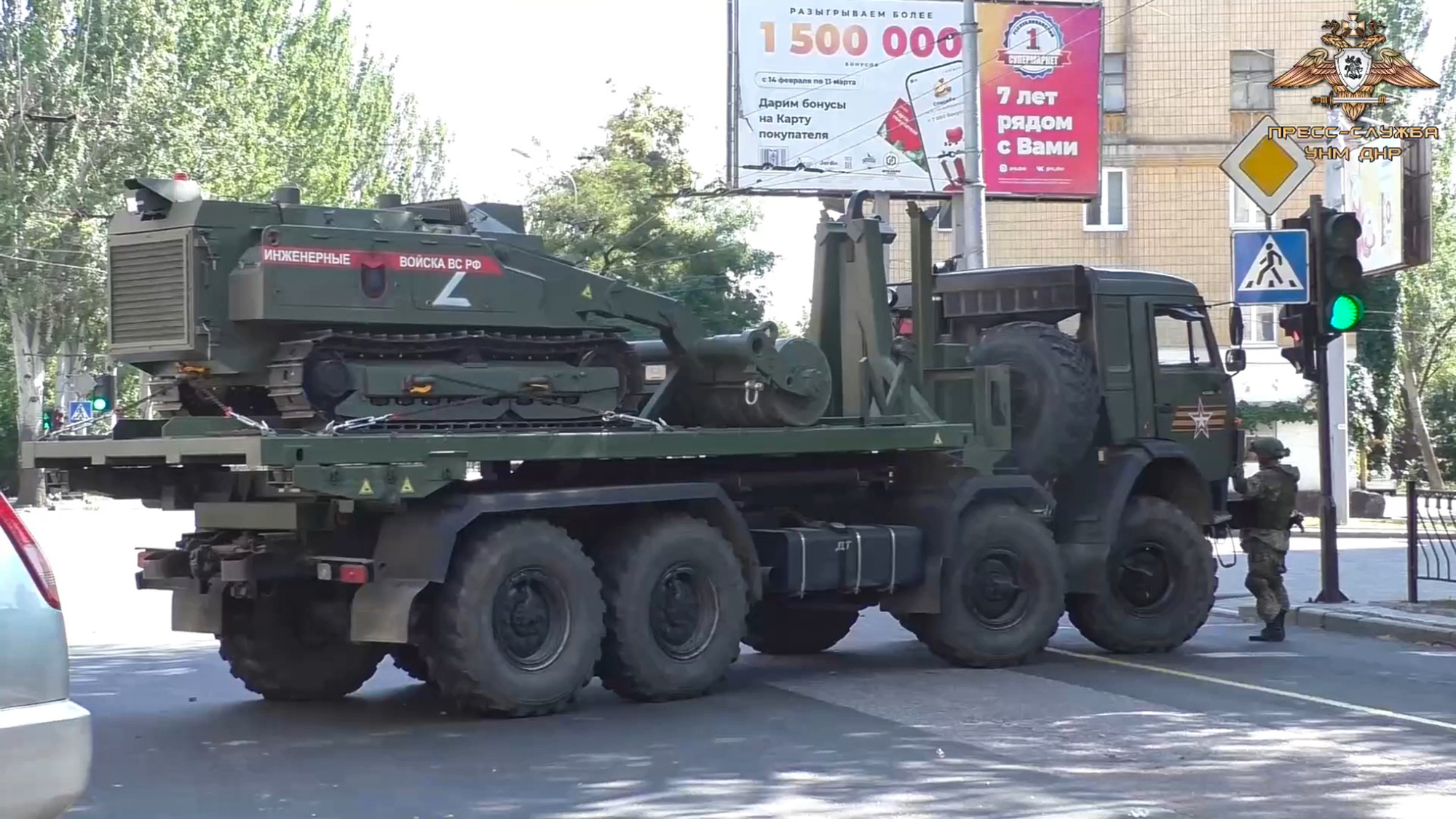 Picture shows a loader with robotic complex Uran-6 on it in Donetsk, Ukraine, Sunday, July 31, 2022. Sapper groups of the Ministry of Emergency Situations of the DPR, together with the engineering troops of Russia, demined the central part of the city.  (@nm_dnr/Zenger)

The pro-Russian, so-called Donetsk People’s Republic has made a show of clearing the city streets of mines despite footage showing apparently bemused locals walking around while the minesweepers work.

The footage allegedly shows members of the People’s Militia of the so-called Donetsk People’s Republic (DPR) and Russian soldiers in full bomb squad gear operating a Uran-6 demining drone that appears to be equipped with a roller at the front, designed to safely detonate mines.

The DPR claimed in a statement that its forces were patrolling the streets of its “capital”, the city of Donetsk in eastern Ukraine’s Donetsk region, to detect and neutralize mines.

It also claimed that these alleged mines – none of which can be seen being detonated in the footage it released – were scattered in the city by Ukrainian forces, which it labels “Nazis”.

Some khaki-colored objects that appear to be mines can be seen at one point on a pavement in the footage. The demining drone can then be seen entering being observed by civilians going about their lives before it enters what appears to be a park.

The DPR claimed in its statement, obtained on Sunday, July 31, that “sapper groups of the Ministry of Emergency Situations of the DPR, together with the engineering troops of Russia, are clearing the central part of the city from PFM-1 ‘Lepestoks’, which were fired at the city from cluster munitions.”

The PFM-1 is a scatterable anti-personnel land mine designed by the Soviets and produced by Russia. Both the Ukrainians and the Russians have accused each other of using these mines since the beginning of the Russian invasion. They are also known as Butterfly Mines or Green Parrots.

The mines can be deployed from helicopters, planes and mortars. They then gently glide down to the ground without exploding.

The Russian state news agency TASS had claimed on Thursday, July 28, that ambulance workers had found PMF-1 mines after an attack by Ukrainian forces.

The DPR also claimed in the statement: “The Ukrainian Nazis inflicted the most inhumane terrorist attack on the peaceful quarters of the city, at the moment, work on the elimination of mines continues. We ask residents to be extremely careful!”

The DPR claimed that the machine being used to find mines allegedly deployed by Ukraine is a Uran-6, which is a Russian land drone used in demining operations.