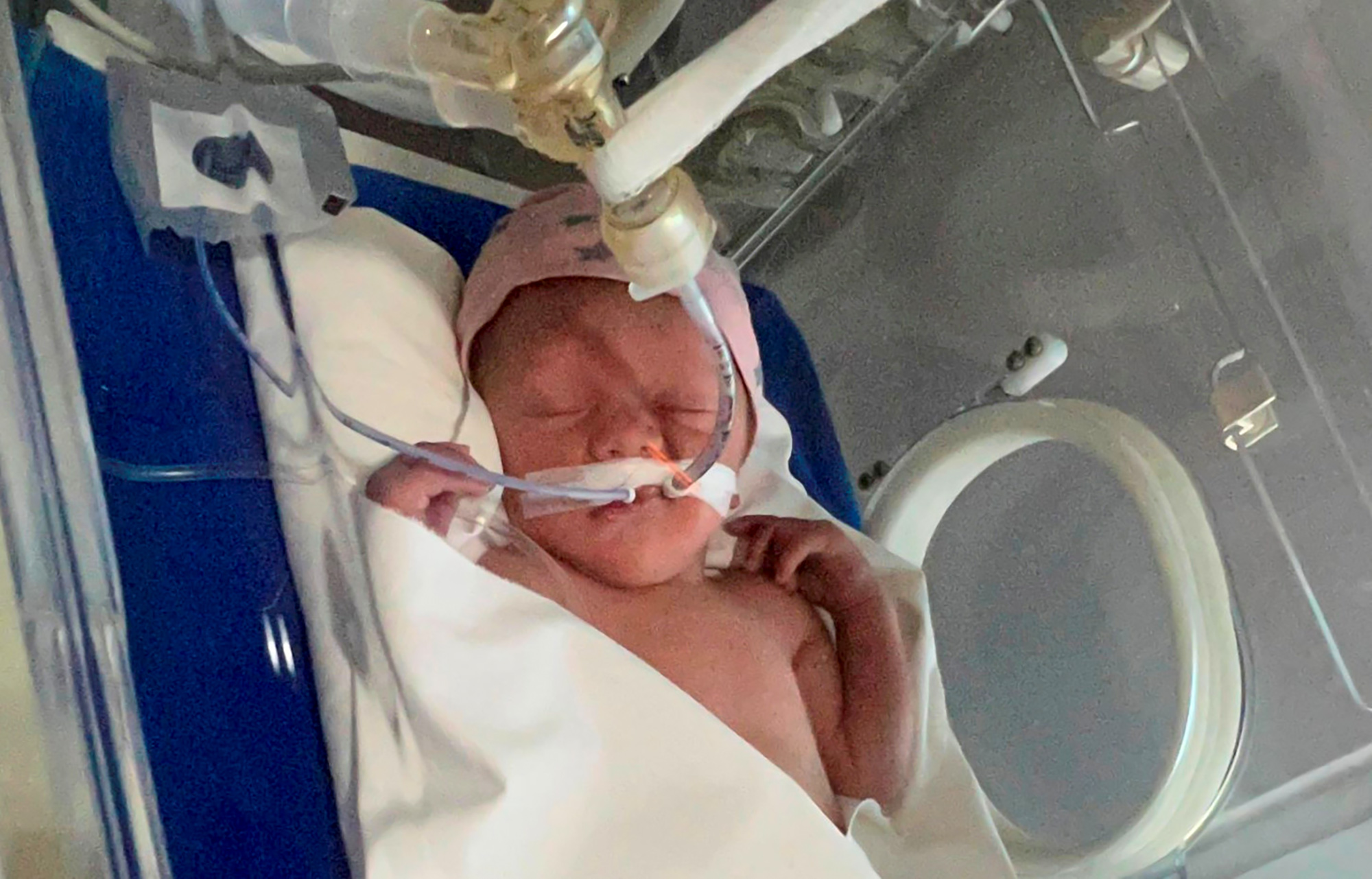 Baby Wolfe in the hospital in undated photograph. Wolfe was prematurely born while his parents were on vacation in Turkey and now insurers won't cover the costs to bring him home - as the baby was two days too early for their policy. (Louise Crawshaw Bowen, SWNS/Zenger)

A newly-wed couple whose baby was born prematurely on honeymoon say insurers won’t cover the costs to bring him home – as the baby was two days too early for their policy.

Bowen had to have an emergency cesarean section on July 25 – and their son is now in intensive care in Turkey to help him breathe.

The couple had a holiday insurance policy which they thought would cover them.

But Bowen was informed of a clause in the small print that said they would only cover insurance if a baby is born eight weeks premature.

Bowen, from Trowbridge, in the United Kingdom, said: “It’s just so unfair that I sorted out insurance to cover all of this and we’re in this situation.

“We’re honestly out of options, and I’m not one to ask for help but we are desperate.

“I’ve seen my five-day-old baby for two minutes – it’s heartbreaking and we need to get him home.”

Bowen had a “fit to fly” medical note before the family left the U.K. for their honeymoon earlier in July.

But that took an unexpected turn when Louise was rushed to hospital on Monday, July 25, in Antalya, Turkey, suffering from intense bleeding and pain – aware she was going into labor.

The couple said there was a “language barrier” between them and the staff at the hospital, when Stephen, originally from Halifax in West Yorkshire, in the U.K., was asked to sign an 800-euro ($820) bill for treatment.

But that initial bill was one of several the couple would get – including another for 4,500 euros ($4,600) just to allow the mother to leave the hospital, which she described as “a prison”, and ongoing costs for Wolfe’s care.

Wolfe was delivered seven-and-half weeks early, he is unable to breathe on his own and has an infection in his lungs.

Doctors in Turkey said he could require at least another three week’s hospital care, and then might not be strong enough to immediately fly after that.

The newlyweds said they might have to sell their house due to their predicament.

Bowen, a nail technician, was given a spinal block for the operation which she said is now giving her continuous headaches.

After being told to book accommodation and keep the invoices the insurance company told them they were not willing to pay.

They said it was because Bowen gave birth seven weeks and five days before her due date but if she was eight weeks or above they would have paid up.

Stephen, who has worked in the army for 11 years, said: “The insurance company are not paying out because of two days.

The mother-of-five added: “Before they made this decision, they were ringing us saying keep the receipts for bills, pay for an extra week at your accommodation, and we will reimburse it all back.

“Then on Wednesday they give us this news – it makes no sense at all premature births are up until 37 weeks.”

Stephen and Louise have already paid 5,000 euros ($5,125) for Louise’s hospital discharge – which they had to borrow from family – a further 5,250 euros ($5,380) for the medical bill for two days for his son and several thousand euros for accommodation.

The newlyweds expressed feelings of “anger” and “disappointment” and added they felt “let down” by the company.

Bowen said her three eldest children, 14-year-old Ty, 11-year-old Daisi and five-year-old Teddy, went back to the U.K. with her friend on Wednesday, July 27.

But the couple are staying in their accommodation, at Grand park Lara in Antalya, with their 11-month-old Ronnie and Wolfe – until they can get him home.

The desperate pair are looking at contacting air ambulances to get Wolfe back to the U.K., but say initial figures are looking at over 40,000 British pounds ($48,850).