Julie Hawkins, 61, was forced to give up her job as a head housekeeper eight years ago when she became ill with Barrett's disease.
By Simona Kitanovska August 1, 2022
Facebook
Twitter
Linkedin
Email 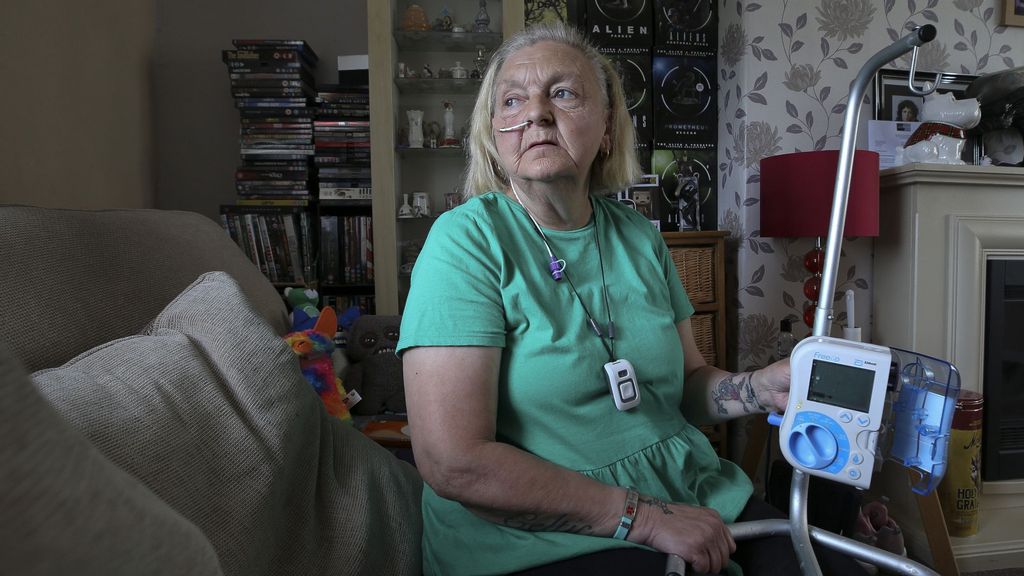 Julie Hawkins, 61, is a disabled woman who's scared to use a life-saving feeding machine due to the electricity use canceled a direct debit to Scottish Power in protest at a hike in her energy bills, in Carstairs, Scotland. Undated photograph. (Newsquest, SWNS/Zenger)

A disabled woman is scared to use a life-saving feeding machine due to the electricity use and canceled a direct debit to Scottish Power in protest at a hike in her energy bills.

Julie Hawkins, 61, was forced to give up her job as a head housekeeper eight years ago when she became ill with Barrett’s disease, which means she cannot consume solids and is repeatedly sick, and also suffers from epilepsy.

She receives 500 British pounds ($611) per month in Personal Interdependent Payments, of which 290 pounds ($355) goes on energy, 60 pounds ($73) is spent on renting a mobility scooter which she needs to leave the house but is too scared to charge up, and spends 24 pounds ($30) on a TV license.

Her partner, Stevie Douglas, 51, is a youth worker and pays the rent on their home in Carstairs, South Lanarkshire, in the United Kingdom.

Hawkins says it’s a blessing she doesn’t eat, as it keeps costs down.

She has been embroiled in a row with Scottish Power which encouraged them to switch onto a fixed deal of 72 pounds ($88) a month – but claims her direct debit quickly shot up to 290 pounds ($355) when the energy cap was raised.

After being told the readings were accurate, Hawkins decided to cancel her direct debit on July 26 and said most of Stevie’s income goes on fuel and yellow-label food.

Hawkins said: “I don’t know what else to do.

“I don’t know what’s going to happen with this direct debit.

“It’s so hard to get them to sit up and take notice.

“I don’t know what’s going to happen if they switch it off.

“I’m so tired of being taken advantage of.

“I wish I could go back to work, I loved my job.

“I just exist from day to day. The plugs are all off.

“The electric is taking it all.

“Stevie spends most of his money on petrol as he needs the car for work.

“I’ve charged my mobility scooter once and I spent 60 pounds [$73] a month on renting it.

“It is just sitting under the cover in the garden.

“I’m just getting so fed up and it’s making me ill.”

Hawkins says she switched to ScottishPower after one of the firm’s salesmen at a stand in a Glasgow shopping center offered her a deal fixed at 72 pounds ($88) a month – but claims her direct debit quickly shot up to 290 pounds ($355) when the energy cap was raised.

She then received a letter from the company telling her she is now 1,100 pounds ($1,345) in arrears – and was stunned when her disability benefit was taken from her bank account to address the debt.

Hawkins, originally from Shrewsbury, Shropshire, in the United Kingdom, added: “I thought I’d managed to secure a good deal, but it soon became clear the cost was much higher. I’d never have agreed if I’d known.

“I’ve explained that my sole income is PIP and I just cannot afford to pay the amount I’m being charged. I’ve pleaded and asked if there’s any way to reduce the debt and cost. No one should be left without any money to survive.

“The PIP money I receive is not enough to cover the rising cost of living. I could afford to pay the rate I believed I was signing up to, but even that’s leaving me with next to nothing. My health is very poor and basically I know I’m on borrowed time.

“Right now, I’m not coping and can’t remember the last time I turned on my heating. I’ve cried so much over this and feel totally helpless.

“Energy costs are going up again later this year and I just don’t know what I’m going to do. I’ve no option but to keep everything that uses power turned off.

“But my feeding machine is vital to keep me alive, without it I will die.”

The cap, which is set quarterly by the energy industry regulator Ofgem is currently at an unprecedented level.

A spokesman for ScottishPower said: “When Mrs. Hawkins became a customer, we based her initial quote on information she provided to us on her energy usage.

“However, the direct debit amount has since been updated based on actual energy usage at the property.

“We have liaised with Citizens Advice regarding her case and our customer service team has shared information on the support available to her.

“We understand her frustration and regret the distress caused, but her bills are accurate and based on her actual energy use.”

ScottishPower says it also provides a wide range of support for vulnerable customers through the Warm Home Discount, a prepayment voucher scheme and the ScottishPower Hardship Fund.