"The 131 eggs have been taken to L'Oceanografic to incubate them and obtain as many hatchlings as possible."
By Joseph Golder August 1, 2022
Facebook
Twitter
Linkedin
Email 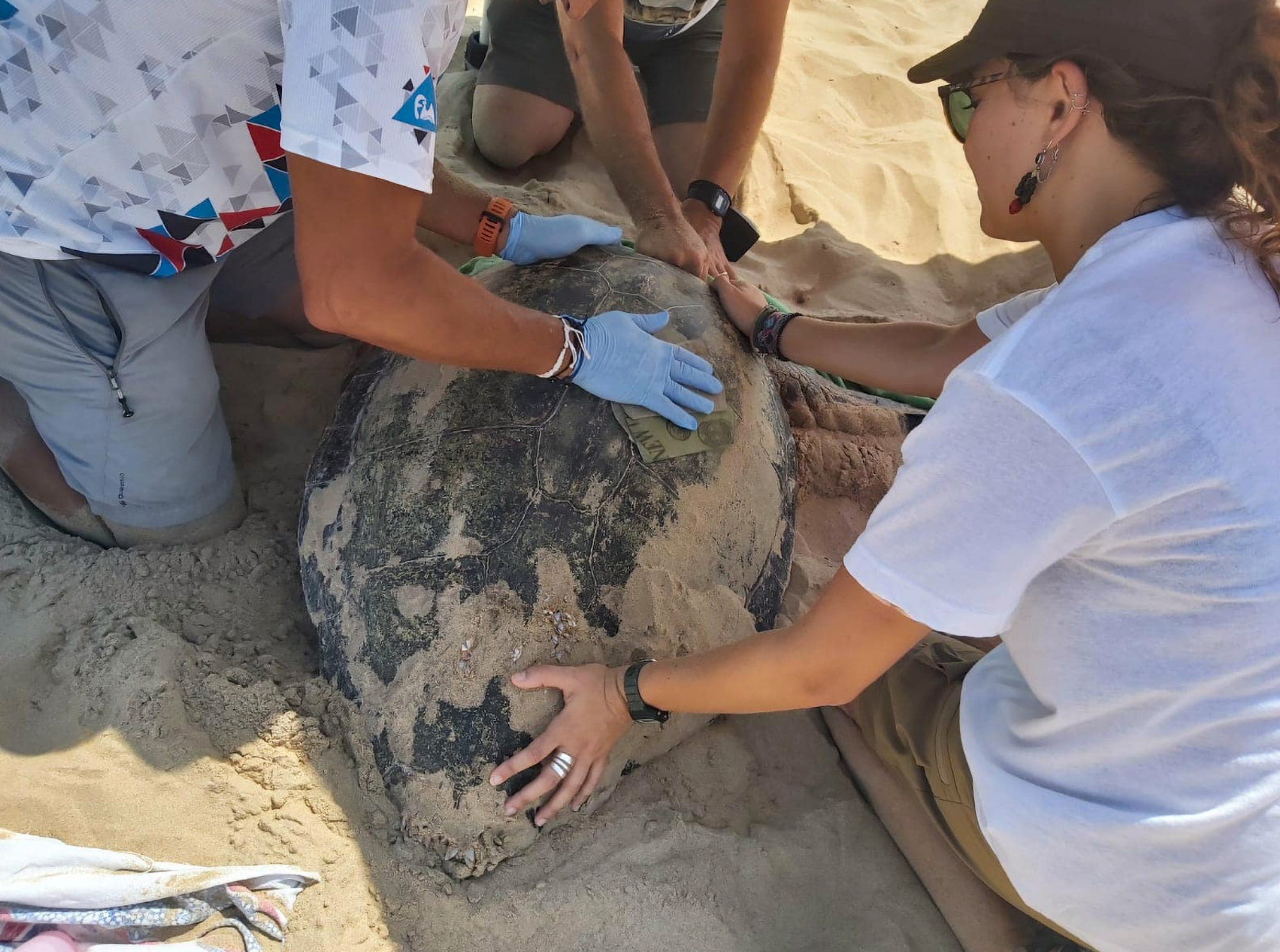 Team members working in the nest of the turtle in an undated picture. It was seen in Alicante beach, Spain, July 2022. (Ayto Guardamar/Zenger)

A turtle stunned wildlife experts when she laid an astonishing 131 eggs in a single clutch on a Spanish beach.

Video footage of the record birth on Les Ortigues beach in the town of Guardamar del Segura, in the south-eastern Spanish province of Alicante, in southern Valencia, shows turtle specialists and volunteers helping the turtle give birth in the shallow nest she had dug, after having fitted the large animal with a GPS transmitter.

Then – understandably exhausted – the loggerhead turtle is carried back to the sea.

As she makes her way into the water, a delighted crowd cheers her on as she powers through the surf.

The turtle, which was fitted with a GPS satellite transmitter so it can be monitored by the experts, according to local Mayor Jose Luis Saez, had reportedly dug a small nest, before laying 131 eggs, a record for Valencia.

Mayor Saez also told Zenger News that the footage was recorded by a local municipal worker and that the turtle was deemed to be in good health after being checked by the experts before it was returned to the sea.

Mayor Saez said that the incident took place on the morning of Tuesday, July 26, adding: “A loggerhead turtle with a shell measuring 78 x 71 centimeters [30.7 inches by 27.9 inches], that has laid 131 eggs, was found this morning on Les Ortigues beach in Guardamar.

“The specimen was half buried in the sand. A GPS locator has been placed on it by technicians from L’Oceanografic and the University of Valencia. Likewise, a review has been carried out that determined that it was in good health.

“An ultrasound predicts that it will continue laying eggs in approximately 15 days.

“This egg-laying event is the largest recorded in the Valencian Community.

“At 2:30 p.m. she was returned to the sea and dubbed Katherine, in memory of a young American marine biologist who recently passed away.

“The 131 eggs have been taken to L’Oceanografic to incubate them and obtain as many hatchlings as possible.”

L’Oceanografic is an oceanarium in the city of Valencia. It is the self-proclaimed largest aquarium in Europe and can house up 45,000 living creatures from 500 different species.

Loggerhead turtles (Caretta caretta) are listed as vulnerable on the International Union for Conservation of Nature’s (IUCN) Red List of Threatened Species.

The main threats to their conservation include human fishing gear, plastic pollution, and the destruction and encroachment by humans on their habitat, as well as artificial lighting that discourages them from nesting and interferes with their offspring’s ability to navigate to the water’s edge.