Austrian media reported that it is the third case of scorpions from Croatia ending up in Upper Austria. 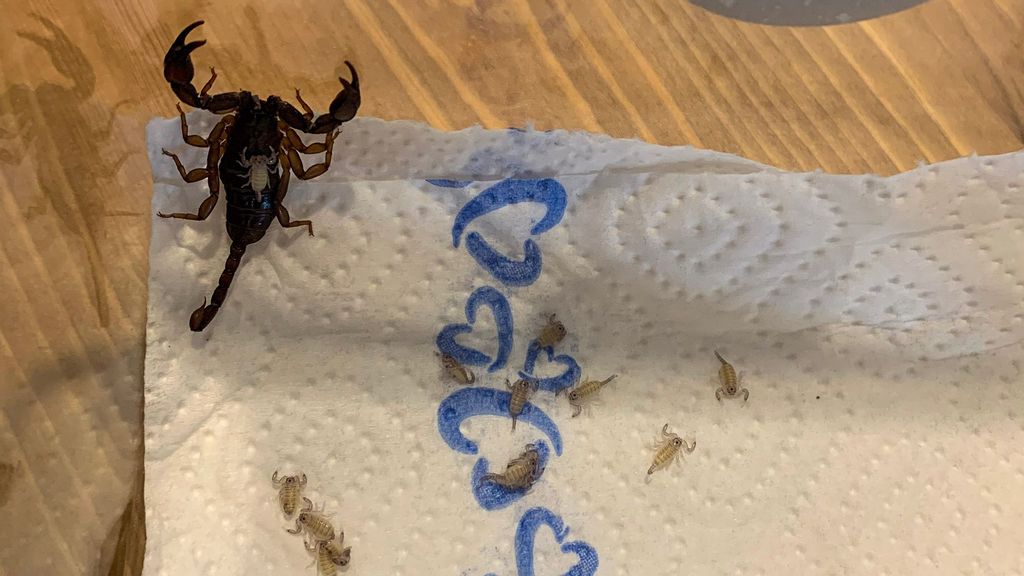 Picture shows a scorpion mom and her 17 babies found by a woman in her suitcase after coming home from her holiday in Croatia in an undated photo. The photo was released by the animal rescue service Tierhilfe Gusental on Sunday, July 24, 2022. (Tierhilfe Gusental/Zenger)

A terrified vacationer got the fright of her life when she found 18 scorpions in her suitcase after returning home from a vacation in Croatia.

The woman was unpacking after returning from her vacation in the Adriatic to her home in Natternbach, a small town in the district of Grieskirchen, which is located in the Austrian state of Upper Austria, on Saturday, July 23.

But when she opened her case, she spotted a whole family of the stingers, sending a chill down her spine.

The woman had reportedly found an amazing 18 scorpions in the suitcase, apparently a mother and her babies.

She called the animal rescue services in Gusental. Tierhilfe Gusental said in a statement issued on Sunday, July 25 and obtained by Zenger News: “This afternoon we were contacted by a lady from Natternbach, because stowaways have nested in the luggage of their Croatia trip.

“More precisely, a scorpion with babies. The animals were secured and handed over to us. They are currently in the Linz animal shelter until they start their return journey.”

Austrian media reported that it is the third case of scorpions from Croatia ending up in Upper Austria.

They said a woman from Linz had discovered a scorpion in her apartment on Thursday, June 30, also following a break in Croatia.

Curiously, she had already been at home for three weeks when she made the skin-crawling find.

This means the creepy-crawly had likely made itself comfortable in the flat for three weeks without being noticed.

Another case – in September last year – saw another scorpion from Croatia found at a home in Upper Austria before it was taken to an animal shelter.

Scorpions are characterized by a segmented, curved tail tipped with a venomous stinger at the rear of the body and a pair of grasping pincers at the front.

Although they live in many habitats, they are most common and diverse in deserts.

In Croatia, scorpions are primarily found on the Adriatic Coast, and are much rarer in the country’s continental regions.

There are only a few different kinds of scorpions that are found in Croatia, and none of them are life-threatening.

While venomous, their poison is too weak to kill a human being. That being said, their stings can cause pain, swelling, itching, redness and a burning sensation.

There are five species of scorpion in Croatia, but only two are common, the Euscorpius italicus and the E. Germanus. Neither of these species are considered harmful to humans.