The pair both love going under the knife so made sure their service had a plastic surgery theme.
By Simona Kitanovska August 1, 2022
Facebook
Twitter
Linkedin
Email 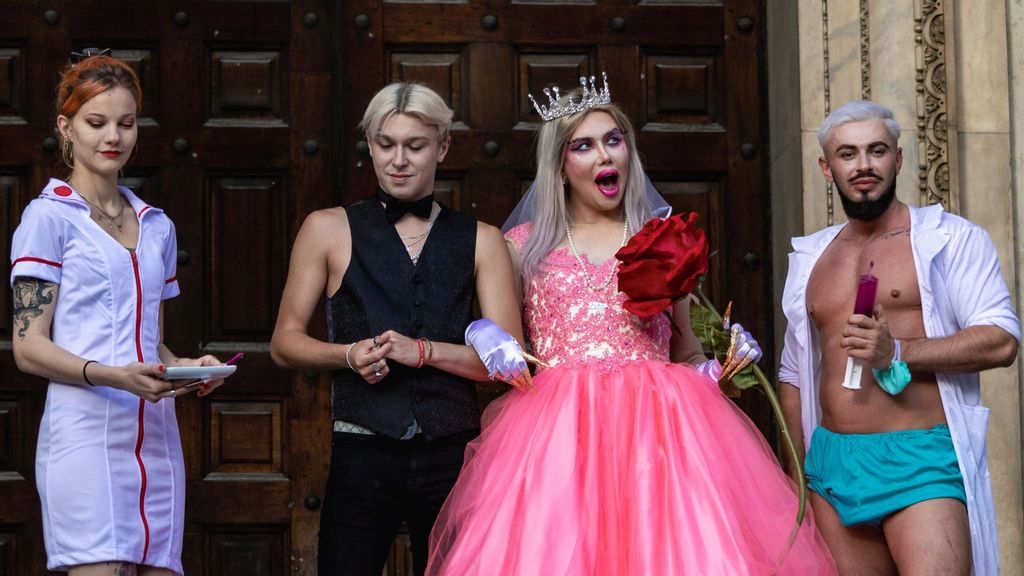 A plastic surgery fanatic and K-pop superfan, Oli London, 32, claims they 'tied the knot in front of a topless priest' in central London, U.K., in June 2022. London is now paying for his partner's plastic surgery to make him look more Korean. (tangerineytangerine, SWNS/Zenger)

A plastic surgery fanatic and K-pop superfan claims they ‘tied the knot in front of a topless priest’ – six months after ‘divorcing’ a cardboard cutout.

Oli London, 32, is obsessed with the group BTS and says they are paying for their new partner to go under the knife to look like a band member.

The Brit, who currently identifies as non-binary, and Danny Richardson, 19, married in an extravagant ceremony in central London, the United Kingdom’s capital, last month.

The pair both love going under the knife so made sure their service, which they say was solemnized by a topless priest, had a plastic surgery theme.

London claims the couple was formally married at a registry office in late June, before holding the ceremony with the topless priest the day after.

It is the second time London has been ‘married’ – after they got hitched to a cardboard cutout of BTS singer Jimin in 2020.

London, who rose to fame on the popular talk show Doctor Phil, said: “At first I was looking for an actual Korean, but that didn’t work out so I married Danny instead.

“When I met him we had an instant connection and our relationship has since gone from strength to strength.

“He’s extremely open-minded and was more than happy to alter his look to make our relationship work.

“The wedding was just a bunch of our closest friends and everyone dressed up as surgeons with syringes and doctors coats.

London plans to fly to South Korea with Richardson in the coming months to pay for more surgery to boost their Korean look.

Together they talk about Jimin every day, and London says Richardson is now just as obsessed as they are.

The couple has a cardboard cutout of the singer in their home along with a Jimin doll – which they think of as their child.

London, who has had 32 surgeries, is also going through the process of transitioning to be a Korean woman, but currently identifies as non-binary.

“‘I used to live in Korea for one year, I love the history, the culture and the people,” they said.

‘I’ve put myself through a lot of pain, I’ve had a lot of surgery procedures to have more of a Korean aesthetic.

“I’m thrilled to have met Danny who is now just as obsessed with the idea as I am, and I can’t wait to see what the future holds for us.”

London ‘married’ Jimin in Las Vegas two years ago, but says they then ‘divorced’ the singer six months ago.

Richardson is now going by the surname London.